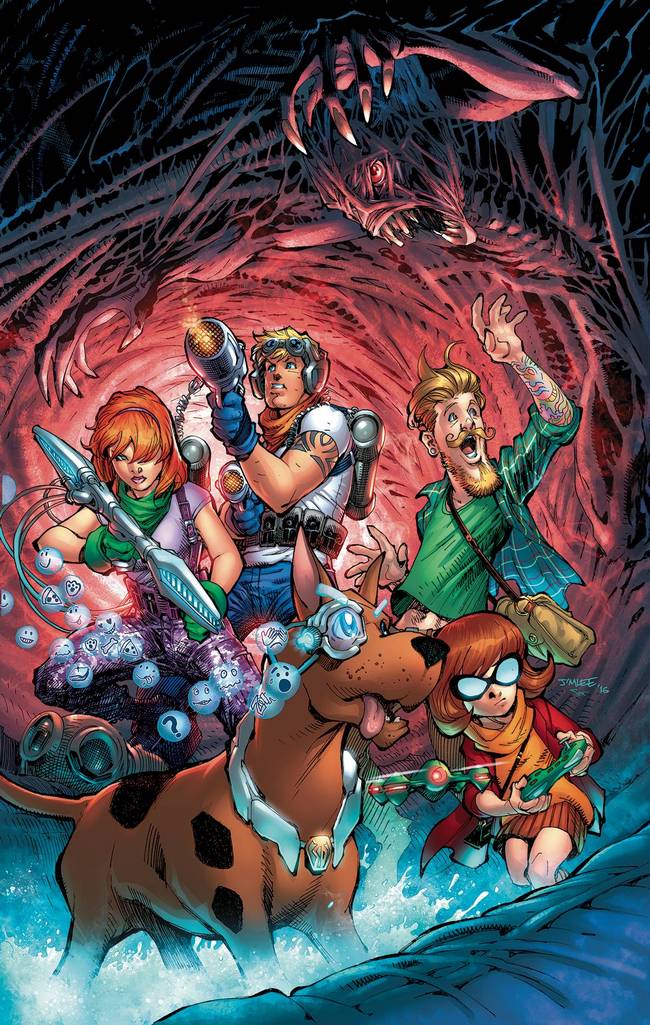 This comic is a riot. The concept is a hoot, the execution is fantastic and I applaud the sequence of events that led to this Scooby Apocalypse existing. Giffen and DeMatteis are the perfect pair to bring this cast of legendary characters into an apocalypse, and they do not miss a beat with this issue. Giffen’s plot is believable, considering the cast, and he redefines their roles very well. The placement of each of the characters is not a stretch from where we know them best, but modernizes each of the characters nicely. Even after a single issue, I find the Scooby/Shaggy relationship makes more sense to me than it ever has before, and their bond is rock solid…as it should be. The concept that adds the apocalypse element is great, and feels like just the right blend of relevant and corny to fit Scooby and the gang. Giffen’s plotting skills are on point and his partner in crime crushes it with the dialogue.

J.M. DeMatteis’ dialogue is phenomenal, capturing these unique voices and keeping the characters true to their origins. Each has a bit more edge to them, but it’s the right level of edge, the kind that puts these characters in an apocalypse rather than a Saturday morning cartoon, but without ever making them feel out of place or wrong. The gang still feels very much like the gang, and the dialogue is such a critical component when it comes to making a book like this work. Velma’s coldness is executed perfectly, Shaggy’s compassion is on display at all times, and Daphne has a great strength and edge. Scooby is brilliantly Scooby, and Fred is…well, Fred (can you tell Fred was never my favourite?), leading to a gang that is meeting for the first time in the issue, but has been together forever in our minds. This is not an easy thing to accomplish, but Giffen and DeMatteis really make the script half of the equation look simple with this comic.

Howard Porter more than holds up his end of the bargain, delivering pitch perfect artwork for this world-establishing-issue. I loved his take on the characters, instantly recognizable, but all different than before, with a bit more edge and realism. He sets the tone of the issue brilliantly, giving Velma and the setting an edge that we aren’t used to seeing in the world of Scooby, but never going too dark, either. His pencils are sharp and there is an immense amount of detail in this issue, with Porter having to pencil several crowds and crowded spaces in a laboratory. At no point does he half ass it, and everywhere readers look, we get detail. This world is rich and dark, yet playful, and Hi-Fi works well with Porter’s pencils to make this a very Scooby world. The vibrant colours give this comic a cartoon feel without ever feeling like a joke, and like Giffen and DeMatteis achieving the right balance between new story and source material, I can happily say that Porter and Hi-Fi do as well.

The concept and setting of the book is very intriguing, and Scooby Apocalypse #1 feels a bit like the Archie Horror titles in the way that characters can be re-imagined and put in very different scenarios but still stay true to their original forms. It shows the depth and range of the characters and when storytellers like Giffen, DeMatteis and Porter get a hold of them, magic happens. Scooby Apocalypse #1 has the perfect blend of fun, drama and action and it is everything I hoped it would be, and much more. This is a fun comic that made me smile like a fool, and I enjoyed it immensely.