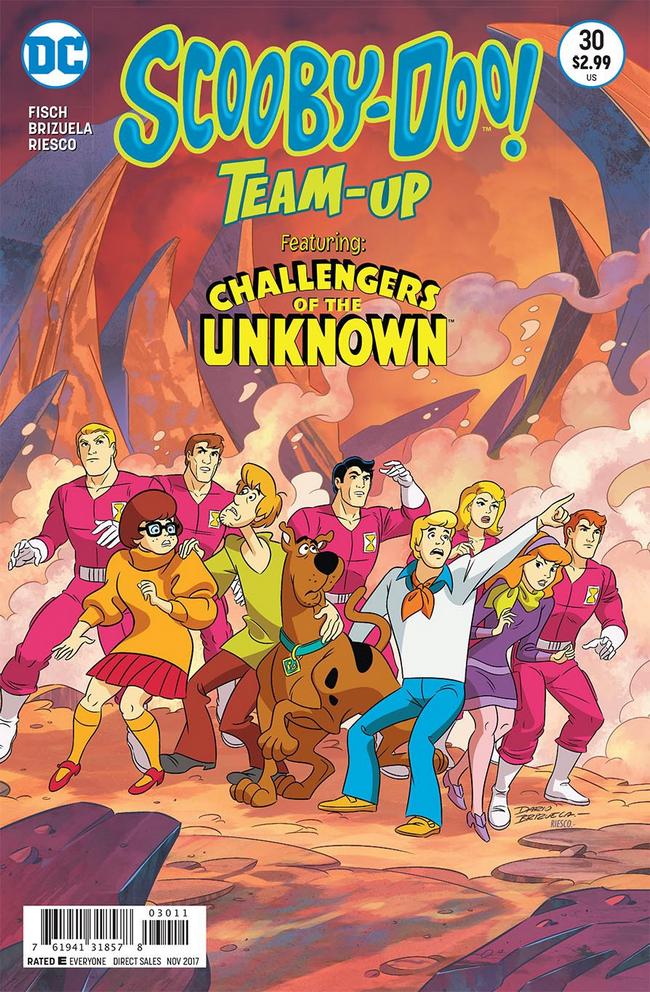 Scooby-Doo and the gang of Mystery Inc. team up with the Challengers of the Unknown, and there is no way you’d ever predict the wackiness that ensues. It’s Saturday morning cartoon hijinks at its very best.

Writer Sholly Fisch isn’t constrained by the rules of comic book continuity. He’s not even constrained by the concept of parallel universes. Everything – and everyone in the Warner Brothers’ catalog – is fair game. In Scooby-Doo Team-Up #30, he makes a magnificent attempt to include a LOT of everyones, in a tale titled “Did Someone Say ‘Team’-Up?”

When a gnome king shows up at the Federal Emergency Management Agency, calls have to be made. Those calls go out to the Challengers of the Unknown and the Scooby gang. Fisch puts a little prickle in the Challengers, having them brush off the younger crew as amateurs, before sending them out to find the story’s McGuffin in front of the Mystery Machine mob.

Scooby, Fred, Velma, Daphne, and Shaggy set out to try to catch up with the Challengers, which leads to a whirlwind of Silver Age DC Universe also-rans. These aren’t the characters that anyone ever claimed as favorites first, but they are the characters so many comic book readers remember fondly. I’m not going to spoil anything here, save to say we get an appearance from a character headlining a Young Animal title (with an extra-fun wink and nod in-story) and no fewer than two other teams popping up before the end of the issue. Sorry, no, none of the teams included here are the Doom Patrol, but Fisch and artist Dario Brizuela are more than welcome to double-back on that group any time they want.

Speaking of Brizuela, his take on the entire cast assembled here (at one point, we check in with nearly two dozen characters) is fantastic and deceptively simple. He makes every character distinct and identifiable, no matter how similar they are in concept or original execution. The characters are all on-model with the regular Scooby-Doo cast, and the storytelling is crisp enough to serve as storyboards for what would be the greatest Scooby-Doo cartoon ever.

As much fun as Fisch has with the script, Brizuela appears to be having with the art, which shines nicely on the pages, thanks in no small part to the sharp, flat colors from Franco Riesco. The colors have shading and depth, but aren’t overworked or oppressive, effectively communicating the story and atmosphere in a deceptively succinct manner, just like Brizuela’s art. Saida Temofonte rounds out the creative crew with smart lettering and lettering effects, including underwater “filters”. The end result is a solid introduction to some classic, beloved DC properties. Fellow Comicositeer Keith Callbeck hit the nail on the head in a tweet, calling Scooby-Doo Team-Up #30 a “Silver Age love note.”

Team-up books are my personal Kryptonite. Put “Team-Up” on a cover and I’ll at least look in that book’s direction. Make the team-up worthwhile and it’s guaranteed money spent. Scooby-Doo Team-Up #30 is both of those and so much more, as the creative fills this comic with great stuff. This is a wonderful team-up tale for fans of team-ups, Scooby-Doo, the Challengers, or any combination thereof.