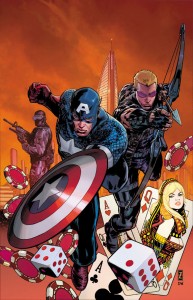 Secret Avengers 21.1 is a jumping on point for a title about to undergo a rather dramatic shift in team members. Fresh off a 6 issue arc by Warren Ellis, Rick Remender comes in to shake up the title and while his new team has yet to go on it’s first mission, I feel really confident that this is going to be one of the best Avengers books Marvel has put out in a very long time. It was announced months ago but I’ve been very curious to read Remender’s take on the undercover Avengers squad and this issue is a fantastic start. Remender is one of the sharpest dialogue writers Marvel has these days and he manages to take long standing characters and titles and add new twists to them. Remender’s Captain America has some serious edge to him – he’s an honest soldier as always, but this Cap doesn’t take any crap and the pages featuring him in this issue were solid gold. This issue in and of itself is entertaining but what got me more than anything was the hype it generates. This issue is positively brimming with ‘you have no idea what is coming’ and anyone who has read Remender’s Uncanny X-Force or Venom issues knows better than to anticipate where this is going. One thing I know for sure is I will be along for the ride….

Patrick Zircher handles art duties on this point one issue setting the stage for the regular series artist Gabriel Hardman. Zircher’s pencils are always solid and this issue is no different, but I did find myself vexed by one part of the issue. There is a part where both Hawkeye & Cap are both in suits rather than their uniforms and I couldn’t tell who was who. I know the characters are similar in appearance, but not being able to tell them apart totally threw me for a couple of pages. The rest of the issue makes up for it, however, and make no mistake this is a well pencilled issue.

Cons: The art threw me in a couple of places, and while it was strong elsewhere, it keeps this one from a perfect score.