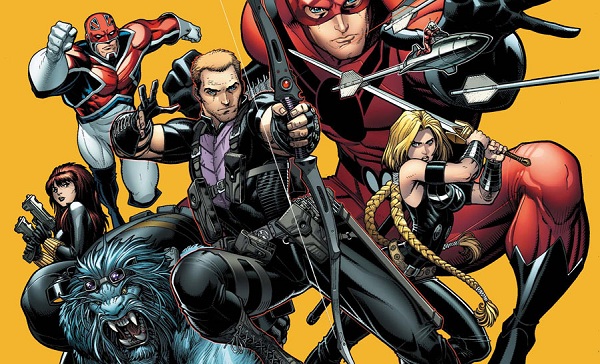 This title could have a giant sticker on the front that says ‘this one’s for you, Aaron’ so I’ll admit that this review could seem a bit biased…Secret Avengers has just undergone a creative team and roster change, throwing some of my favorite characters into one of the most entertaining team dynamics in comics. Rick Remender is at the helm and it really seems that whatever he works on for Marvel these days is solid gold. This team has a similarity to his Uncanny X-Force in that they are the black ops team of the Avengers, but Remender does an excellent job of keeping the tone of this book completely different than UXF. This team isn’t as cutthroat is their mutant counterparts and I applaud Remender for throwing this team straight into the fire. We’ve got some new foes in this book to keep things interesting and rather than spending an issue introducing the new team, we get to see their chemistry (or lack thereof) on display immediately. Remender writes a great Captain Britain, and I have to admit that as a huge fan of that character I’m somewhat in my glory as he returns to some focus in the Marvel U. This issue is a great jumping on point for new readers of the title and is yet another victory in Remender’s recent streak.

On art detail Gabriel Hardman is handling penciling duties now and his art sets an excellent tone for Remender’s script. Few other artists can pencil an espionage based book the Hardman can and each page reflects the “secret” aspect of this team. Hardman pencils this diverse team well, with Beast looking menacing when needed and intellectual at times as well, by no means an easy feat. This is one of those great issues where the script and pencils mesh well and I look forward to issue #23.

Cons: A little confused in parts of what enemies were doing what, but that’s a minor quibble.