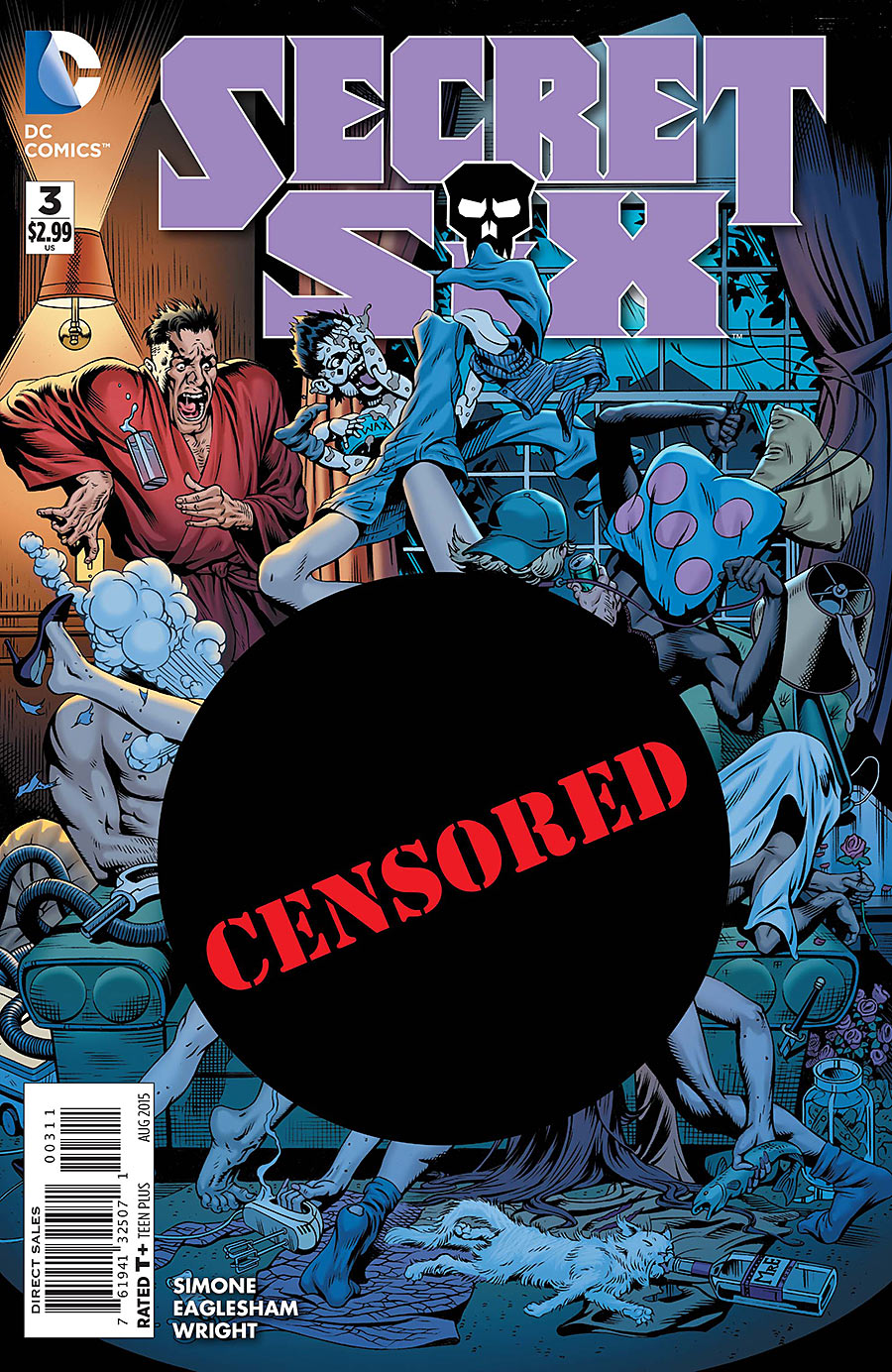 The Secret Six have retreated from the grasp of Mockingbird, but you know the old saying… out of the frying pan and into the fire? The only place they have to hide is now Big Shot’s home in the suburbs. And if you thought being trapped in an electrified coffin was bad, just wait until you meet the new neighbors.

It’s been a long, long time since the last issue of Secret Six came out. So long, in fact, that I was a bit nervous about what to expect from the series when it returned. It was an inopportune (although, as I hear, unavoidable) break in the monthly schedule, and at a pretty critical point. After two issues of reintroducing us to Catman and giving us a glimpse of some of the other players, the third issue was the one that I expected to see take off on the series’ mandate.

Fortunately, in many ways that’s what happened here — just not in the way I anticipated. Secret Six #3 picks up where we left the team, both literally in regard to the narrative, and figuratively in regard to the history of the team, as this issue sees the return of original series artist Dale Eaglesham to interiors. And to be perfectly honest, Eaglesham hasn’t missed a beat.

All of his characters, but particularly the one he is specifically returning to — the Catman — feel like they are having the DNA of the classic Secret Six woven into them as the page turns. From the off-kilter framing to the artist’s trademark extended musculature, Eaglesham’s stamp is now all over this team and their endeavors. And it makes for a book that really feels like the team we left behind 4 years ago, even with a cast of radically different players.

There’s a smart framing device starting each mini-chapter of this suburban drama that’s begun whereas the eyes of each protagonist are narrowed down on. Because so much of the narration in this series so far (and very clearly so in this issue) is predicated on unreliability and lies — or secrets, as the case may be — this focus on the very telling eyes is perhaps the part of the story that grounds everything else. It’s what shows us Strix’s vulnerability best. Catman’s anger, Alice’s exhaustion, and Scarface’s madness. And that’s a heap of drama without ever having a prolonged action scene or explosion.

Simone’s care for the characterization of each member is clear, still taking the time to develop each member of the team individually before subsuming them into too much interaction. Where she does, however, the moments are emotionally crushing. Seeing Strix’s anxiety at not knowing what it means to set a table is perhaps the hardest scene to get past without choking up. And having Porcelain’s calm and cool exterior crack to show their (well-placed) anger without ever losing their grace is a nice moment to take in as well.

But the real joy of this issue comes with the last page reveal that I could not have predicted in a million years. And no, I’m not talking about the identity of Mockingbird (if indeed that’s not a red herring). Long time fans are going to be walking around with their mouths open on this one, and all I can say is, “In Gail I Trust.”

The only trouble with this issue is somewhat of a big one — it’s that we’re still months in and dealing solely with set-up and team-building. Splitting art duties between Ken Lashley’s much rougher style and Dale Eaglesham’s buttoned down line likely would have been more distracting with a subsequent month schedule, although I wonder whether narrative location and mission might alleviate that particular concern in the long run.

For all its small tender moments, Secret Six #3 is an issue I can heartily recommend to fans old and new alike. It’s the best chapter so far to introduce you to the newest players and their personalities, and frankly, barely needs #1 and #2 to be understood and absorbed. But for old school fans of the team’s debut in Villains United, seeing the team of Simone and Eaglesham reunited is more than worth the price of admission. Plus, weird sex on the couch. How can you beat that?