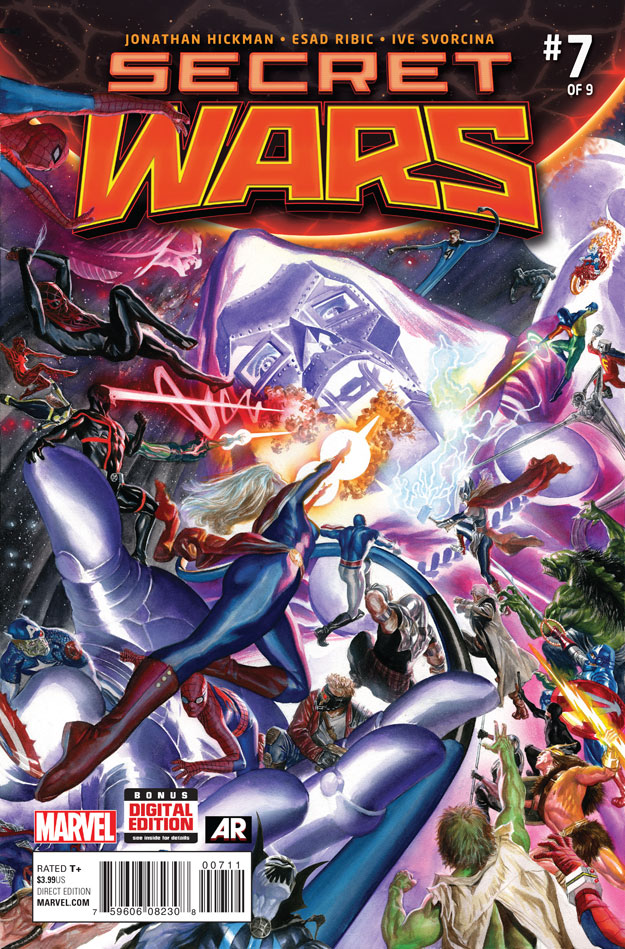 Let’s cut right to the chase: Secret Wars #7 is a good comic, but damn, those delays have hurt the flow of this story.

Jonathan Hickman’s epic story is coming to a conclusion well after the rest of the Marvel Universe has moved on and, as much as I have loved his work on Avengers and everything that came before it, the timing of this issue did hurt my enjoyment of it. This comment is not coming from a standpoint of the events not “mattering” anymore or being spoiled, but rather from the perspective of a crippling blow to the flow of this story. Any momentum coming into this issue was lost a long time ago and while this comic features some pretty wild action in the mega melee that is bringing Secret Wars to a close, there were multiple plots where I had to think back pretty hard to determine who was doing what and where they were doing it. Now, once I got over all that…

I enjoyed the comic. Secret Wars is a truly epic series and coming to one heck of an explosive finale, as well it should. Hickman has been building to this point for years and the payoff looks like it is going to be pretty big once this is all over and done with. Doom’s world is crumbling around him as titanic forces are erupting and the final pages of this comic were very interesting. Epic events are going down in this comic and even if the rest of the publishing line has moved on, for the most part, watching Secret Wars come to a close is one hell of finish.

Esad Ribic’s artwork is as consistent as it has been all series long and he excels at delivering the huge moments that are occurring in these pages. Secret Wars #7 is really an issue of massive proportions with the most powerful characters in the Marvel Universe slugging it out in a brawl for the ages. I’ve never seen a war quite like this in the pages of comics and Ribic’s flair for the big moments really shines in this issue. He handles the massive cast very well and if the teaser for issue #8 is any indication, the biggest moments of this series are yet to come.

Secret Wars #7 is a good comic. It’s hurt by scheduling, but it is a good comic. Hickman and Ribic are going to bring this event to one hell of a massive finale and the wild events of issue #7 seem to just be the beginning. I’m in for issue #8 whenever it gets released, because no matter how you slice it, Secret Wars is a good comic.