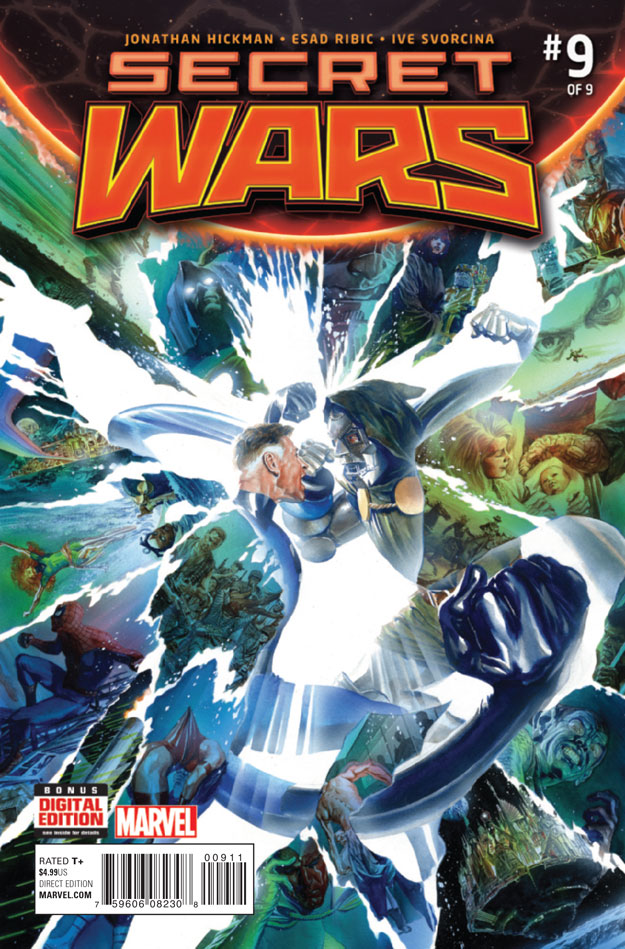 The era of Hickman has come to a close. This is the end. This is Secret Wars #9.

Jonathan Hickman had a monumental task before him: bring down Battleworld in a plausible way and restore the Marvel Universe to a planet he had previously destroyed…oh, and tie it into all those other books you did, ok? As a huge Hickman fan I am happy to say that he pulled it off. He actually did it. He pulled together years of storylines he had built, tearing apart worlds, galaxies, and more and he managed to bring it all home with Secret Wars #9. To say that is no easy feat is a ridiculous understatement, and this comic feels like Jonathan Hickman is having a well deserved mic drop moment as he leaves Marvel for the foreseeable future.

He boils this conflict down to the two on the cover. This is all about Reed and Doom, as it always has been. Hickman’s Reed Richards is about the only one I have ever been able to stand, and he gave me a lot of great Reed moments throughout this comic. I’m not sure if these moments will hit home for readers who haven’t read all of Hickman’s Marvel work, but having read and loved his Fantastic Four run, this feels like the proper conclusion for everything Hickman has built. His Reed Richards has always been different than other writers’ takes on the character, and his interactions with Doom in this issue are magnificent. These two titans should be the reason a world falls and another rises, and Hickman gives them a worthy battle to close this series out.

This single issue isn’t without fault, as it deals with some pretty out there concepts in a very short amount of time, which readers will have to accept and move on, but I applaud Hickman giving things between Reed and Doom time to conclude. The epilogue of the issue, for lack of a better term, is brilliantly executed and explains some of the All-New, All-Different, world in an interesting way. Hickman certainly sets up situations for other writers and artists to explore in fascinating ways, and books like The Ultimates and the upcoming Spider-Man title get a nice nod from the end of this issue. Hickman has a lot to cram in here and I believe he focused on the right pieces. The “science” of Molecule Man and how he works isn’t really the core of this, it’s about the characters and Hickman brings Secret Wars to a conclusion nicely with the mega cast of issue #9.

Esad Ribic leaves nothing on the table with his artwork in this issue, going for broke with each page. The brawl between Doom and Richards is phenomenal and the way Ribic evokes the power of the titans clashing in this issue is fabulous. He nails the tone of the quieter moments as well, and as the big reveals just keep on hitting at the end of the issue, Ribic delivers with a wide range of characters in a wide range of settings. This is not an easy script to pencil, but Ribic is a storyteller that, like Hickman, excels with grand scale and big moments. He closes out his work on Secret Wars nicely with this issue and his work with Ive Svorcina continues to be a strong match. The colour work is as strong as the pencils and with all the energy exploding from characters in this issue, Svorcina was certainly up to the challenge. His colour work with Doom, in particular, emanates power at the beginning of the issue and really sets the tone for the artwork and the story.

It wouldn’t be right for me to not speak about the mighty Doom as Hickman’s time with the character comes to an end. Spanning far beyond the scope of this single issue, Hickman’s work with the character has been amazing, defining one of comics’ most famous villains and putting a stamp on the character that may never be matched. He handles the character with the respect God Doom deserves in this issue, showing him for all his faults and strengths as Battleworld’s fate comes to a head. Like Brubaker’s character defining work on Captain America, what I will remember Hickman’s time at Marvel for, even more than Reed Richards, the F4/FF or the Avengers, was his work with Doom. To say it was impressive would be a slight to the Lord of Latveria, and we wouldn’t want to do that.

Forgive my digression there, but what can I say, I had to. Secret Wars #9 is a damn good comic. It is everything one could expect from Hickman and it cements his Marvel legacy as one of the best long-scope writers the company has ever had. It’s a game changer for the Marvel Universe and, somehow, Hickman brings this all home in grand fashion. I had come to believe that Hickman and Ribic had built something so big here that the conclusion could never satisfy the build up, but it did. Secret Wars is over and it was f***ing amazing.