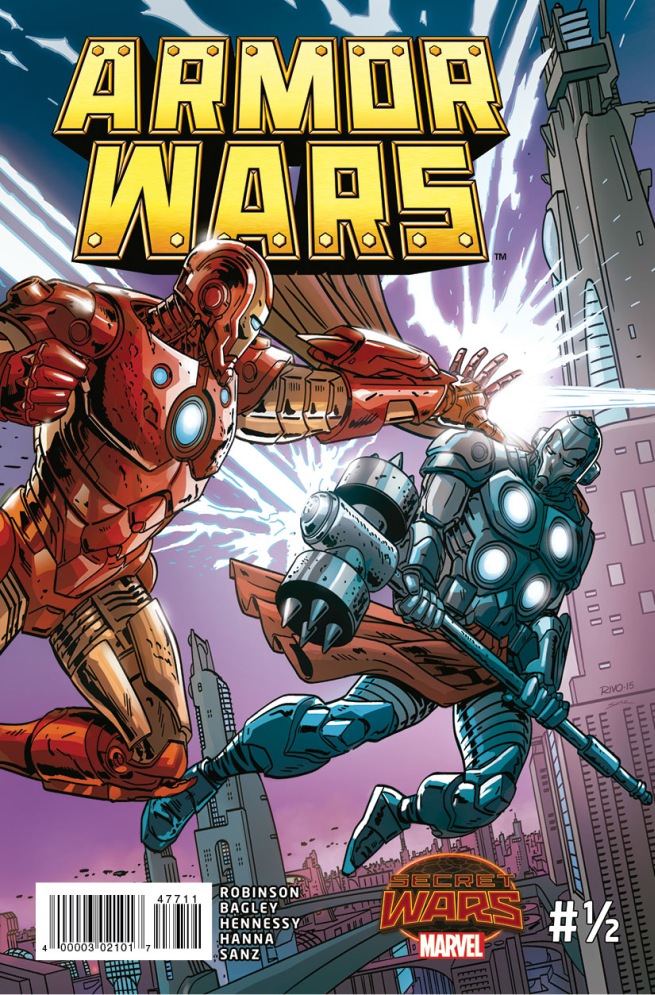 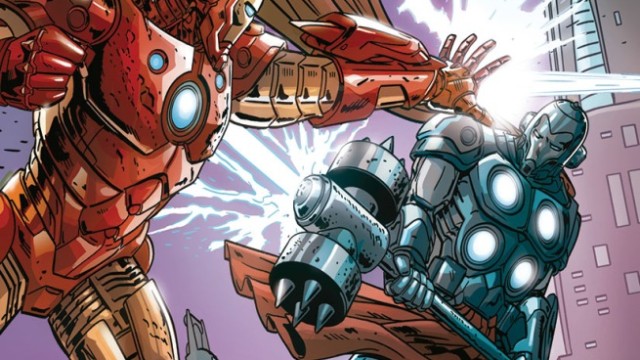 Marvel and Toys R Us have teamed up to provide customers of the famed toy retailer with an exclusive prequel to one of the big Secret Wars miniseries. As part of the “Avengers: Age of Ultron Retail Program” anyone that spends at least $25 in store or on toysrus.com will receive this special twelve page story by two comic book stars in writer James Robinson and artist Mark Bagley. The creative team may only have twelve pages to play with, but Secret Wars: Armor Wars #1/2 is far better than anyone could ever expect a comic of this nature to be.

James Robinson is able make twelve pages feel a little bit longer by squeezing a lot into the limited pages he has to work with, including an introduction to the first Battleworld Domain to be seen by readers. Technopolis is a domain overseen by Tony Stark where a virus wiped out mankind’s ability to live without suits of armor to keep them alive. In a way this is the original origin of Iron Man expanded in a logical way to fill a whole domain of characters. The focus character for this issue is James Rhodes, whose position as the Thor of Technopolis provides some insight into the greater Secret Wars story with a little information of how the concept of Thor works on Battleworld. The inciting conflict of the miniseries is revealed, as are the central characters that Iron Man and Rhodey Thor will be up against come June. There is a really cool Blade Runner-esque futuristic noir vibe to the story with the awesome visual designs of the individual suits of armor playing off the action and mystery in a really cool way. There’s a little bit of introduction, a little action, and a little setup that combine to make for a nice twelve page prequel.

Mark Bagley is joined by inkers Andrew Hennessy and Scott Hanna, along with colorist Esther Sanz on art duties. It must be noted that Bagley will be working on Secret Wars: Ultimate End during the summer long event. I feel this will fit his style much better than Armor Wars would, as his work here is serviceable, yet unremarkable. The art isn’t bad by any means, and the futuristic noir vibe mentioned above is setup through art as much as it is the plot. The highlights of the issue visually are the design work of the characters and the domain itself. The concept of the miniseries lends itself to some really cool visuals with characters who we have never seen don armor forced to wear some for the first time. The design work from Bagley is stellar, but armor don’t fit his style at all. This is the artist readers know most from Ultimate Spider-Man, and the nimbleness of Spidey is much more in his area of expertise than big suits of armor. Bagley knows how to lay out an action scene with the best of them, but the execution of individual characters here is far from his best work. Although it doesn’t necessarily fit his style Bagley does his job here, and I can’t wait to see what artist Marcio Takara does with the miniseries proper.

Overall, Secret Wars: Armor Wars #1/2 is a solid prequel issue that made me far more excited for Secret Wars: Armor Wars coming this June than I had previously been. It’s not often that you see a prequel issue offered exclusively to a toy store, and you wouldn’t expect a creative team of this caliber to be featured on such a project. In that case this was a pleasant surprise, but there is only so much you can do in twelve pages. While a good introduction to the upcoming series, this issue is by no means a reason to go out and spend $25 at Toys R Us. With that said, if you were planning on buying some Avengers: Age of Ultron toys this issue is a great extra that should persuade you to buy them at the toy store behemoth, especially if you’re looking forward to the Secret Wars event