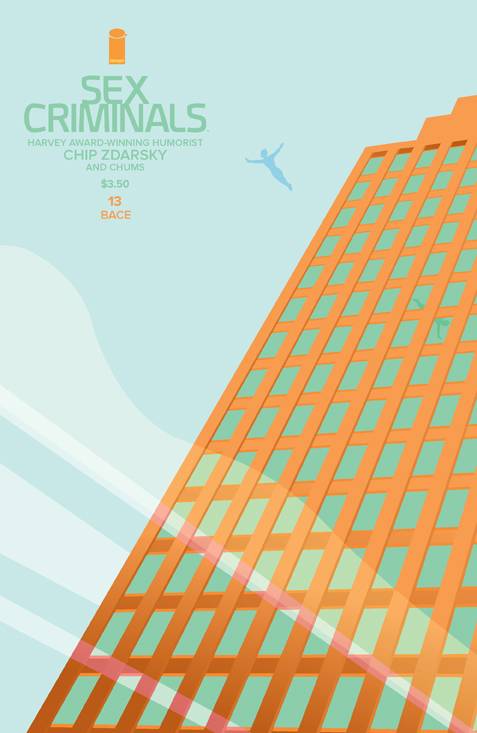 Sex Criminals is known for pushing boundaries with regards to tackling difficult or taboo subject matter, and issue 13 is a shining example of this. Pushing representation to the forefront while maintaining the humor and charm that readers are accustomed too, Matt Fraction and Chip Zdarsky have created another excellent issue.

Taking a break from the lives of Jon and Suzie, issue 13 introduces readers to new character, Alix. Alix is the first character in Sex Criminals to present as asexual and the only character so far who is able to reach The Quiet through means other than orgasm. Currently working in what appears to be a fairly high powered position Alix’s backstory does not reflect either a childhood or adolescence in which she was ever afforded anything even remotely similar. Alongside a long fought internal battle against her own and society’s expectations regarding her sexuality, Alix has had to contend with the emotional fall out of an abusive stepfather, and the suicide of her older brother. Much like the other characters, Alix sees The Quiet is a point of escape and from what we see of her time there, it is clear that Alix is not only fully aware of those who also frequent it, but of the politics that govern it.

Alix’s ability to reach the quiet via base jumping poses some interesting questions, firstly, how exactly do people get to The Quiet? Chances are that you have been asking this since issue one but I am the sort of human who is perfectly happy to take everything at face value and has never needed anymore explanation that some people have sort of magic orgasms that take them to a sort of magic time stop reality. Secondly, and potentially more important is the question of what exactly is The Quiet if it’s not just a place for people who have sort of magic orgasms to disappear into when experiencing the aforementioned magic orgasms? Up until this point The Quiet has been intrinsically linked with sex, now it is something more, something different.

If you had to place Sex Criminals onto a Venn diagram of laugh out loud hilarious and emotionally intelligent heart-breaker it would go straight in the middle and this is due in part to Matt Fraction’s smart script and witty dialogue. His handling of Alix’s past and her sexuality, for example, are both respectful and conscientious. Neither are ever played as the punch line and while it is inferred that she may have experimented with sex, there are no blurred lines concerning consent. Asexual people and asexuality are vastly unrepresented in popular media, and rarely discussed and the examination of it through Alix’s internal monologues is interesting and insightful but also extremely funny as she debates what is normal and whether or not there is something wrong with her against a backdrop of sex obsessed teenagers.

Providing an equally considered and nuanced understanding of the issues raised in #13 and responsible for bestowing upon readers a 20 panel, penis eye view of fellatio, is artist, and award winning humorist, Chip Zdarsky – who we totally see hiding in the background wearing a top hat like it’s not even a thing. Zdarsky’s choice of framing turns what is so often a tense or poignant moment in a character’s development into something that is not only less emotionally fraught but also funny and it is through this humor that we find the humanity. The highlights of this issue are the panels which show Alix’s revelation that there is nothing wrong with her as they mimic the soft edges and aurora looking colorscapes of The Quiet.

Well written, beautifully illustrated, funny, heart breaking, and sort of gross, issue #13 is everything you could possibly want, and with some interesting twists and intriguing new characters, issue #13 has definitely left me wanting more.