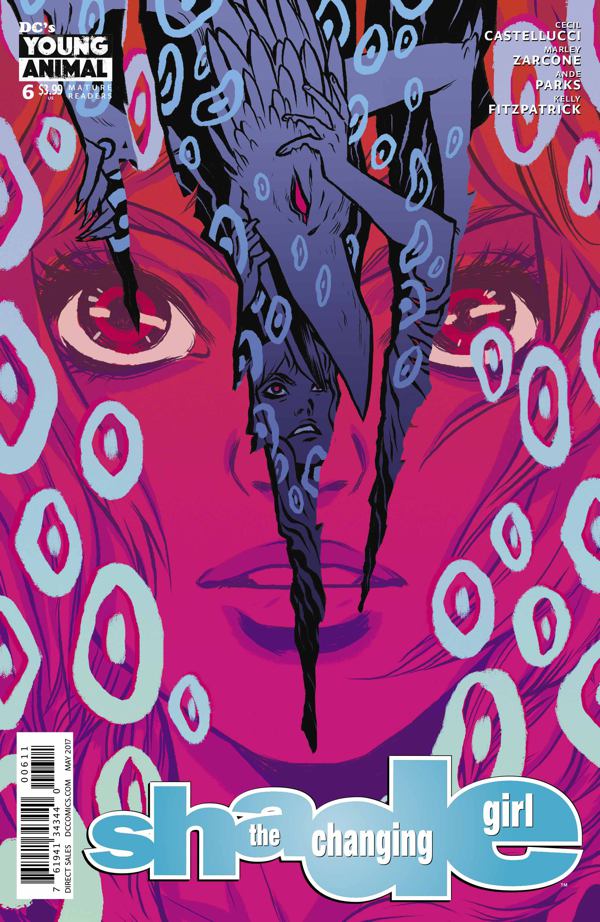 “One thing I’m learning is that you can’t outrun crazy. And this Megan bitch was crazy.” Shade, stuck on earth and now tormented by the past owner of her human body, tries to find a way to fend off the malicious spirit of Megan before she herself is kicked out in this insane issue of Shade the Changing Girl!

Castellucci gives me mixed feelings about what she does with this issue. I love her writing, it’s got nothing to do with how Castellucci writes, but what happens to Megan in the issue makes me feel a bit uncomfortable. Is Megan a terrible psychopath? Yes. Is she someone who shouldn’t be let into her body and given a way to terrorize the people around her? Yes. Will she go back to being brain dead if she goes back into her body? I guess, but it feels weird that her mind is so intact if that’s the case, really. It’s…still her body though. And I’d rather Shade in her body than Megan, but it is Megan’s body and Shade has basically stolen it. What they do with Megan here just makes me feel weird about the whole episode. It’s morally grey and everyone in the comic acts as if it’s a black and white, good and evil problem.

Zarcone, Parks, and Fitzpatrick deliver an acid trip that would terrify anyone. I love what they do with the haunting spirit of Megan. She is the madness that terrorizes all she seeks, especially Shade, challenging Shade’s very presence in the human world, and the visuals these three create from her are masterful. From the whirlwind of hands and hair in a psychedelic fade from pink to blue to the ocean of seeing eyes washing over Shade’s bedroom as people and objects float while she tries to combat Megan, there are scenes that feel like they could only have been made if this team was on shrooms. I love all of it.

Saida Temofonte’s lettering has been spectacular for Shade. The rainbow for Rac to the blue for Shade, I like that Temofonte adds uniqueness to the lettering by creating distinctions for important characters who have delved into the madness.