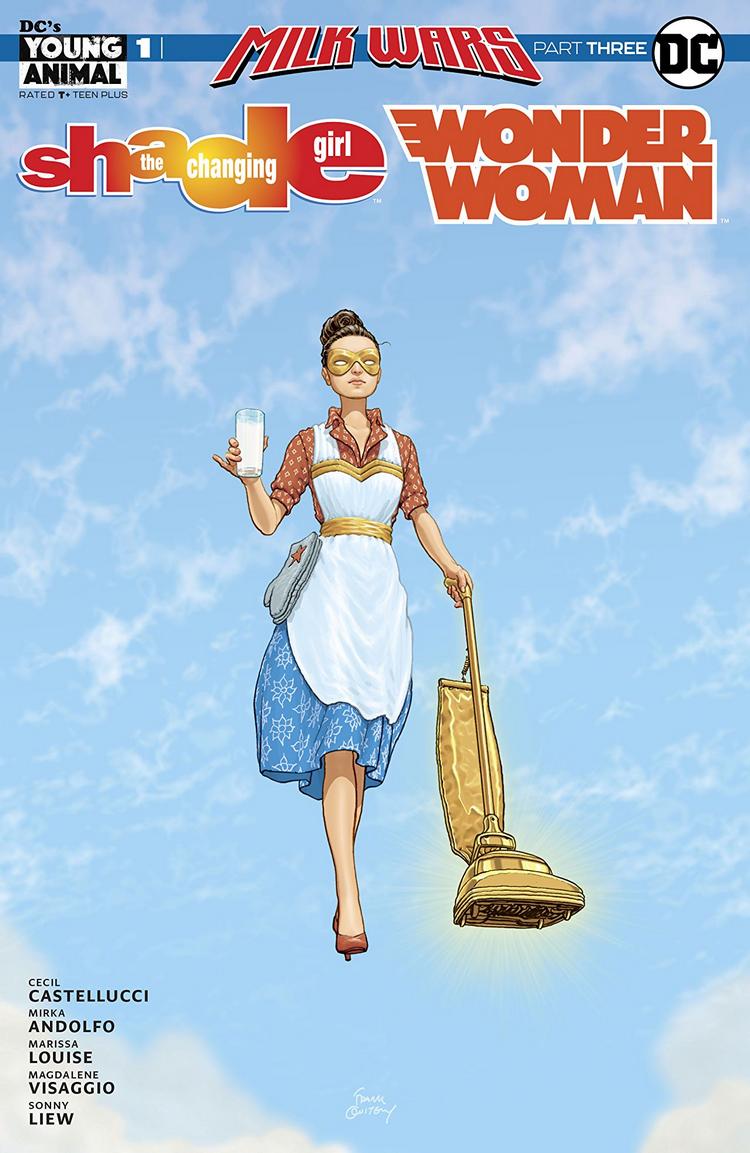 In the land of traditionalism and gender conforming roles, Wonder Wife reigns supreme, fighting alongside her Shade Force in order to enforce the “proper emotions at all times for all”! But is this truly the world they belong in? Find out in this exciting Shade the Changing Girl/Wonder Woman crossover issue!

“We’ve got a little girl who lost her kitten. A murderous wife. A first kiss. An attic full of spiders. A busy day for us heroes.” This, I feel, encapsulates some of the unhingedness of the comic. Castellucci knows how to write messed up bouts of psychedelic insanity. I’m familiar with what she does with Shade and I was expecting some strangeness, but this comic is on a completely different level compared to Shade. This comic hits the ground running when it comes to oddity, sprinting off a cliff almost immediately into a topsy-turvy madness of a distorted reality.

The satire of being trapped to feel what society wants you to feel as well as the heavy enforcement of the gender norms of traditionalist ideals is an intriguing concept through the refreshing dive into insanity that Castellucci takes you through, spiraling into a mania that gets more and more bizarre by the page. There’s this weird 1950s consumerism edge to the entire comic that goes hand in hand, in a way, with Shade’s obsession with Life with Honey, but in a clearly warped version of it that shapes the entire idea of the pseudo-reality.

The art in this comic is disturbing in the best way. There’s something messed up about the fact that all the babies are appliances. There’s also something messed up about the fact that Steve Trevor’s head, at one point, is just this giant milk carton. A lot of what is shown is this contorted, bizarro land of what everything ‘should’ be, but in a way in which whoever set up the reality clearly is not in the right headspace.

The coloring is perfect. Like any Shade the Changing Girl comic I’ve read, it’s filled with a vomit of psychedelic rainbow euphoria that entrenches each page, as if someone melted starbursts or skittles and used those for their palette. It works well with the madness that surrounds the absurdism of the comic.

If you like Shade the Changing Girl, you will like this crossover event. Heck, if you like anything under the Young Animal imprint, you’ll probably like this. It’s a strange creation and while I don’t know how someone signed off on this acid trip, it is well worth your time.