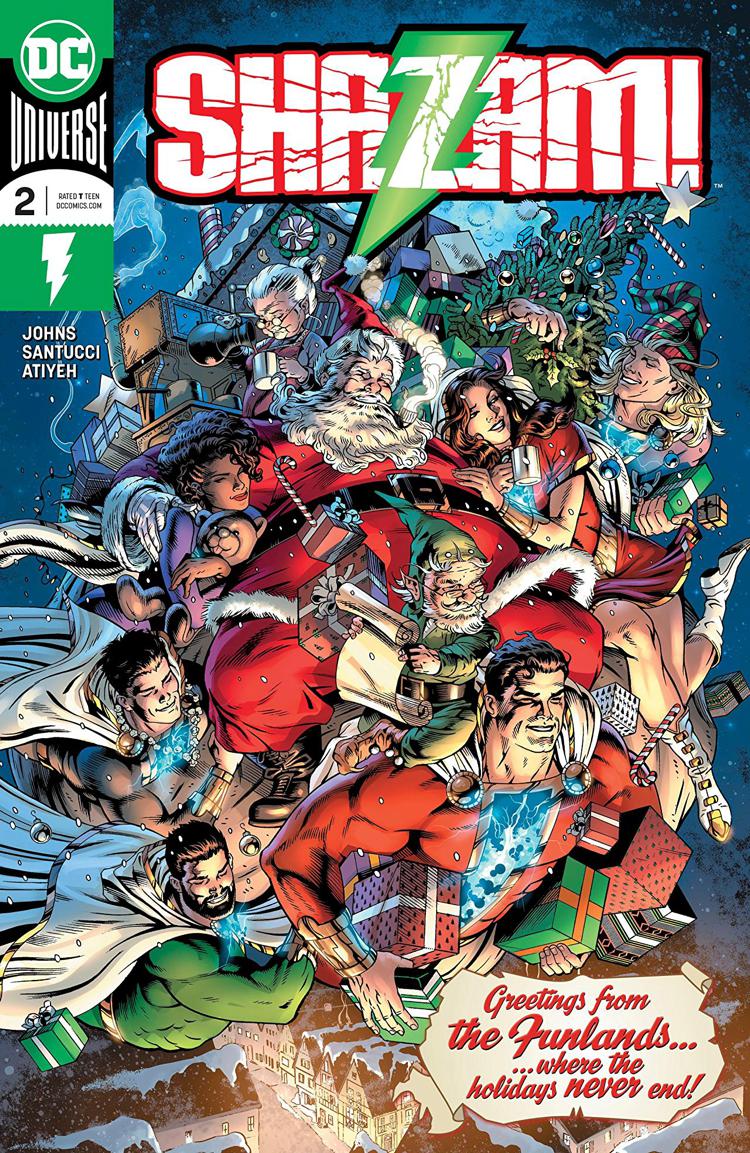 Packed with childlike wonder and excitement Shazam! #2 delivers all the same fun and youthful enthusiasm as the first issue.

This issue picks up right where we last left off with Billy’s alleged biological father showing up at the doorsteps of his adoptive parents Victor and Rosa. The two are shaken as expected and rightfully have quite a few questions and concerns to express to the adoption agency. After getting off the phone with the agency the couple then proceeds to head upstairs to speak with Billy while his “father” waits for them on the couch. This presents a problem as your family of heroes have gone to the Rock of Eternity and therefore seem to have gone missing or run off somewhere to the parents. Im very interested in seeing how Johns resolves this or handles this aspect of the issue because it gives him the opportunity to potentially let the Rosa and Victor in on the kids secret. I’m a firm believer that child superheroes lead a much less complicated life when they dont have to lie to their parents or guardians and sneak around. It would be interesting to see if Johns decides to let the parents know whats happening and getting their reaction to finding out that their kids are the superheroes who have been saving the city.

The issue then picks up with the kids still at the Rock of Eternity in front of the map of the Magiclands. The issue centers on the children attempting to figure out just where in the magic lands they want to go with the general consensus being The Funlands much to Darla’s trepidation. Throughout this portion of the issue, Geoff does a really good job of maintaining the children’s voices and personality and not letting their desires and wants to get lost in the background. He does a stunning job of maintaining their sense of wonder and curiosity which is only natural after having discovered a huge map of unknown lands in a magic train station that could take you just about anywhere. Described as “Disneyland on steroids” the Funlands is a setting and a concept that I’m really interested in seeing Johns explore because while its all fun and a kids greatest dream on the outside I have a feeling its a text book case of the old phrase “all that glitters aint gold”. Based of the end of the issue and the introduction of a character by the name of King Kid I have a feeling the Funlands hold quite a few surprises are have quite a bit instore for the Shazam family.

During the course of the issue Johns also reintroduces us to none other than the classic Captain Marv….Shazam villain, Dr. Sivana. I wont spoil too much about Sivana’s appearance but I will say that its my absolute favorite part of the issue. Because Johns uses it as an opportunity to not only introduce us to Sivana, but he also reintroduces us to another classic Shazam villain with a strikingly different and honestly more intersting backstory.

Artist Marco Santucci’s art pairs swimmingly with Geoff Johns story. Santucci does a swell job of conveying and illustrating the children’s wonder and excitement and he manages to maintain a sense of bright enthusiasm throughout the book. He does a fantastic job of crafting detailed panels and soaring set pieces that would honestly make for some beautiful shots in a film….hint hint.

Overall, Shazam! #2 continues Johns current run on the character and conintues to focus on the families sense of wonder and amazement at the sheer awesomeness of being freaking superheroes. Johns captures the beauty and the appeal of the characters and honestly with the film fastly approaching I think this would be a good starting point for those interested in learning a little bit about the character before it drops.