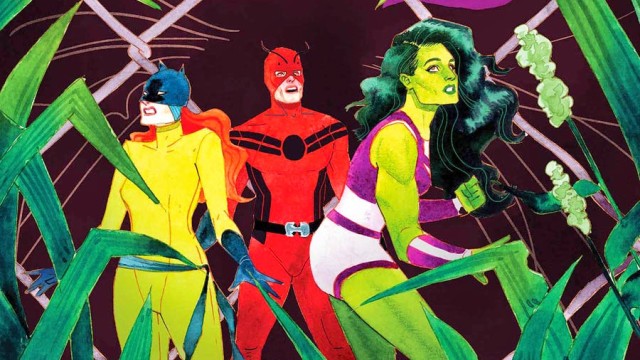 Anyone needing a standalone adventure to jump on board the Shulkie train, this is your issue. It has “Honey I Shrunk The Kids” hi jinx, mixed with basic background and personality spotlights on Ant-Man, Hellcat and She-Hulk.

Jennifer Walters has been asked to find a missing business partner who seems to want to do the right thing, by selling his potentially dangerous technology. Soule’s exposition of the case does a great job of leading the reader to create beliefs about this shrinking technology for sale. The fact that it helps to create some surprises toward the end is beneficial.

While previous issues have focused on Jen setting up her law practice and gaining clients, as well as sleuthing out the mysterious blue file, this issue deal with none of that. Also, just going to let people know, Jennifer’s aide — along with her assistant monkey — have taken this issue off.

Instead you have a one and done case, with a great cameo character who provides the comedic relief. Also explored is the relationship between Hellcat & She-Hulk. Tension is slowly being laced between the two as the super-powerless Patsy, a.k.a. Hellcat, feels once again she has to prove her worth to Jen.

On the flip side, Jennifer’s personality is slowly being developed throughout the series as the true friend who will trust her friends and their talents whine it counts. It’s a nice core theme to have above the previous incarnations that a few times placed her single gal woes above friendship.

Series regular, Javier Pulido, is back on art after two fill-in issues. There is a high contrast between text heavy and action heavy pages. Text heavy pages with single scenes sport identical panels with just a single variation that creates a quaint and humorous tone. From exposition to action pages, it’s clear Pulido has a great handle on space creating open spots so that Clayton Cowles has options and breath when lettering. It helps the whole piece to work with the image instead of having dialogue feel like it is being forced into the page.

The yard backdrop also feels like an actual yard enlarged instead of an unrecognizable jungle. Pulido’s clean lines and bright, gradient infused colors from Muntsa Vincente create the dynamic images many enjoyed from the first few issues.

While the one and done story telling style does not make this issue a must read for the series, it’s a good amount of fun. Plus the friendship development between Patsy and Jennifer cannot be underrated. Pulido and Soule also do a great job with the bookend story telling by opening up with a regal panel of Captain America, and juxtaposing that with a final panel that will have you wanting next month’s issue today.