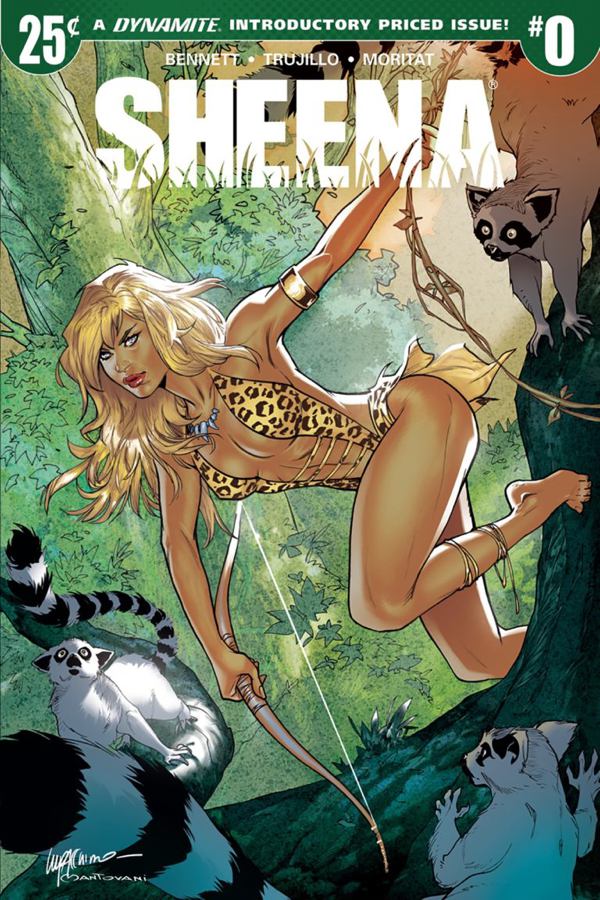 Dynamite’s refreshing character in the Swords of Sorrow crossover is having her own series relaunched. Drones and Sheena collide in this short opening.

A combination of inner monologue and Sheena talking to herself create the exposition necessary to bring new readers up to speed. Co-author Marguerite Bennett is known for laying character groundwork, first, and slow builds to the action and high stakes.

Often eluded to as a “female Tarzan,” Sheena has been around since 1937, as one of Will Eisner & Jerry Iger’s creations. Originally set in Africa, In 2007, Dynamite rebooted Sheena to take place in South America’s Amazon rainforest.

Artist Moritat draws on Incan influences for settings that Sheena dares, yet regrets, treading upon. His manga influences can be seen in occasional panels, but become the strongest on the final full page reveal, of who was watching Sheena on the other side of the drone.

There are lots of inconsistencies in Sheena’s facial details throughout the story. While not completely distracting, it will be off putting to some readers. The low cover price of this introductory issue is a bonus, however be prepared for a shorter story of only 15 pages, and the rest of the book packed with advertisements for other Dynamite books. While it was something I was used to, it was surprising to my comic novice husband, when I asked him to read through the book. He also pointed out a random butt shot panel that felt odd or out of place while he was reading.

Since I was familiar with Sheena’s background I might have gotten more out of the panels than my husband. After reading through the issue, he had no clue who the people in the background of one panel were, not picking up on the hints of the story.

Being set in the modern Amazon, it’s a world constantly shrinking, along with the rainforest, thanks to deforestation and technology. While this collision of worlds seems to be something that the creative team is about to tackle, it does make me wonder about problematic elements that could lie ahead. Do now, it makes me look forward to seeing what stories future issues will tell.

While there are some inconsistencies in the art, the overall details of the forest and temples were beautiful. It’s a simple, slow burner that isn’t a must read. It really is a wait and see as to how the rest of the series will play out. For only 25 cents, this is a zero issue that is well worth the cost.