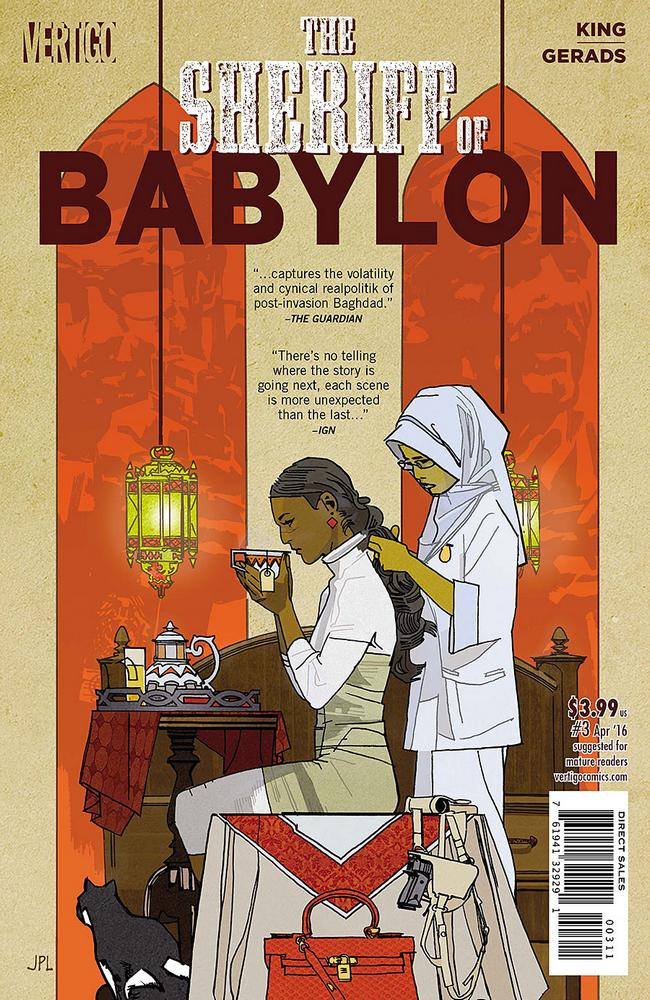 Christopher comes up against the harsh truth of being an authority in a land that’s not your own, as both Sofia and Nassir face challengers of their own. With the mystery behind Ali al Fahar’s murder no closer to being solved, the slaughter continues across 2004 Baghdad.

For someone who was so opposed to American action in Iraq (twice) and Afghanistan, I really can’t get enough of war stories about it. It’s not just Sheriff of Babylon, which takes place in the aftermath of Saddam Hussein’s capture and removal from power. It’s Zero Dark Thirty. It’s Homeland. Even American Sniper caught my attention in a somewhat disturbing way.

There’s something about the contemporary war story that just gets under my skin. It could be the same thing that made World War II stories so much a part of comics over a generation ago. There’s a curiosity about what these folklore heroes went through in the face of ultimate evil — that evil being sometimes the opposing enemy, and sometimes simply war itself.

But I’m not so sure that’s it here.

Part of being American (and not blind) is understanding that your country is not all one thing or another. It is not perfect in its judgment, nor is it absent in its justice. It is full of good people who are not necessarily decision-makers, and full of decisions that affect people across the globe. Abstract to most of us. Very real to those far away.

That’s what King and Gerads are capturing so slyly in Sheriff of Babylon — that essence of American perspective that is more like a smear of mud across a windshield. King positions at the center of this story a good man, who takes his responsibility to protect so seriously, it blinds him to the enormity of the situation surrounding him. He is in Iraq’s Green Zone to train a militia. In a land that doesn’t want him, maybe needs him, maybe doesn’t, and doesn’t have a choice but to live with death and violence every day.

And to the creative team’s credit, his motivation as a white knight, while unimpeachable enough to draw my affection for the character, does not change the reality of the narrative. He is powerless in a place where the power vacuum has already chosen its next set of victims. And this is only issue #3.

How Sofia navigates the Iraqi political scene is as delicate and agile as Nassir’s movements are heavy-handed and fearsome, but both of them come to similar circumstances with this chapter. Where King’s dialogue leaves off, Gerads’ narrative pacing picks up, with some astonishingly beautiful sequences peppering this third issue.

Every second seems carefully recorded and metered in details like Nassir’s big toe lifting off the bare floor or Sofia’s mascara brush drifting toward (or away from, I suppose) her closed eyelid. A car rolls in the street or a hair falls across a face and you can feel the moments extending. It’s nerve-wracking and intensely beautiful all at once. Even the ever so slight inference of the top of Christopher’s buttcheek as he pulls on his pants makes a moment that feels laden with weight. So much weight it could crush a good man underneath.

The texture Gerads applies to every scene, very slight and ever present, gives another layer to every moment as well — as if the dust of Baghdad is covering everything in a fine mist, clouding perception and perhaps even intentions. The entire story so far is predicated on a mystery no one wants solved but one man, so who exactly is the hero hero-ing for?

And it’s that set of complications that draws me in, here and elsewhere, far from tales of the Great War and righteous fight against Hitler’s troops in France. In a land where we sought to invade by telling ourselves we were protecting those who didn’t want protecting, no story is simple. No motivation clear cut. And Sheriff of Babylon is capturing that sense beautifully. King and Gerads weave a terrible tale. But it’s one I can’t look away from. It’s too rich and it’s too messy, even in its graphic depiction and graphic perfection.