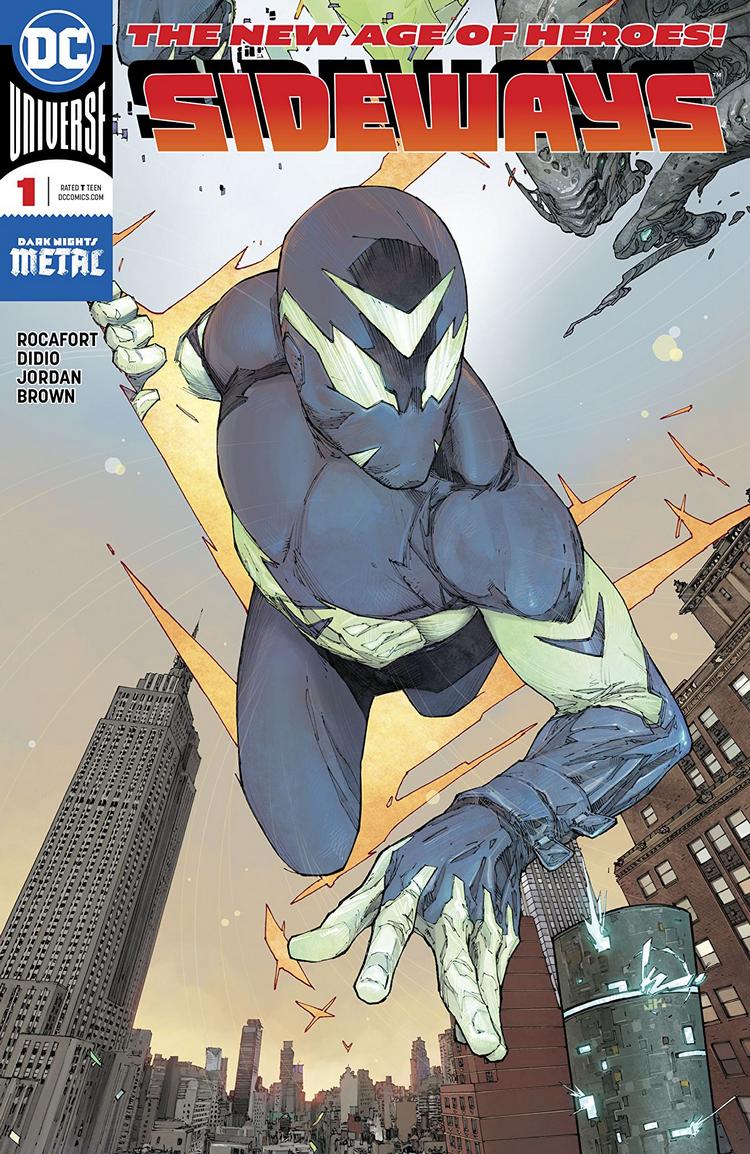 A new hero has emerged from DC’s Dark Nights: Metal event, ready to take on the world! Derek James begins to test his new abilities in this first issue of Sideways!

DiDio and Jordan write a character that I could grow to like eventually. He’s sympathetic to a degree, with almost obnoxious levels of jerks surrounding him at his school and no classes with the by far a better character and awesome best friend, Ernie. I kind of wish Ernie was the main character, to be honest. Her stuck together relationship with her sister has great banter chemistry and she has a unique style and edge to her. She has way more personality and flare than anything I’ve seen from Derek yet and I hope she’s featured heavily always.

While I can see myself liking Derek eventually, it’s hard to like a guy who thinks it’s ever okay to just pop into anyone’s bathroom unannounced. That’s really creepy and it’s hard to come back from being that guy. But I’m trying to give him the benefit of the doubt, since this is the first issue.

The art is beautiful. Rocafort creates detail, care about the little things. This can be seen especially in panels like the ones that are in Ernie’s room. The He-Man poster, the Master Chief helmet, the well organized yet sloppy array of washi tape, it’s all a great amalgamation of character that builds into who Ernie is. Her personality would not stand out as much if not for those small details.

The coloring is superb. Like the art in general, there’s great detail when it comes to the colors, whether it be Ernie’s blue-yellow-green onesie to the ominous sky in Gotham to the vibrant golds and teals matched with the more toned down dark blues of the mystery being that appears before Derek at the end of the comic.

Mangual puts effort into the lettering of this comic. The usage of text bubbles works very well throughout and I like that they pop up on the panels rather than the character just looking at their phone. I love the gray on green overlap for Derek’s thought bubble. While I’m not sure I get how that palette of colors works with Derek’s character, especially since his suit has none of them, I do like the colors Mangual chose.

I’d say give Sideways a chance. It’s a brand new character who’s just getting its bearings and I feel like it’s worth it to see what Derek can do.