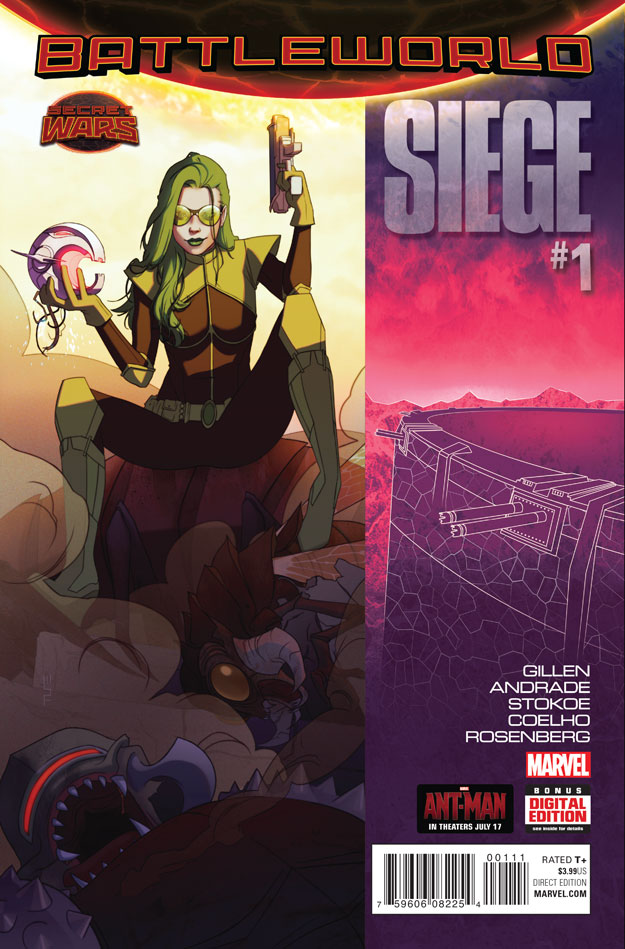 Siege #1 was described by its writer as “Nextwave, but a tragedy.” This is a pretty lofty goal to set for a book. Did it succeed?

The cop out answer is that it’s too early to tell. Gun to my head – almost. It lacks the manic weirdness of Nextwave, but the DNA is certainly there in the story. A bunch of Battleworld exiles (who are far from the MCU A-list) team up against a threat only they can handle. Abigail Brand, who is running the Shield, reads like Elsa Bloodstone with managerial skills – so a bit of Monica Rambeau in her too. There’s even a red-eyed robot man, only Major Summers is much more polite than Aaron Stack.

There’s a lot to love for folks who enjoy Kieron Gillen’s Marvel work, as he is once again following the adventures of Leah of Hel (Abigail’s sarcastic second in command), Lady Katherine of Bishop, and everybody’s favorite puncher of faces, Ms. America Chavez. That’s right, fellow AmeriKate shippers – we’ve set sail once again! For those of you who were bummed at her exile at the end of A-Force #1, this is your home now. Get comfortable.

While the characters already have a lot of chemistry, the stew is cooking slowly. This issue is 100 percent set up and backstory, which makes it a tad dull. On the plus side, it’s possible to read and enjoy without reading the main Secret Wars/Battleworld titles, if that task has been too daunting for you/your wallet. However, I’d be grateful if the pace picked up next issue.

While the set up is a bit dense, the art on the book is absolutely eye-ball popping. I’ve been desperately missing Filipe Andrade since he concluded his work on Captain Marvel; I’m a huge fan of his stylized, lanky proportions. His figures are cartoony but still incredibly expressive – it honestly reminds me of what Stuart Immonen did with Nextwave. It’s a style of drawing that sets you up for a non-standard superhero story, and it’s easily adaptable to large battles and private conversations.

Now, if you were a fan of Andrade on Captain Marvel, you might be a bit shocked to see a very different color palette in Siege. It’s much darker, and makes everything feel much heavier, like the characters are anchored to the ground. While this is very different from the sky-punching lightness of CM, it suits the foreboding tone of this story much better. Rachelle Rosenberg’s colors are rich, bold, and luxurious, like rolling around in a really nice plush carpet you stole from Prince’s house. The art treats don’t stop there; James Stokoe and Jorge Coelho both contribute absolutely bananas double-page spreads. It’s an interesting way to pull you into a flashback, and I hope it continues in the coming issues.

Zombies. Robots. Giant mutant ants. There’s a 20-day countdown to destruction, and it doesn’t seem like there’s any chance this will end well. That said, advance notice of doom doesn’t have to undercut your investment in a story, nor does it necessarily soften the blow. My hopes for this book are high. Maybe it’s the whole “Night’s Watch”/A Song of Ice and Fire vibe I get off the setting, but for my money there’s nothing more compelling than heroic misfits doomed to lose and fighting anyway.