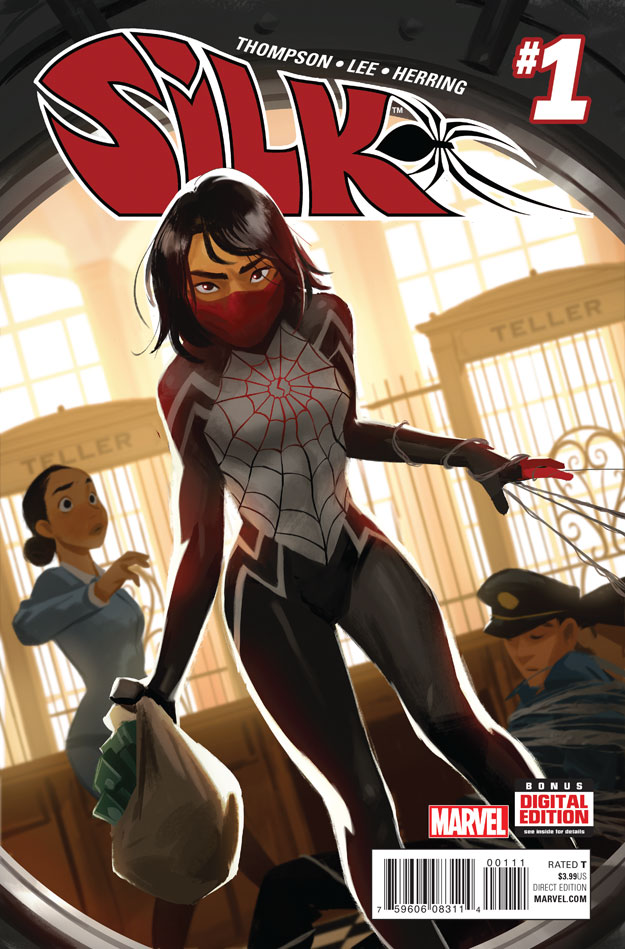 Swinging through the New York skyline, our pal Silk is back.

Cindy is busy fighting a small crew of Goblin Knights, ready to take them down to get what she needs. As a new onlooker watches the fight, Cindy takes them down and has a brief round with Mockingbird. When she’s not pursuing costumed escapades, Cindy has gotten a leg up at the Daily Bugle, finally finding a home to call her own. By the end of the issue, everything is definitely not as it seems and there’s a larger mystery to unfold in the life of our amazing Spider Cindy Moon.

While Secret Wars changed the status quo of the Marvel universe for a few months, we get to jump right back into the fold with Cindy in Silk #1. Some things have changed, while the mystery ever stays the same. This issue was a great reintroduction to Cindy and her New York adventures. There’s a slight gap between the end of the series pre-Secret Wars, but it’s not much to overcome. Silk #1 reminded me of when Cindy first got her solo series in the Marvel universe, so I think it’s a great jumping on point for new readers.

Robbie Thompson picks up where he left off, creating a sense of continuity for Cindy. There were some parts that caught me off guard, but by the end of the issue I knew that I was still reading one of my new favorite characters. Cindy is true to form, trying to balance many different roles and make sense of the time passed while she was in the bunker. Thompson demonstrates Cindy’s care for her family and her slight disconnect from the modern world, and important element of a character who was essentially lost to time for years.

The youthful and stylistic art in the issue was a great touch, courtesy of Stacey Lee and Ian Herring. Cindy may have been trapped in a bunker for years, but her lively enthusiasm did not fade away with time. The art conveys some of Cindy’s idealism while also capturing the more grave and serious aspects of her new world. I love the feel of the bright, vivid, and colorful art as it contrasts the sense of loss Cindy feels regarding her life in the bunker. She’s still a very youthful character, even if important parts of her world reflecting her sense of grieving and loss. Lee and Herring do a great job of conveying a unique feel for Cindy’s world that sets it apart from the rest of the Marvel line.

The Secret Invasion mention was such a wonderful touch. I like when there is a sense of continuity to major events, and heroes being kidnapped by shapeshifting aliens is definitely not something to be left to the annals of time. Mockingbird still has scars from her time as a Skrull captive, and I’m glad that this issue brought that to the forefront. Many heroes, including Bobbi and Jessica Drew, saw their lives change as a result of the Skrull plan, and it’s vital that such an event rears its ugly head in many ways.

Silk was a series I recommended to people before Secret Wars, and it remains as a series I think people should read. Not only do we have a new, diverse character within the pages of a Marvel comic, but it captures not only the adventure but the intrigue of a good comic series. Silk #1 showed that the series is definitely in for the long haul, and it’s one that people need to keep on their pull lists. I’m happy to see that many things are the same, but many things are also likely to change in the world of Cindy Moon.