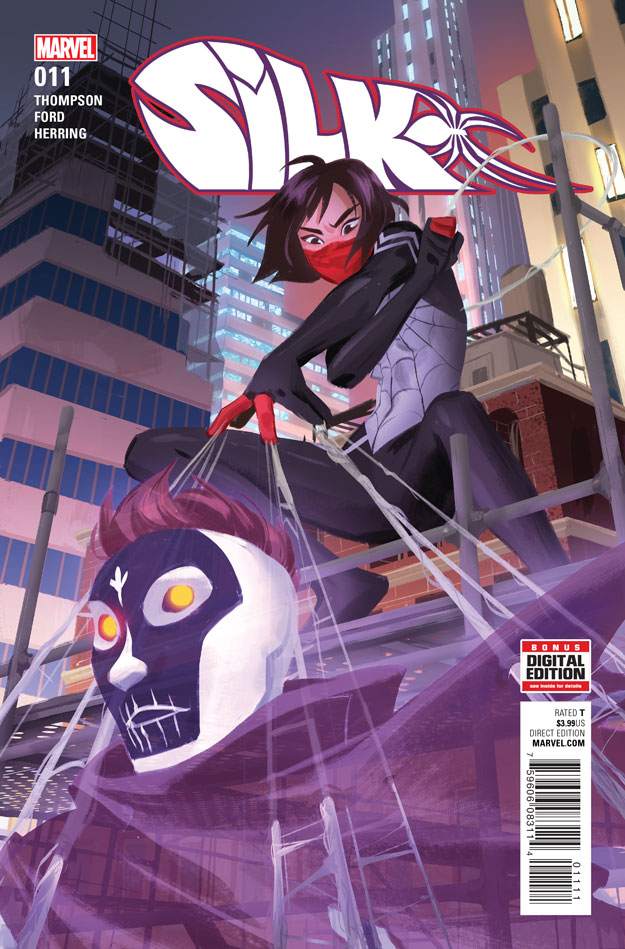 After several issues of strife with Black Cat and the emotional weight of searching for her family, Cindy Moon finally experiences an overwhelmingly positive chapter in her story. It’s surprising to see so many people here supporting Cindy: her ex-boyfriend, Hector; her coworkers, Lola and Rafferty; and Mockingbird, who doesn’t blame Cindy for the fallout with Black Cat. Cindy also has a supportive therapist, and Robbie Thompson divides up the issue by having Cindy share with her therapist about each encounter with her friends.

We’re introduced to more backstory between Cindy and Hector. They were each other’s first love, and it’s touching how quickly Cindy tries to hug him when she realizes it’s really him. Hector’s inclusion in the story is a testament to Thompson’s ability to play the long game: we met Hector in the debut issue of Silk‘s first volume. As a trauma victim, it’s crucial that Cindy processes significant people in her past. I’m glad that Thompson chose to have Hector and Albert, Cindy’s younger brother, be alive and present in Cindy’s life.

It can be terrifying knowing that friends have discovered your deepest secret. Lola and Rafferty know that Cindy is Silk, and their embrace of and even pride in her superhero identity is beautifully written. Tana Ford illustrates the three friends sitting on a rooftop, sharing this moment where they can finally be honest with each other. Ford injects her characters with personality in the details: Rafferty looks focused and no-nonsense, while Lola is relaxed in her facial expressions and body posture.

Ford and Ian Herring never take shortcuts. Every panel is rich in detail. Check out the cityscape when Cindy, Lola, and Rafferty go on a quick trip. When two shady characters are spying on Cindy, Herring captures the subtle green glow of video screens and shadows falling on a chalkboard. Ford and Herring deserve credit for making Silk a visual treat.

For the first time in two volumes of Silk, it truly feels like everything’s coming up Cindy. Silk will move you to tears, make you laugh, and hook you with intrigue, all in the same issue. Against a sea of grim and dystopian comics, Silk shines as a story of hope and friendship.