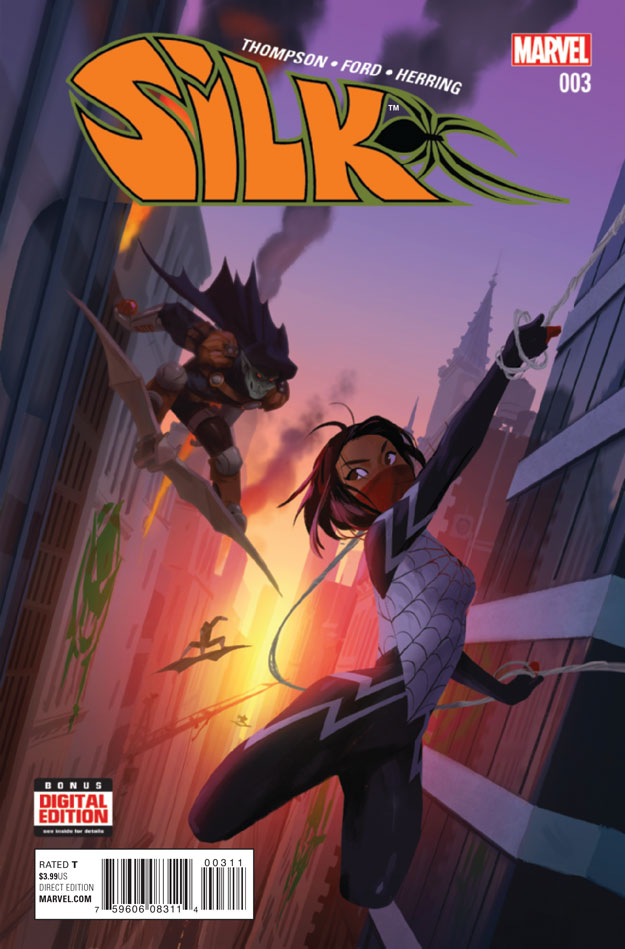 As Silk sinks deeper into the criminal underworld and moves closer to Goblin Nation the weight of the lives she has tried so hard to both maintain and keep entirely separate is beginning to show.

Although Robbie Thompson goes further with character development is this issue than we have seen previously, there are points where it seems like there is both too much and not enough space devoted to each of the three lives Cindy Moon is currently living. This leaves the story feeling disjointed and cold as readers jump between, Silk the hero, Silk the criminal, and Cindy Moon. Surprisingly it is the story surrounding Cindy Moon and her civilian life that I am currently finding most interesting. As Cindy Moon, she navigates friends, work, the brother with whom she has recently been reunited, and counselling.

In addition to her inner monologue which outlines her feelings on ‘interpersonal disagreements.’ the panels devoted to her counseling are the most interesting and affecting in the whole book and will most likely strike a nerve with anyone who has attended similar sessions. They give readers a deeper insight into the way Cindy feels and why while simultaneously conveying the frustration felt by someone conscious of a problem but unable to either fix or fight their way out of it.

Tana Ford, while a competent artist, does not bring the same depth to Cindy’s expressions or body language as previous artist, Stacey Lee. There are also some noticeable inconsistencies between panels and Cindy is all too frequently cut off at the knees. With colors from Ian Herring, Silk retains an element of realism, however when paired with Ford’s linework Herring’s sober palette seems heavy and muted.

Silk has been one of my favorite Marvel titles for a while there was something about issue #3 that failed to hit the mark. Neither the story nor the artwork succeeded in gripping me and getting through the issue felt like something of a slog. I truly hope that this is not indicative of what is still to come because up until this point, Silk really has been amongst the best.