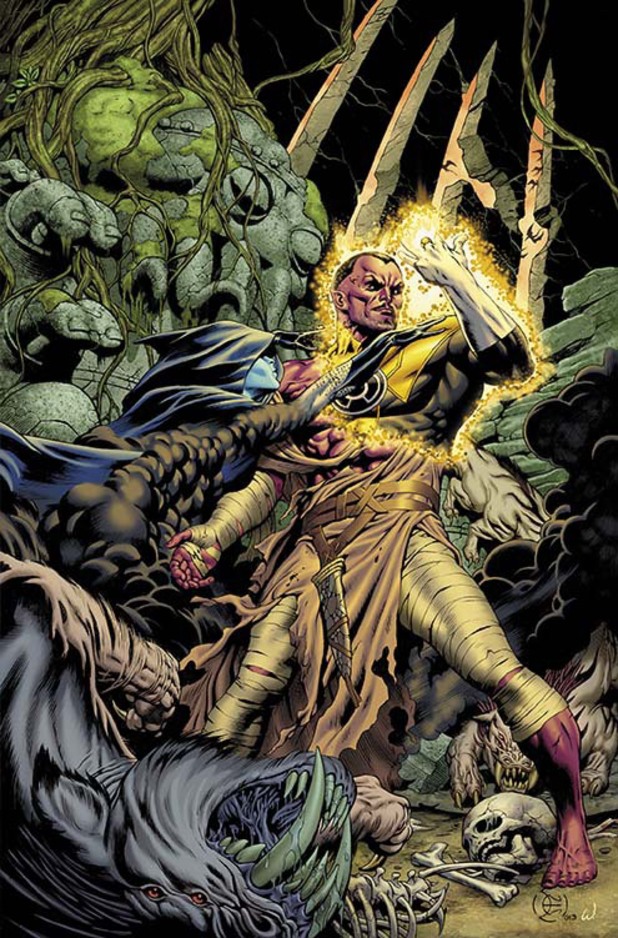 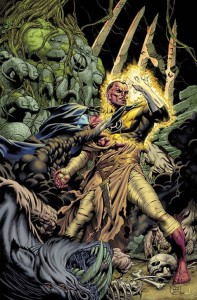 Sinestro is easily DC’s most anticipated and long-deserved new solo title this year, and the first issue is both a surprise and a familiar treat for longtime fans of the character. Cullen Bunn and Dale Eaglesham deliver a gorgeous pulp adventure tale against a backdrop of savage lands and untamed space. An unusual candidate for the role of Flash Gordon for sure, Sinestro presents a new set of rules by virtue of being a heroic villain instead of a traditional anti-hero, a lawful evil to Hal’s chaotic good. This title has the potential to be the gem of the Green Lantern line which, given how strong those titles have been the last year, is saying a lot.

(BEWARE MY SPOILERS) It’s clearly been a while since Sinestro rode off into the void, taking the Parallax entity (the living embodiment of fear) with him and leaving the Guardians dead. Sinestro no longer appears to be in possession of the Fear entity. So where did it go? Or, where did he put it? Bunn’s Sinestro has gone from crisp, regimented man-in-uniform to a feral recluse who is pretty much done with trying to force order on the universe. Lyssa Drak, the exposition-friendly “story vampire” from the original Sinestro Corps, gives the former Greatest Lantern of two Corps a familiar catalyst to stop wrestling space tigers and get back in the game: the survivors of Korugar, his recently-destroyed home planet. Bunn does a great job weaving a lot of emotional context and continuity into Sinestro’s internal struggle without overloading the reader. He seems a bit chattier than usual, but perhaps that’s just the isolation getting to him? Lyssa is a terrifying combination of bat-sh** crazy and evil-hot that should keep things interesting as well.

Most importantly, Bunn introduces a new story element that will definitely have ramifications across the other Lantern books: a new religion of scary anti-emotion fanatics called “The Paling.” Say what you will about the tenets of the Sinestro Corps, man, but at least it’s an ethos. On concept alone, this cult could prove a worthy successor to the Black Lanterns on the scale of GL baddie coolness (and the Black Lanterns were super cool). Bunn definitely nails his arrogance and absolute certitude, as well as his casual brutality – there’s a moment where he tosses a dude through a wall into the void of space without even looking that is very fundamentally Sinestro.

Eaglesham’s art shines under Jason Wright’s colors. Together they sell the pulp tone of the first act of the book and integrate it nicely into the second half, which is more space ships and less loincloth jungle fights. There’s a sexual energy in the way Eaglesham depicts “Sinestro the Barbarian.” A lot of the posing is very reminiscent of male bodybuilding pinups or Manowar album covers; we are treated to a straight up Sinestro butt-shot at one point (hooray for beefcake!). The uber-masculinity of it all feels a little out of place. Which leads to my one sincere complaint, and this may seem nitpicky to the casual reader but it is some realness to longtime Sinestro fans: Sinestro is drawn way too bulky. From inception to modern day, Sinestro has been depicted as a lean, lithe figure – part of why he’s been underestimated is that he is not physically imposing in the way that say, Kilowog is. He got crazy ripped when initially possessed by Parallax, but otherwise Sinestro doesn’t sport the traditional superhero build of Hal Jordan. Linebacker shoulders don’t quite suit him. In the future, it would be nice to see him slimmed down a bit (though the crazy egg-head can remain in the Silver Age). Even still, this issue is an improvement on Eaglesham’s previous Lantern work, which was a huge improvement on the Sinestro Villain’s Month book. It’s obvious Eaglesham is getting more comfortable with this corner of the DCU, and it’s very rewarding to watch his style evolve while simultaneously seeing Sinestro evolve under his pen.

This book may have a lot of hardcore fans anxious, but they should be happy with this issue because it’s a great start with a lot of promise. Bunn is a master of many genres – horror, westerns, superhero adventures, Viking stories – and has also been entrusted with the latest interpretation of another famous villain at the other big superhero company. He’s the best possible captain for this ship. It’s certainly a different side of Sinestro – less conqueror and more rescuer – but the story has started with the right balance of past and future to highlight what made Sinestro rise so high (in both the DCU and reader’s estimations) in the first place.