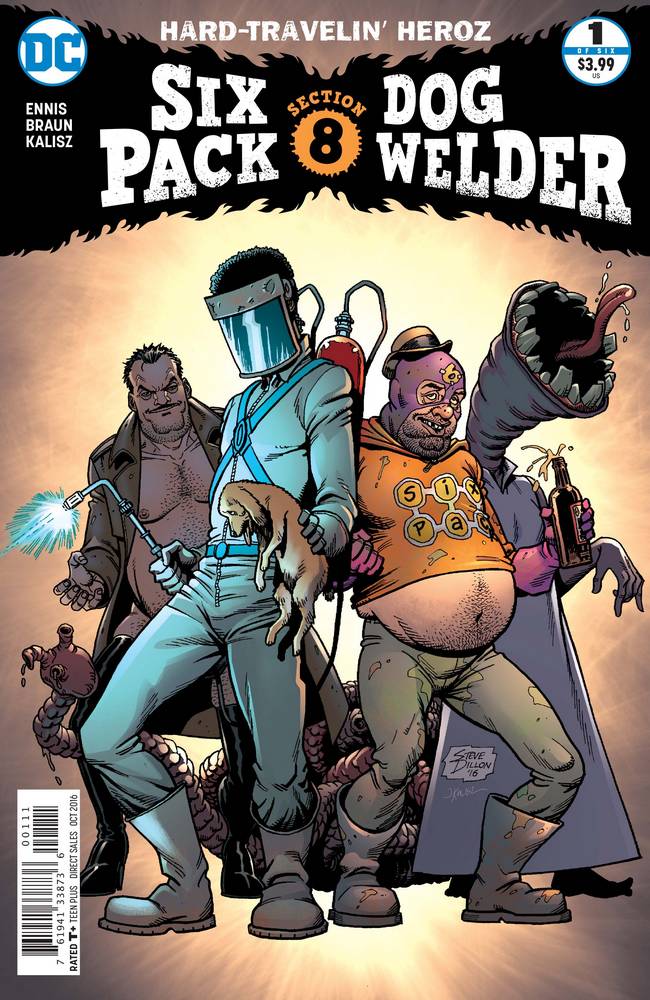 Inspired by Social Justice Warriors Green Lantern and Green Arrow, Sixpack attempts to round up Section Eight to make a name for themselves outside of Gotham!

A warning up front: This comic is gross. It’s offensive and weird and wonderful and hilarious and at times strangely poignant, but it’s gross. You won’t find pastel colors or relatable characters here, unless you relate to sentient piles of offal or the uncontrollable urge to weld dogs to peoples’ faces.

Sixpack & Dogwelder picks up where Ennis’s last DC work, All-Star Section Eight, left off. Section Eight is down to five members: Sixpack, a homeless alcoholic with dreams of leading a superhero team to rival the Justice League or the Teen Titans; Dogwelder, a mysterious silent man with a welding mask permanently attached to his face; Baytor, a demon whose main feature is a circular, tooty maw; Guts, a living digestive tract; and Bueno Excellente, a pervert with a two word vocabulary.

Inspired by the comic from which this book derives its name, Sixpack decides it’s time to stop wallowing in failure and find an adventure to help Section Eight attain the prestige that they deserve. Meanwhile, after a poignant scene observing some of his recovered victims, Dogwelder has a crisis of conscience. His reverie is interrupted when John Constantine dangles before him the possibility of an explanation for his strange canine superpower.

Not a lot happens in this issues, which is necessarily mostly setup, but the dialogue is fantastic and witty. Sixpack recaps Section Eight’s various misadventures, with only brief pauses to vomit, whilst Power Girl, Catwoman, and Starfire console a distraught Guts in the background. It’s an outre take on a lot of fan-favorite DC characters that manages to work pretty well in Ennis’s weird little corner of the DCU, and the ending promises a particularly exciting guest star in the second issue.

The humor in this comic is broad, and gross. It’s sophomoric toilet humor through-and-through. But it’s well-executed toilet humor that sharply jabs at the foibles of superhero comics, particularly DC’s comics of the last few years. I haven’t read a funnier Big Two comic in a while, and had to pause frequently to chuckle at some of its more on-the-nose gags. If nothing else, DC proves that they are tremendously good sports for publishing this comic.

The art is grotesque, in the best possible way. Braun renders every rotting tooth and speck of vomit with loving attention to detail. We spend most of the book looking at Six Pack’s stubbly chin and bloodshot eyes, Bueno Excellente’s hairy, garbage-littered torso and legs, and Baytor’s demonaic maw, and every panel of it is gorgeously awful. Kalisz’s colors effectively enhance this effect, from the queasy brown he uses for vomit to the ethereal green of the clouds that presage an astral visitor. It’s a tough book to look at, and it wouldn’t work any other way.

Six Pack And Dog Welder feels like the comic that the slacker kids in high school would make if they were supremely witty and had access to an incredible artist and colorist. It takes what should be broad, one-note characters and finds new angles and humor while also stealthily imbuing them humanity and poignancy. This is a book that will make you care about a man who welds dogs to peoples’ faces.