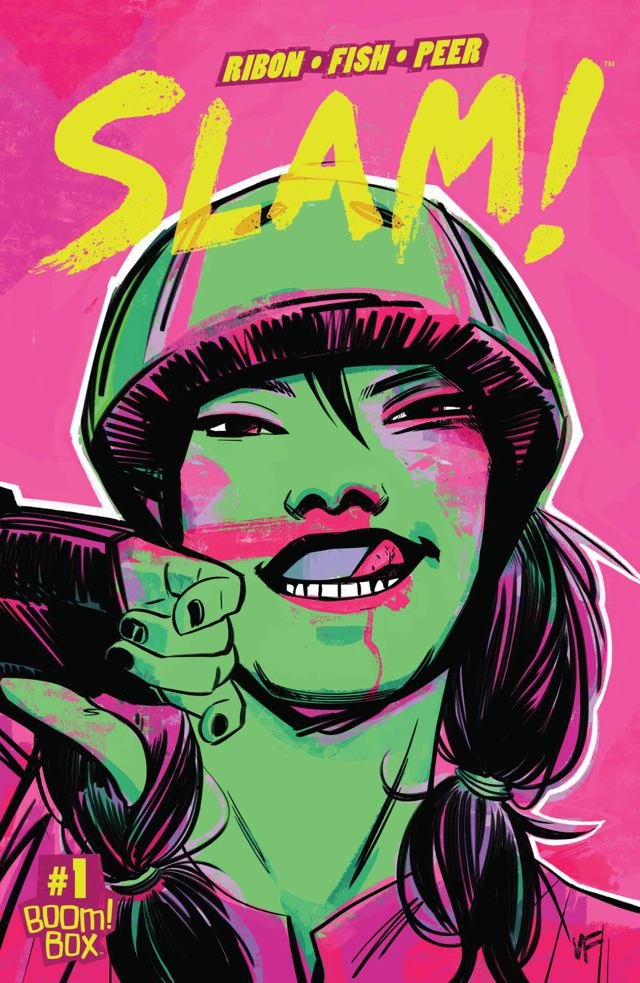 Lace up for Slam!, an utterly unique sports comic that’s just as much about trying to get you into roller derby as it is telling a story about it.

As a comic on its own, Slam! is modest in its ambitions and execution, telling a soft and downtempo slice of life story about one of the most aggressive and fast paced sports around. As far as sports comics in the American print market go, it’s not a complete surprise: Ringside uses pro wrestling as a focal point for a gritty crime drama and much the same could be said for Southern Bastards and its relationship to high school football. They aren’t so much about the sports (entertainment) as they are the lives caught in their orbit. There’s an argument to be made that comics like Ringside and Southern Bastards are written in the same mold as contemporary superhero comics: the costumes and the punchy bits are just anchors to organize the story that the creators really want to tell.

To get comics whose primary draw is the heat of the moment and the minutea of a sport itself, manga remains the only game in town as Slam! goes a completely different route. More than anything it’s about selling a lifestyle, which is a novel approach for a comic that makes a lot of sense for Boom Box as a brand. From Lumberjanes on, Boom Box has focused on making comics that prioritize shared ideals and experiences with the readership over power fantasies and escapist adventure, a spirit clearly on display in James Tynion IV and Rian Singh’s The Backstagers. Where Slam! parts ways with its predecessors is that it’s looking to the future instead of the past; gearing up for a recruitment drive rather than building from childhood nostalgia.

After the third page, all of the narration is in the second person: the viewpoint characters Maisie and Jennifer are your new best friend and crush respectively. Their first steps into roller derby are your first steps. Which is where the comic finds its focus. While there’s no major explainer of how roller derby works, Veronica Fish places the most emphasis in her artwork on achieving accuracy and verisimilitude, extending the sense of evangelism for the sport beyond the narration. In that regard, the comic comes off as being strangely dry and disconnected from the thrill of the action at times. It’s a far cry from the hyper kinetic feel of Motor Crush or the visceral impact of Southern Bastards. The one moment where Fish departs significantly from a direct representation is an illustration of Maisie as a fawn trying to get her balance on her skates for the first time, a brilliant addition that immediately calls Bambi to mind and is painfully accurate for anyone who’s been there. It’s the kind of whimsy that the series could use a lot more of and hopefully will as it develops.

Ironically, it’s the overall polish and cleanliness of Fish and colorist Brittany Peer’s work that works against the comic’s promise the most. There’s a very clear and intimate understanding of the game and the culture around it that suffuses the comic, but none of it is evoked in the illustration or design of the comic past the credits page. Fish’s brushy, anarchic strokes on the cover and the blocky, clashing colors under them are a pitch perfect evocation of the Riot Grrl roots of the roller derby revival, and the cut out, zine like aesthetic of the credits page is a further extension of that logic, but it disappears utterly as the comic gets underway. There’s flyers and other details in the panels themselves that bring it back, but it isn’t palpable in the construction of the comic itself the way that Annie Wu, Lee Loughridge, and Steve Wands approached the debut issue of Black Canary.

There’s still a great deal to recommend about Fish’s work, especially the subdued sensuality of her figures that never quite rises to eroticism but leaves the door open to it. Fish is clearly entranced by bodies in motion and the physicality of the sport and is as keen to share that with us as any other aspect. She’s just as dedicated to drawing attention to the curve and musculature of a derby player’s back as she wrestles on a sports bra as Peer is in building up the accompanying bruises. What the subdued tone and cleanliness of the artwork does bring out, if not the visceral aspect of the sport, is the intimacy that it forges and the unique perspective on women’s bodies that comes along with it.

Slam! offers one of the most unique perspectives on a gendered gaze in comics because of the subject matter and the fact that it’s a female driven production from top to bottom, with letterer Jim Campbell the only man involved in any stage of production. As a result, writer Pamela Ribon can leave the subtleties of interactions and evaluations open ended in interpretation knowing that the spirit will remain intact from editorial guidance through to final artwork. When Jennifer is scouted at the gym, drawing compliments about her thighs, it’s clearly about her potential power as a skater first, but carries a flirty undertone to it. Separated from the normative male gaze, Slam! opens up a rare opportunity to examine competition and intimacy between women that has nothing to do with male attention whatsoever, summed up in the final panel with Maisie and Jennifer falling asleep together while their cats fight on the floor. There’s actually no men with speaking roles in the comic whatsoever, which is another welcome treat.

Slam!’s debut issue is like a brand new pair of rollerskates: too polished and squeaky clean to be marked for greatness yet, but possessed of all the nuts and bolts needed for future glory.