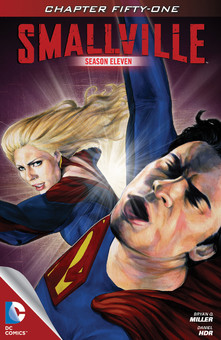 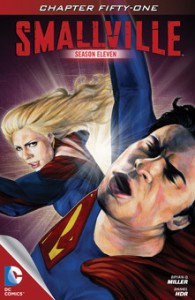 After the conclusion of “Valkyrie” last week, the 7th part of the 9-part main storyline “Argo” continues with Clark’s adventures in the future with his cousin Kara. The latest cover art by Cat Staggs is, like the majority of covers she has done, one of her best so far. The digital cover presents Supergirl punching her cousin Superman which brings back some memories from their first interactions on the television show and what Staggs continues to do majestically is make the characters look exactly like the actors, in this case, Laura Vandervoort and Tom Welling.

Since he came on board for “Argo”, artist Daniel HDR has been doing an excellent job with the artwork for this comic by keeping up the great work previous artists of the book has been doing. There are particular panels in this issue that fascinated me; for example on the second panel on page seven, you get to see more than ten Legion members and the Smallville adaption of their costumes. Most of them have the appearances that most likely feel identical to how they are done in other comics, which is something that fans of “Legion of Super-Heroes” would probably be able to judge better than me who has had little interactions with those comics. The good thing though is that the costumes still looks like something that the costume department of the TV show would have been able to do so while it does have a more comic book-y look, it still feels like something that you would have been able to see in an episode.

The dialogue in #51 was done so well, especially between the characters of Kara and Clark which felt like a “Smallville” conversation: a chat that you could hear between Welling and Vandervoort’s characters that includes their disagreement on certain approaches while having their classic super-fights that includes the destruction of several trees. It’s not a negative critique at all but this is something that was classic on Smallville which was having battles taking place out in the woods or a place that was close to trees. The relationship that was established between those two on our television screens continues to stays true in this digital series while still evolving as they still have these great learning-from-each-other-moments that is one of the strongest aspects of that relationship.

Looking at the events that take place in “Argo”; something that I as a reader appreciate with Miller’s writing is that it still feels like the TV show, just on a bigger scale since this comic doesn’t have to worry about a budget which was something that the later seasons of the show had to think about every year. The only thing that I would remark on due to how this chapter ended is that the story has a little faster pace but that is mostly because this episode has nine chapters instead of twelve and while that is not necessarily a negative thing, it’s just that you do feel a little difference when you are reading it.

Issue #51 was overall a fantastic chapter that continues the extended interactions that we as fans always enjoy to see between Clark and Kara in its new setting while exploring the 31st century and continuing to build up towards things to come.