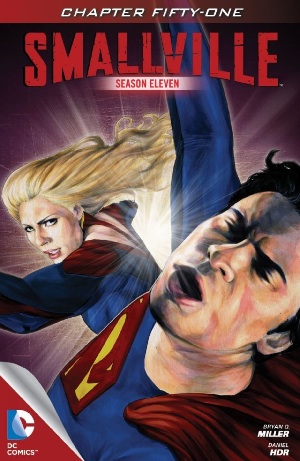 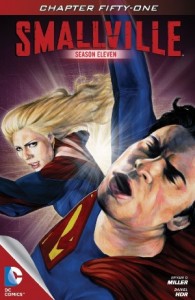 The penultimate chapter to the story “Argo” continues the adventures of Superman, Supergirl and the Legion of Super-Heroes as an old enemy from the past, Doomsday, is unleashed on the city and its citizens.

Issue #52 is most likely incredibly satisfying to a lot of the fans of the show that never got to see the first battle between the last son of Krypton and Doomsday be this big, when that character was the antagonist of the show’s eight year. With no budget to be concerned over, this issue is yet another example of the digital series’ potential — as readers can get the chance to see some great moments in beautiful artwork, that the show could never hope to give its viewers because of budget.

HDR drew some fantastic panels that featured the hero and the monster meeting again after such a long time that made this issue so strong. The way that Miller wrote Superman’s inner thoughts  — shared with other heroes through a telepathic link  — and included the fear that he felt the first time they fought, was great. This is one of Superman’s most dangerous foes in the comics, and continues to be in any media that Doomsday appears in. Out of any of the previous chapters, #52 was the one where I appreciated the coloring the most. Whenever you did see Doomsday on the show  — who was, in case you didn’t know, an actor in a very convincing suit — it was mostly in the dark, most frequently nighttime, and therefore you didn’t see him completely. This time, you see him attack in the middle of the day and the setting around the monster was in very brightly colored — quite a good choice by the artist.

The pages that featured several Legion members — once again great to see — up in space were some of the most superb artwork in this week’s issue. There was just something very appealing with the way HDR drew space. Miller continues to use several of the open doors that the television series left open, majestically. A previously buried Doomsday now in round two with the Man of Steel is appreciated, especially with exposition/flashbacks like the panel on page twelve that shows a heavy factor from the eighth season finale.

Issue #52 ended with an intriguing cliffhanger that will definitely lead into a very big final issue of “Argo.” Looking at the previous endings of the first three main chapters, as well as “Effigy” and “Valkyrie,” fans of Smallville Season 11 — myself included — should be prepared for a possibly gigantic ending.