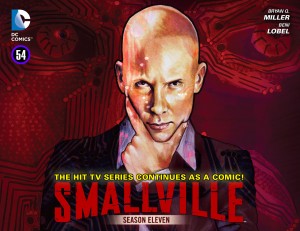 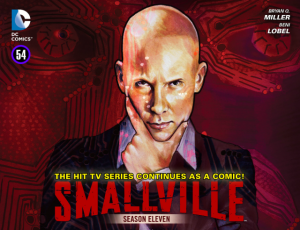 It’s time for the next side-story in the Smallville comic series, “Hollow”, which focuses on the Luthor siblings.

With respect to the digital cover by artist Cat Staggs, she has once again done a superb job. This cover features the best Lex Luthor yet, who looks exactly like Michael Rosenbaum and that is always something that I appreciate as a reader. Interior artist Beni Lobel’s work has a similar feeling to the style of David Finch, though he maintains his own look and feel throughout the arc.

As the story focuses more on Smallville‘s supporting characters, Tess Mercer in particular, the artwork for that character is appreciated as Lobel does an excellent job of making Tess look exactly like Cassidy Freeman. One of Lobel’s best panels is the one on page six in#54 that makes you feel emotional for Tess. These issues also feature the comic debuts of some familiar characters from the past (including one who has also entered the superhero business), which was fascinating to see.

Since “Guardian”, the character of Tess Mercer has had an interesting development and what this story presents is her dealing with the position that she has now: the complicated side of her which was always something that I admired. What Miller does here with Tess, despite the spot that she is in, is to make her just as human as she was on the show and that is inspiring when you look at what this character has gone through since she showed up in the eighth season. There is some compelling interaction between her and Emil Hamilton that presents the complexity of this character and how she is handling everything.

With the events that took place in the latest issue, it makes you wonder how it will tie in with the main-episode “Olympus” (which begins next week) but with the little hint that we got in #55, it’s safe to say that it will in one way or another. Overall, “Hollow” is off to a good start and it’s going to be interesting to see what Miller does with the Luthor siblings in this “Olympus”.