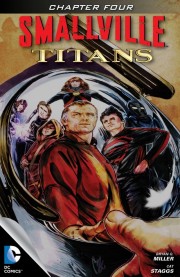 So far, Titans has been one of the strongest parallel stories of the Smallville digital series because of Miller’s writing and Staggs’s artwork. In previous reviews, there has always been a little concern that because of the limited chapters that the side-stories can have, would they be able to wrap up the big story in a satisfying way without being too fast? After reading issue #4, there was really no reason to be concerned to begin with.

It can’t be stressed enough what a joy it has been to follow Staggs’s artwork in this story and one of the things that she does so well is the action panels. One great example is on page 15 with Speedy shooting arrows multiple times. When they have a story with several superheroes, it’s always fun to see an artist’s take on their powers in their individual panels and this issue provides with a lot of great examples with splendid coloring. Because the story takes place during the night, the coloring has a smooth feeling to it whether it’s a power that lights up a certain panel or two.

After seeing her arc throughout this storyline, Miller did a better job this week in showing that Ravager was a great choice as the first villain for them to go up against. Out of all these issues, the final one really got to flesh out these characters a lot more and it kept up with the theme of “growth”. That theme is always something that should be part of a story circling around younger heroes and Miller incorporated that in just fine. There were good individual character moments in this issue, but the one that stood out the most was without doubt Superboy. Without slamming his writing for the other characters, his writing for Superboy was very compelling and felt like Superboy. The last two pages were the best part of this conclusion because it felt iconic and a little bit familiar to Conner and Clark’s final scene in the TV episode “Scion”.

For someone who was a big fan of the Young Justice animated show (that sadly ended way too early), one of the greatest aspects with Titans is seeing these two worlds that one has followed for a long time colliding into one perfect world. When Smallville the TV show was still on, there was never really a time when they could have featured an episode focused on young heroes instead of Clark (especially in the later seasons). But being able to see Miller’s combination with the Teen Titans made it into a fun and compelling story.

Titans had a nice conclusion and it definitely hinted that we may see these characters sooner rather than later because of how it ended and what is currently taking place in Alien. Without going into spoilers, it wouldn’t be a surprise if perhaps one or two of these characters actually pop up at some point during Alien. Despite that one wished that stories like Titans could perhaps be a bit longer, this was one of Miller’s best works so far and hopefully this element is something that will continue to expand throughout the Smallville continuity. 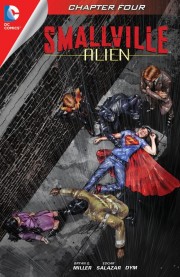 To begin with, we got another astonishing digital cover by Cat Staggs and just like her great job with all the Detective covers; it’s another powerful piece of art featuring Batman, Nightwing as well as other characters. Just like Salazar does in this issue, the glimpse that she gave of Gotham City on the cover fits with how one has always seen Gotham whether it’s in movies, TV shows or comic books.

Now this may be another unnecessary comment because it will most likely make sense as we get deeper into Alien, but this felt like a first issue of a new side-story. It’s almost a guarantee that they will connect this story with what is going on with the bigger one in Alien, but it would have been nice if there had been at least a little hint. It doesn’t make it clearer by showing that Chloe and Lois are going to Gotham; instead it comes off even more as a side-story which wouldn’t have been a bad thing if it was, in fact, a side-story. Other than that, there was really nothing to complain about in this particular issue.

Having read a few issues of Miller’s Gotham during his run on Batgirl, it was fascinating to see his Smallville take on Gotham City and along with Salazar’s fantastic art, they nailed it. This is how one has always seen Batman’s city in any form or media. A key element in Gotham’s image has always been dark buildings and a lot of rain which Salazar incorporated perfectly. To some, this may sound odd, but Gotham wouldn’t be Gotham without rain and a lot of grey/dark colors. Every building and structure, whether it was on the inside or outside, looked messy, dirty and in certain cases abandoned which is only good when it comes to drawing Gotham.

One didn’t expect to see Bane, one of Batman’s most essential villains, so soon in the Smallville continuity, but one is never opposed to seeing more DC characters being introduced. Salazar’s design for Bane was well done and it was nice to see a more classic Bane who didn’t look like The New 52’s version (although that design is also really good). One always enjoys a great fight between Bane and Batman, especially when they do a little nod or allusion to Knightfall. Other than seeing Bane’s introduction in general, there wasn’t really anything that stood out in terms of dialogues or how he was written, but it was still nice to see him being brought in.

Now it remains as a question whether or not Gary Oldman’s Gordon was an inspiration for Salazar when drawing his Gordon, but that may have been the case. It looks very close to Oldman, but that is only a good thing. While we didn’t get much of him in this issue, the dialogue that we got was 100% Gordon. It was definitely a nice to make a little nod to Superman’s costume that they introduced in The New 52’s Action Comics.

Issue #4 of Alien was overall entertaining and while it remains to be seen how this will come into play with what Superman’s current situation, Miller is continuing the great start that this story kicked off with. It will be interesting to see how Miller treats characters like Gordon and the interactions that we’ll most likely see between the Gotham characters and Lois and Chloe.