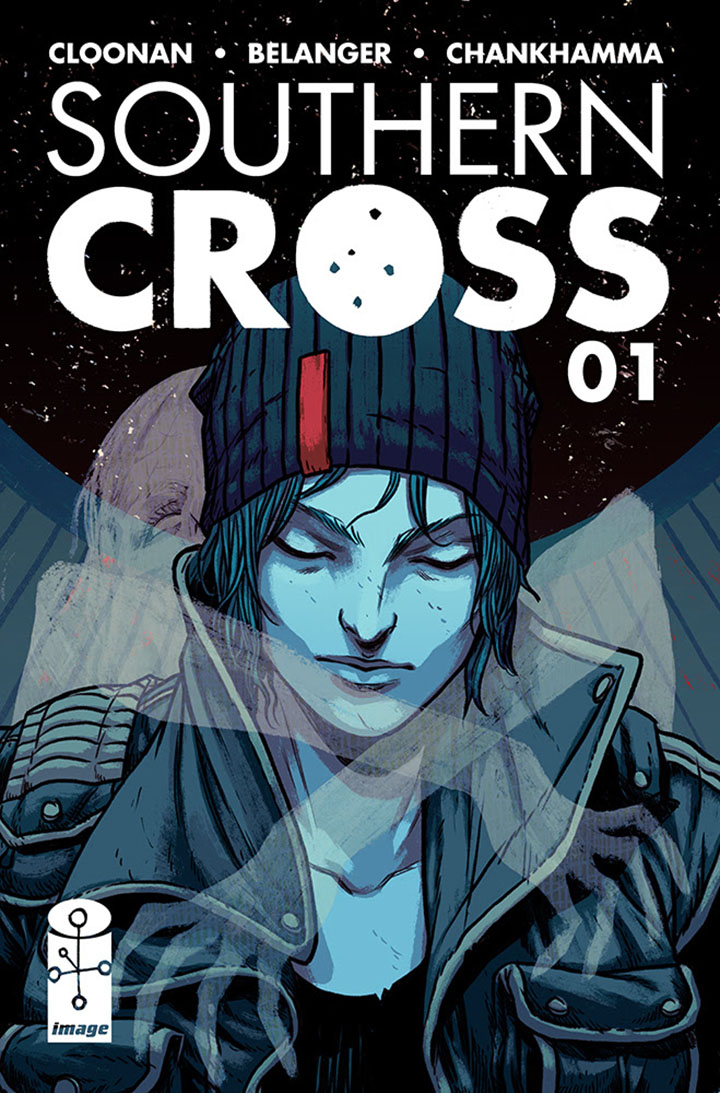 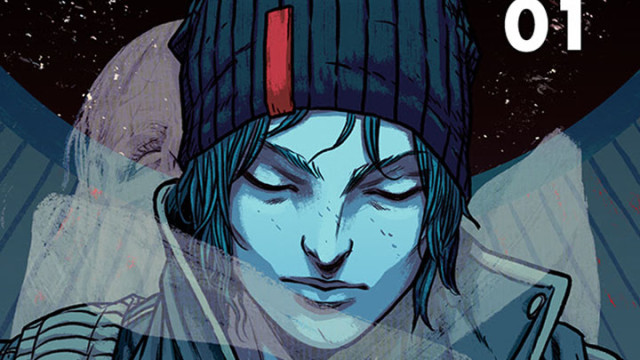 Southern Cross is a sci-fi/horror/thriller comic following Alex Braith on her six-day journey aboard an enormous space-freighter to collect her dead sister’s belongings from Titan. The name of this freighter? The Southern Cross, of course.

The art is a big draw for this book. The Southern Cross freighter, the entire mechanical world of the future is drawn to immense detail. On every page we are given exposed wires, metal piping, dangling cables. It’s crammed with lines and angles that really channel the sci-fi of the late 80s and early 90s.

While much of the recent futuristic projections often anticipate clean, curved, and bright lines, earlier decades envisioned a much edgier, slightly bent, maybe even a little bit broken future that hinged a lot on large, complicated machines—think about the difference between how I, Robot and Ex Machina see the future versus Blade Runner or Akira.

This comic in particular very much channeled Mobile Suit Gundam Wing and Outlaw Star for me, given the pipes-and-wires 80’s-to-90’s aesthetic that Andy Belanger seems to have going. However, even beyond the setting, I think a lot of that channeling comes from the character design.

Our main character, Alex, rocks a very 80s hairstyle beneath her hat. I’ll also quickly note that I very much appreciate how diverse the character designs and styles are. Even though Alex is very 80s, another character, Erin, has a very different sensibility. And so do the various characters who appear in crowded spaceports and mess halls. I’m more convinced of the reality of the world because there are so many qualitatively different people in it.

Also: there’s a noticeable emphasis on eyes and mouths across all the characters, which I think is what’s causing me to associate it with 80s and 90s sci-fi anime and manga. The style occasionally reminded me of Jake Wyatt’s, whose influences are certainly similar. I’ve no idea if Andy Belanger actually read a ton of manga or watched a lot of anime, but there’s definitely a lot about this older sci-fi style that pulls from my experience with those media.

Lee Loughridge only boosts this throwback-sci-fi effect with the color palette he’s selected. Southern Cross reads with a lot of the colors of early computing: heavy blues, greens, browns, and greys. Even when we stray from that range and move into yellows and pinks, it’s still quite muted, reinforcing the oppressive atmosphere that the team has created. Belanger also doubles down by making every line hard and firm. This is a solid, difficult place to exist and the artistic style and color appropriately reflects that.

Given how much I’ve talked about the ship thus far, you won’t be surprised when I mention that my two favorite pages from the issue were focused on them. One shows the Southern Cross bursting out of (warp?) and, consequently, nearly out of the page. We’re given a brief but engaging launch sequence at the top of the page, which then opens up to a gigantic ship coming directly at the reader.

The angle Belanger has chosen is really effective at conveying how massive this freighter is, while simultaneously giving the launch a sense of immediacy. The focus on eyes comes back on this page too, when we get a large panel featuring the launch reflected deep within a character’s pupil.

Conversely, my other favorite page, rather than being outside the ship and showing how big it is, instead depicts the engine room, the very core of the vessel. It’s gorgeous and the eye-theme returns a second time in an even more beautiful iteration than previous.

(Also, it might be the case that my brain was already in heavy-90s mode with Gundam and Outlaw Star going through my head, but I think Gambit makes a sort-of cameo in the background of that second page. Or maybe I just hope he did.)

Still, there were some points that were less successful, where the sequence of events or their significance wasn’t completely clear. I’m not sure whether to put this down to the art or the writing and I suspect it might be a little bit of both. There’s a scene in which a character, Erin, leaves the room and another character briefly appears and has an interchange with Alex—and very quickly, we’re right back with Erin and Alex in the room, together again.

I can only assume that Erin came back and time has passed, but there was no sense of that in the way that the interaction was drawn or written. I didn’t get an indication that either some time had passed or that Erin had returned, so it was rather jarring for her to suddenly appear on the page after she had been written as leaving.

I’m also unclear about what I’m supposed to take away from a certain scene in the washroom, or what I’m meant to make of a dripping faucet in another. For the washroom scene, I’ve read it a few times now, really trying to see what I’m meant to be picking up, and I’m still not sure. Alex looks in the mirror and seems dissatisfied, while swiping a card whose percentages I can only assume will have some significance later in the story. I don’t know why Alex is upset with herself anymore than I understand why the card is meant to be a big deal, though I got the sense that I should have.

There was also a particular writing detail that I noted between Erin and Alex. There’s a scene in which Erin asks Alex a question, which prompts Alex to launch into an internal monologue that provides backstory—before we cut to the next scene. I know it’s small, but I do think it was important to show Alex actually answering the question, if anything, to prevent the question from reading as a set-piece for more description. I can feel the writer working there, looking for a way to slip in exposition, and I want things to be a little more seamless. In general, Alex is rather cold to Erin and that was a nice opportunity to exploit that coldness without overwriting.

Very often, though, Cloonan does a good job of placing characters in situations that allow for exposition without the sense of the writer’s hand. The opening scene establishes the fundamental premise of the comic fairly effortlessly. It gives us the who, where, why, and how in a situation that it would be perfectly normal to explain those things verbally. You don’t notice good craft like that precisely because it’s that good.

Still, there were other points that felt too coincidental. The scenes and positioning themselves will lead to fluid explanation and plot progression, but the arrival at those scenes is a little more shaky. I’m specifically thinking of Alex’s convenient encounter with the ship’s captain, as well as the similarly convenient identity of her bunkmate. I’m willing to give some latitude to the latter point, as it could play out to be intentional, but it still read as just a bit too easy for my liking.

In general, the writing follows pretty familiar paths. Alex is the loner, the character who wants to keep to herself on this trip, and this manifests itself in pretty typical ways. I think this is the risk of doing more than a little monologue/voice-over, especially given the character type. Loners start to lose their edge when they talk about being loners and not wanting to have anything to do with other people. Alex’s bite comes across much more clearly and believably through her dialogue—though even that is, at times, a bit much.

There’s a point where she’s vocally rude to Erin that pushes her past loner and straight into unlikeable. It also irks me somewhat that we rarely see how Erin reacts to being treated this way. First, Alex doesn’t answer her question, as I mentioned earlier, and then, she’s openly hostile towards her. Even if Erin is a passive character who avoids confrontation, I should still see some kind of reaction from her.

We have a lot of set-up and a lot of introduction, but not much fresh ground. I’m not sure what’s either new or different about the world of Southern Cross that I haven’t seen in other hard sci-fi. Even though the book is being marketed as crossing into the horror and thriller genres, there’s isn’t a lot of indication that this is the direction we’re headed.

It may be that the last page in particular was nudging the readers in the horror direction but because we don’t know what’s possible or even probable in this world, it’s not clear whether this is artistic interpretation or a depiction of reality. I need a lot more of it to be certain that this is where we’re going. There’s also the set up of Alex’s sister’s death that could speak to the thriller aspect, but because we’re in the very, very early stages of the mystery, there are only fine threads of that thus far.

I’ve been thinking a lot about what makes a successful #1 after reading a ton of them in the past two weeks and finding myself a bit dissatisfied. First issues are hard. And first issues set in new worlds are even harder. You have to do a lot of heavy lifting, because you’re not only establishing character and plot, you also have to establish setting at the same time.

I’m looking for a reason to pick this comic to keep going with this story beyond the assumption that I’m going to get more in issues #2 and 3. Usually, I end up sticking with a good premise anyway, knowing that if I judge a comic based on its first issue, I’d probably never read anything. Still, with that mindset, it makes me think about what we allow in serialized storytelling that we don’t in other forms of media—which is another conversation for another time.

In the end, I think the best technique for a #1 is to almost immediately present what makes your story stand out—and I don’t think Southern Cross #1 did that very successfully. The art is uniquely beautiful and probably worth the price of the issue all its own, but the writing doesn’t quite hit the same heights. Of course we’re just beginning and it’s possible that this could blossom into an adventure unlike anything we’ve seen before, but this first installment hasn’t presented anything to indicate that.