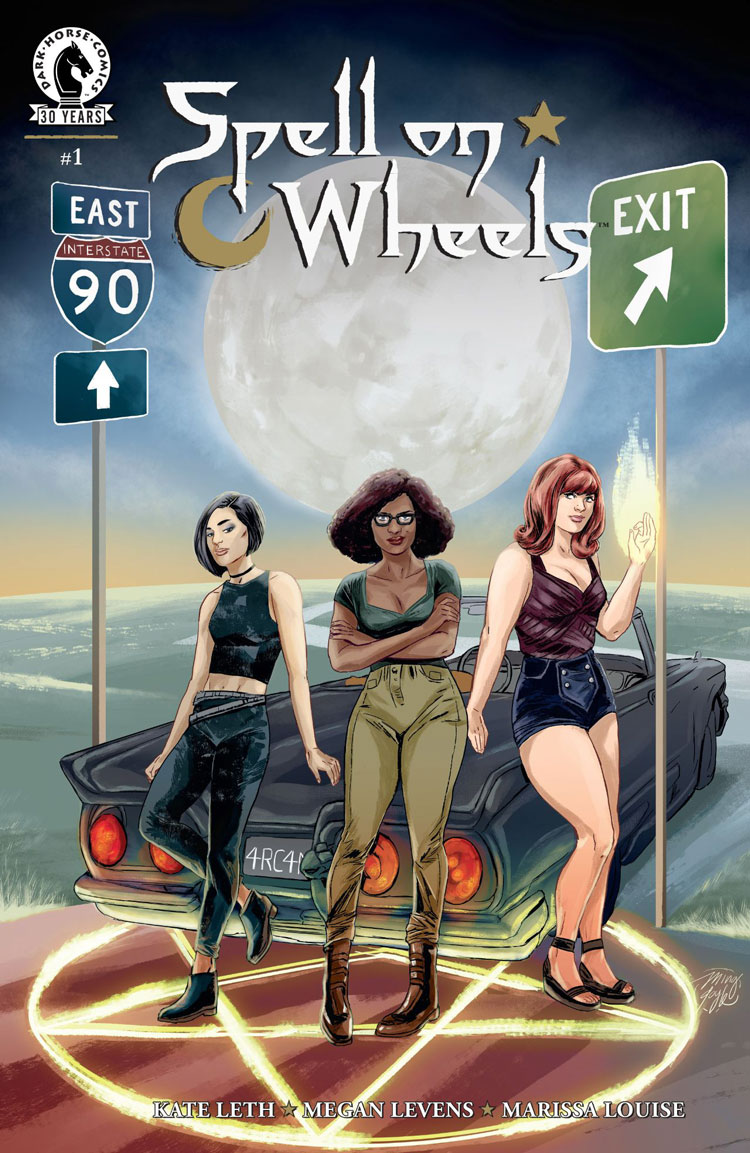 “It’s never good when the tower shows up, Andy, you know that.” Leth, Levens, and Louise bring to the table an exciting new series in Spell on Wheels.

Leth, as always, has delivered in terms of story. Picture Supernatural, except with three badass witches, less fridging, and a way more gripping beginning. The three main characters of this tale — Jolene Nguyen, Claire Bettany, and Andy Highsmith — are fantastically written.

My favorite of the three is probably Andy, the newest witch of the three who’s still learning about the craft and the world of magic. Though Andy is my favorite witch, I have to say that my favorite character is the scene chewing, obviously evil mysterious villain of the story. Each line of his oozes ham and it is magnificent.

The art by Levens coupled with the coloring by Louise makes this comic a joy to look at. Levens gives the witches well-detailed outfits every time they change, especially the ones that the women wear the next day as they start their road trip. The diversity in body types is very nice. The care Levens takes into drawing the hair of the characters is greatly appreciated as well.

It is oddly hard to find people who actually know what they’re doing with certain types hair in comics and she nails it. I really like her usage of phones throughout the issue as well. Louise’s choices in coloring, like making the tarot cards duller and more pastel shades or the use of yellows on the windows in the home, makes Levens’ art even better.

This trio shines the most during the splash page with the road trip car. The detailing on the car is intricate. Each line that the witches say when they react to the car demonstrates their personality.

The usage of shadows is masterful. I love that, even with the assaulting sense of the break in, the trio allow this piece of levity to flourish. It shows that this comic will have some darkness in it, but it won’t be all gritty. It will be a well-balanced hodge-podge of joking, epic witches, ridiculous villains, and a dash of dark.

I want to read the next issue of Spell on Wheels now. It was fun, it has a good touch of seriousness, and it has an interesting universe I’m excited to explore. The premise is just awesome! “Think of it like a road trip where we might have to fight demons!” Sign me up!