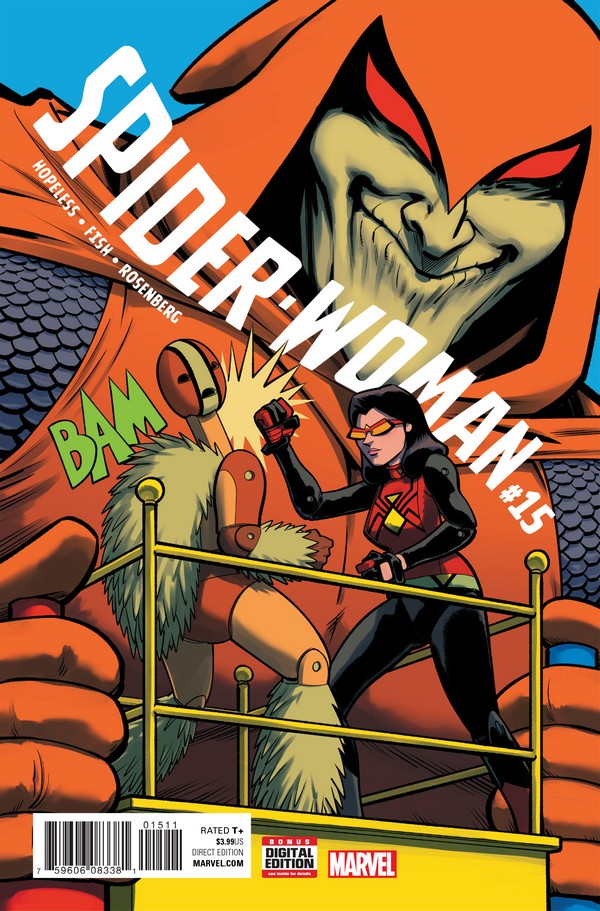 Jessica Drew has been through a lot recently: she’s adjusting to being a new mom, found out her good friend Bruce Banner was killed by her ex-boyfriend Clint Barton, and is at odds with her best friend, Carol Danvers. Now her other best friend Roger, aka The Porcupine, has been killed by a classic Spider villain, Hobgoblin. This issue jumps right into the action with Jess tracking down someone who’s taken Roger’s Porcupine costume.

We’re introduced to a new avenue for more prominent Marvel villains to profit off minor villains: villain identities as franchises, of which The Porcupine is one. We learn that Roger was paying franchise dues to Hobgoblin before switching sides and becoming a crime-fighter. It’s perplexing that Ben Urich, Jess’ confidant, knew about Hobgoblin’s franchising but never brought it up with Jess before. It can be hard for Marvel to keep the world of villains interesting and fresh, but Dennis Hopeless accomplishes it by introducing this element between Roger and Hobgoblin.

Jess’ relationship to the people in her life is fascinating. Unlike Cindy Moon and her friends, Lola and Rafferty, Jess opens up to Ben and Roger a lot. She never treats them like she’s their boss, like Carol Danvers does with her Alpha Flight teammates. Jess’ need for Ben and Roger mostly manifests as practical needs like research and babysitting, but the bond and interdependence she feels with them is undeniable.

Rachelle Rosenberg’s colors look fantastic, especially the teal backgrounds and Jess’ bright green venom blasts. The dark backgrounds — beautiful shades of teal, turquoise, and green — show Rosenberg’s range when compared with her other work, such as the bright tones of Mockingbird and Amazing X-Men.

Veronica Fish, whose Archie work I was amazed by, does masterful visual storytelling here. I love the body poses when Jess and a certain character have a heart-to-heart conversation. The character opposite Jess lounges with a comfortable posture, while Jess looks astounded. The entire issue flows effortlessly from panel to panel as Fish mixes fight scenes, explosions, and quiet moments.

Spider-Woman surprises and delights with unforgettable characters and believable tension. I’m emotionally invested in Jess’ commitment to the people she’s allowed into her life. Hopeless, Fish, and Rosenberg are creating a thoughtful and thoroughly enjoyable masterpiece.