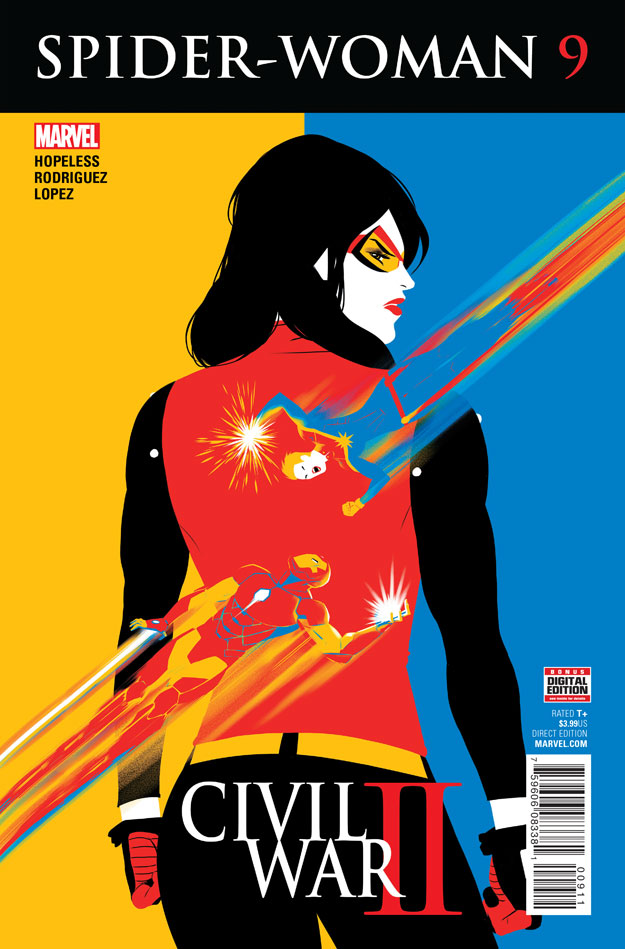 Are Canadians really that weird in comparison?

Jess just wants to get away from the new and tiring conflict in her superpowered community. Her endeavors to get rid of the numerous Wendigo threat however is interrupted by her BFF Carol, resolved to make Jess hear her out. Taking out the furry monsters is no big deal, but Carol enlists Jess for something that may be much bigger.

This story is basically a quarreling buddy comic meets black comedy. The Wendigo storyline seriously upsets my stomach, but I love to see any issue where Carol and Jess are together. These drastically different story elements don’t clash with each other and in some ways they reflect the different roles that Jess plays in her daily life. This time, she’s a superhuman crime solver, but she never stops being the spy, the detective, the mother, the hero, and, particularly for this issue, the friend. She may not be completely down with the new superhero conflict du jour, but her departure from Carol is not so much out of spite as protection for herself and her family.

It sucks to see Carol and Jess fighting, especially after everything they’ve supported each other through. However, I have a lot of respect for Jess opting to stay out the fight and recognizing the obvious pitfalls. Her avoidance and Carol’s persistence coalesce into a true moment of trust between the best pals. Carol wants to do right by the world and she trusts Jess to use a particular set of skills to make sure that she’s going down the right path.

Dennis Hopeless takes a dynamic between Carol and Jess that was decades in the making and reveals another side of it. In the first issues of this volume, Carol and Jess’ relationship is one of care and concern. In Spider-Woman #9, Hopeless reveals that best friends can be at odds. The entire superhero community is in a tenuous situation, driving the two friends to different sides. To see this played out in the middle of a fight with literally people-eating monsters without skipping a beat was awesome. Hopeless captured important dynamics of Jess and Carol that reflect their changes, their friendship, and their past without losing sight of the plot.

Javier Rodriguez creates a classic feel for this issue of Jess’ adventure with a modern twist on older styles. I admire Rodriguez’s use of multiple figures to showcase action and movement throughout the issue. Rodriguez is also on colors, moving from the idyllic landscape of a snowbound getaway to schemes that more closely match the tone of later panels. Alvaro Lopez on inks uses a soft distinction to mark the characters and the action around them. In some scenes, it feels as though the major points of focus have slightly thicker lines, not drowned out by the details and activity within the background.

Spider-Woman #9 is an important issue if you love Carol or Jess, if you’re caught up on Civil War II, and if you like a good comic that discusses the more heartbreaking parts of friendship. I was worried about the role Jess would play in the current crossover, and this installment gave me hopes about where she stands. The middle ground truly is a viable option, and Jess had taken her stake there despite knowing the potential effects on her relationship with Carol. With dark elements, action, and friends in conflict, this issue get a lot right about two of Marvel’s premiere heroes without being lost to the whims of an overarching comic event.