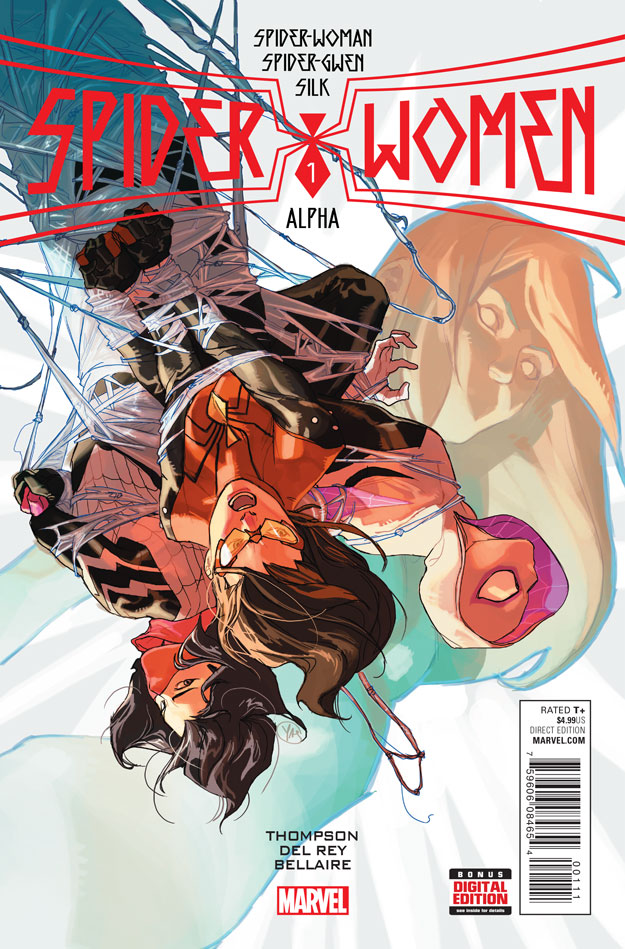 Gwen Stacy, Cindy Moon, and Jessica Drew take a break from their daily lives and traverse across dimensions to Earth-65 in search of brunch. Their outing is not so surprisingly interrupted when a familiar metallic face decides to crash the party. Their attention diverted, something of importance is taken from Gwen as another “familiar” face steps into the 616.

What a great introduction to a story of three Spiders. Jessica, Cindy, and Gwen all take center stage without special emphasis on one person or another. The mix of these women combined interesting stories and complications for each character that shine through most of the story. They each bring their own issues to the table that will provide an emotional background that drive the crossover.

Robbie Thompson, Dennis Hopeless, and Jason Latour have begun to spin the web of a story that will be rife with mystery, conflict, and emotional interpersonal dynamics. If this issue sets the tone for the rest of Spider-Women, readers are truly in for a treat. Thompson as writer for this inaugural installment works well with each of the Spiders’ personalities, synthesizing Gwen’s youth, Cindy’s regret, and Jessica’s maturity. The focus on each of their experiences in the first part of the story was a nice change of pace from the usual superhero crossover fare, and it felt a though Thompson took the time to understand why each of these women is friends with the others, but also what hides behind the veil of the costume.

Vanessa Del Rey’s has a great stylistic take on environment and action, though some of the figures and faces felt off. There are close up images where eyes are strangely drawn and some proportions seem odd throughout the issue. Yet, as with the battle with the Earth-65 Super Adaptoid, Del Rey’s talents are best showcased in imaginative angles, crowded spaces, and creative use of panels. Jordie Bellaire’s gritty colors bring out an earthy and grounded feeling within the story. Even the brighter images within Spider-Women Alpha #1 feel weighted by the emotions of the main characters, which is something I hope carries forward because it makes the story feel much more real.

Spider-Women Alpha #1 has a nice mix of everyday superheroes’ lives, mystery, and giant robots. If the first half of the issue was an ongoing, I’d read every installment. The interactions between each of the Spiders is wonderful and the story holds much potential, even before Spider powers come into play. There looks to be some great use of cross-dimensional elements, as well as some great surprises in store for the main characters of the crossover. If you want something that feels like a slight departure from the usual cape comic, especially if you love Jessica, Gwen, or Cindy, pick up Spider-Women Alpha #1.