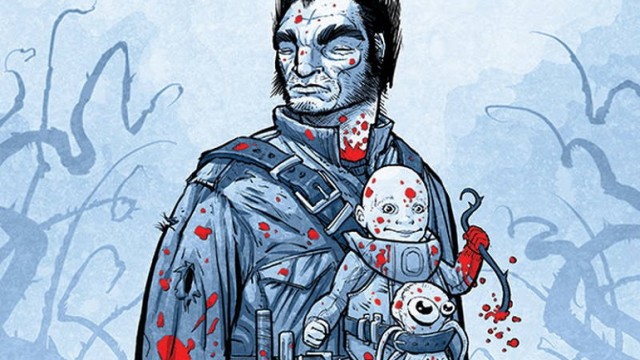 Spread is the new Image #1 that comes to us from the minds of Justin Jordan and Kyle Strahm. It’s a kinetic, blood soaked, post apocalyptic trip, that hooks you from the very first page.

As Dead Body Road ends, we are graced with a new Justin Jordan book. Justin Jordan broke onto the scene with Luther Strode a few years back and he has not slowed down since. Since Strode, he started writing for DC, giving him a steady income and the ability to explore some very interesting things at Image. He has always been great at finding excellent artists that compliment the story, from Tradd Moore to Matteo Scalera, and now Kyle Strahm.

“The Spread” is a giant blood-red organism that has been taking over all the land. It’s sort of like the alien creature from the John Carpenter film The Thing. It looks vile and disgusting and most definitely horrifying. It possesses the power to take over humans and transform them. For example it can turn your eyeballs into razor-sharp mouths that shoot out like tentacles. There are also “flyers” and “runners,” which are versions of The Spread that can leave the main host and deal horrific damage on land or air. Apart from that we still don’t know much about The Spread but it’s certainly an interesting catalyst for the end of the world.

Our protagonist is “No.” He is immune to The Spread. He is a very tough guy who can handle his own against The Spread. He is instantly sympathetic as the issue starts with the loss of a friend who was incredibly close to him. We follow him as he deals with various incarnations of The Spread, as well as what you might expect from any post-apocalyptic story, raiders. The hook of the story, as you can see from the cover, is that No finds a baby. Where does this baby come from? Why is this baby so important? Read the issue and find out.

Justin Jordan does everything right plotting this first issue. He introduces us to The Spread in a way that doesn’t feel like an info dump. We are brought right into the action. We understand the motivations of the protagonist No. We see the depths humanity has sunk to with the raiders. The classic idea that man is the greatest enemy to ones survival, not the actual monster, is implemented here. On dialogue, Justin is just as strong. By most standards it’s a pretty sparse issue but it’s certainly not devoid of power. No rarely speaks but when he does speak it means something. Most of the dialogue in this issue is said by the raiders because that’s what raiders do. They’re degenerates who babble on, hoping to instill fear in those they want to eat or defile. Justin smartly uses that contrast of No rarely speaking and the others speaking frequently, to display the quite confidence and/or mournful silence of No’s character.

I really like the art by Kyle Strahm, which is colored by Felipe Sobreiro. Like I said in the opening, this book feels super kinetic. That’s because Strahm’s thin line and his portrayal of motion and action. Arrows wiz by. Axes swiftly cut into throats. At one point No punches a dude’s face into mashed potatoes, and if you blink you might miss it. He really dedicates a lot of thought into the action. If you like gross stuff, like giant masses of blood flesh covered in tiny mouths, with spikes and tentacles on it, you’re in luck because there’s a lot of that. He draws it in a way that personally made me disgusted and horrified, which was the intended goal, because f*** The Spread.

This is a #1 that grabs you and doesn’t let go until you’ve seen everything on these pages. Fans of Justin Jordan jump on board. Fans of horror/post-apocalyptic tales jump on board. If you don’t The Spread just might get you….sorry, I had to.