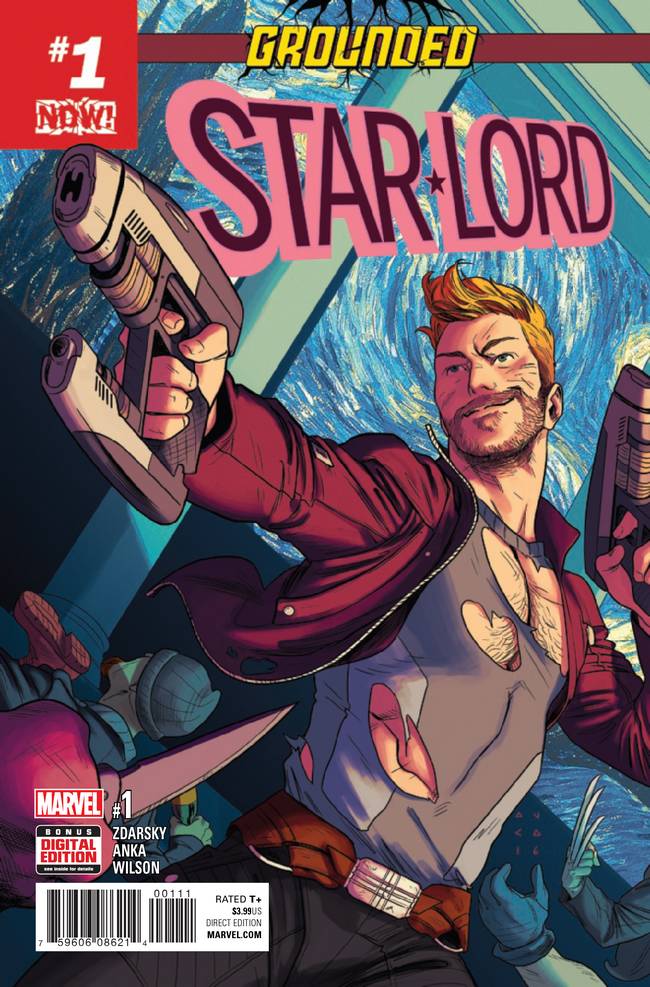 Spinning out of the “Grounded” story in Guardians of the Galaxy (which itself is a direct result of Civil War II), Star-Lord #1 gives Peter Quill a new regular spot for his adventures without his longtime teammates lingering around. Writer Chip Zdarsky pounces on the stranger in a strange land concept and juxtaposes Quill with various other displaced individuals, including Agent Abigail Brand, Howard the Duck, and even “Old Man” Logan.

Most of those encounters are played for humor. Around and through them, however, Zdarsky is able to bring readers up to speed (for the most part) on who Peter Quill is, how he came to be on Earth, and what threats might be following him. Zdarsky also throws in a bunch of censor-friendly swearing and #@$%*&$ and plenty of beer-drinking. After all, what else is a land-locked would-be spacefaring adventurer do?

There’s no significant threat present in the pages of Star-Lord #1 beyond a bar brawl, which gives artist Kris Anka ample opportunity to draw an ab-tastic Star-Lord lounging around, punching folks, getting his shirt ripped, having a conversation with Jordan D. White (who is also one of the editors on this comic), and making all sorts of wildly, comic-book-dictated-animated expressions. The focus in Star-Lord #1 is completely on Peter Quill and his would-be supporting cast, as most of the set pieces are typical and standard issue. Vincent van Gogh’s Starry Night is present in the issue, but the museum around it is a vehicle for the story, instead of a true-to-life rendering. Anka packs in details to set scenes and describe the environments, but never do those details threaten the figures in the panels.

Matthew Wilson colors Star-Lord #1, using a warm, but earthtone-based palette. The colors remain grounded, like Peter Quill, but still have the real estate to help define the story. It’s a remarkably different palette than Wilson uses on The Mighty Thor, but no less dynamic, descriptive, or potent. Anka’s simpler lines and Wilson’s ability to sculpt color match up nicely. Cory Petit adds the lettering sheen to Star-Lord #1, with the aforementioned swearing, some standard issue sound effects, and tightly connected word balloons. After the first page, the caption boxes go on hiatus, and Petit is able to relay everything in Zdarsky’s script quite nicely.

I hate to be negative, but Star-Lord #1 launching this week alongside Gamora #1 (with Rocket Raccoon #1 coming next week) has me thinking this might be a finite adventure disguised as an ongoing. After all, we’re six months away from the second Guardians of the Galaxy feature film, which would be a perfect time to launch a series reuniting everyone’s favorite misfit losers in space, right? We’ll have to see what happens together, but for now, Zdarsky, Anka, Wilson, and Petit are doing a fine job providing interstitial entertainment with Peter Quill in the spotlight.