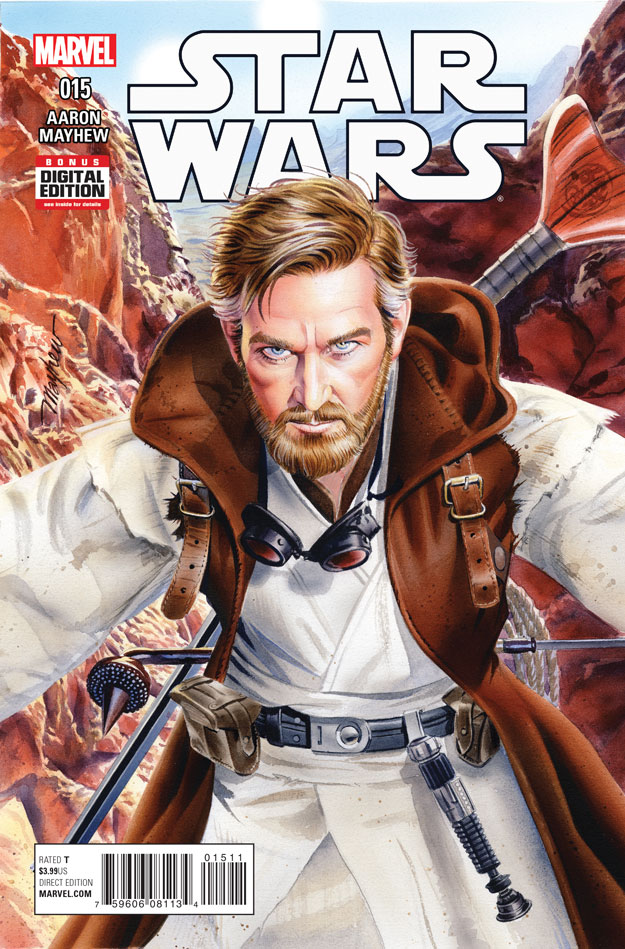 That crazy old hermit, wandering around the desert, stirring s*** up.

Jason Aaron is unstoppable with his Star Wars work. Dialing the time machine back with this issue, he transitions the series from Vader Down to a time when Luke was a little kid and Obi-Wan was just chilling in the desert, making sure the kid didn’t get hurt. Obi-Wan’s protective instincts are cute, there’s no other word for it, and I loved how Jason Aaron made Old Ben act like a secret Grandpa to Luke. As a kid, I wondered about what Ben was doing before Episode IV…and it’s exactly what I thought…and that’s just awesome.

Everyone knows Obi-Wan Kenobi, General of the Clone Wars and accomplished Jedi Master, wouldn’t be able to just sit around in his hut and watch the sand go by, and Aaron shows that nicely. He captures Ben’s personality perfectly, with his speech being the perfect blend of Alec Guinness and Ewan McGregor. I could hear Obi-Wan from these pages, which is what Aaron has done better than anything with his Star Wars writing. He captures characters brilliantly, and he gives them the space to really own stories. This story doesn’t have any Star Wars Universe shattering information in it, but I was completely engrossed. A week in the life of Obi-Wan, when told this well, is just as interesting as a crazy space battle, and that’s the effect of having a skilled writer working with an excellent character.

Mike Mayhew captures Obi-Wan equally as well as Jason Aaron, giving the character the right amount of wisdom, combat skills and mischievous nature. Mayhew’s pencils are very detailed, and his sharp work is consistent throughout the entire issue, including his colour work. The visual tone of his work is light at all the right points and he shows a great side of Obi-Wan throughout this comic. Mayhew is no stranger to Star Wars and it shows with his work in this issue, which is just excellent.

Star Wars #15 changes the pace without breaking the streak of amazing comics by Jason Aaron. Mike Mayhew joins him for the ride this time and delivers some great work, making Star Wars #15 another winner. You can’t miss with Star Wars.