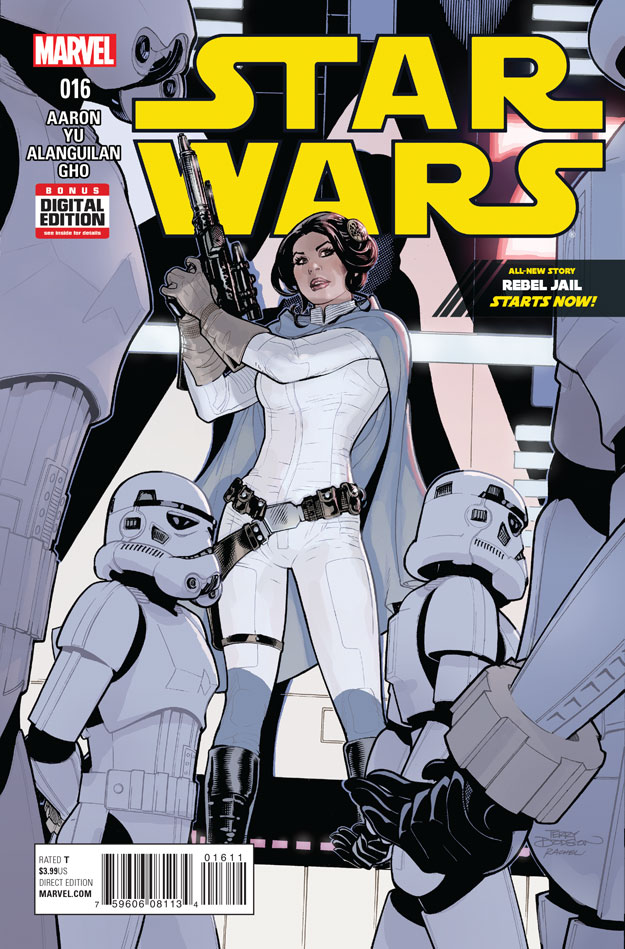 Can the secret Rebel prison hold Doctor Aphra? Well, I’m just not quite sure it can.

Star Wars #16 is a comic filled with a really neat idea, some intriguing character interactions and a straightforward plot. It isn’t necessarily a bad thing, but it isn’t a great thing either. The concept of the Rebel prison is fantastic, part of me wishes the entire issue was just a tour of the place, but the actual events occurring within and outside the prison were very linear. Aaron’s dialogue is great for the “named” characters like Leia and Aphra, but is a bit too on the nose for the prison staff. A warden claiming a prison is inescapable and will never be found is just asking for it, and foreshadowing future events far too obviously. Is this the end of the world? No. Is this up to what has become the usual standard for Star Wars, with some unexpected twists and turns? No, it isn’t. So the net result is a story that has some very interesting ideas, some solid interactions between characters, but a plot that is so linear it doesn’t keep the events of the issue very engaging.

In the win column is Leinil Yu’s artwork, especially where female characters are concerned. During his work on Avengers, I was saddened to see his take on Black Widow, her jump suit perpetually unzipped and her proportions ridiculous. In this issue, Yu’s work is far better, with Leia, Sana and Aphra appearing as kickass, strong women rather than eye candy. Each of them are well represented by Yu, and he builds an interesting setting with the prison. His work in the subplot is solid as well, capturing the humour that follows the scoundrel Han Solo. He seldom has a great plan that goes off without a hitch and Yu’s work captures the adventurous spirit of his subplot with Luke. Sunny Gho’s colour work is great in the prison setting, the unique situation of sunlight casting over everything.

Star Wars #16 is not a bad comic, but it’s missing some of the unpredictable elements that have made issues of the series great in the past. There’s a really cool concept and some entertaining moments with the characters, but the plot moving in such a straight path keeps the good work from soaring.