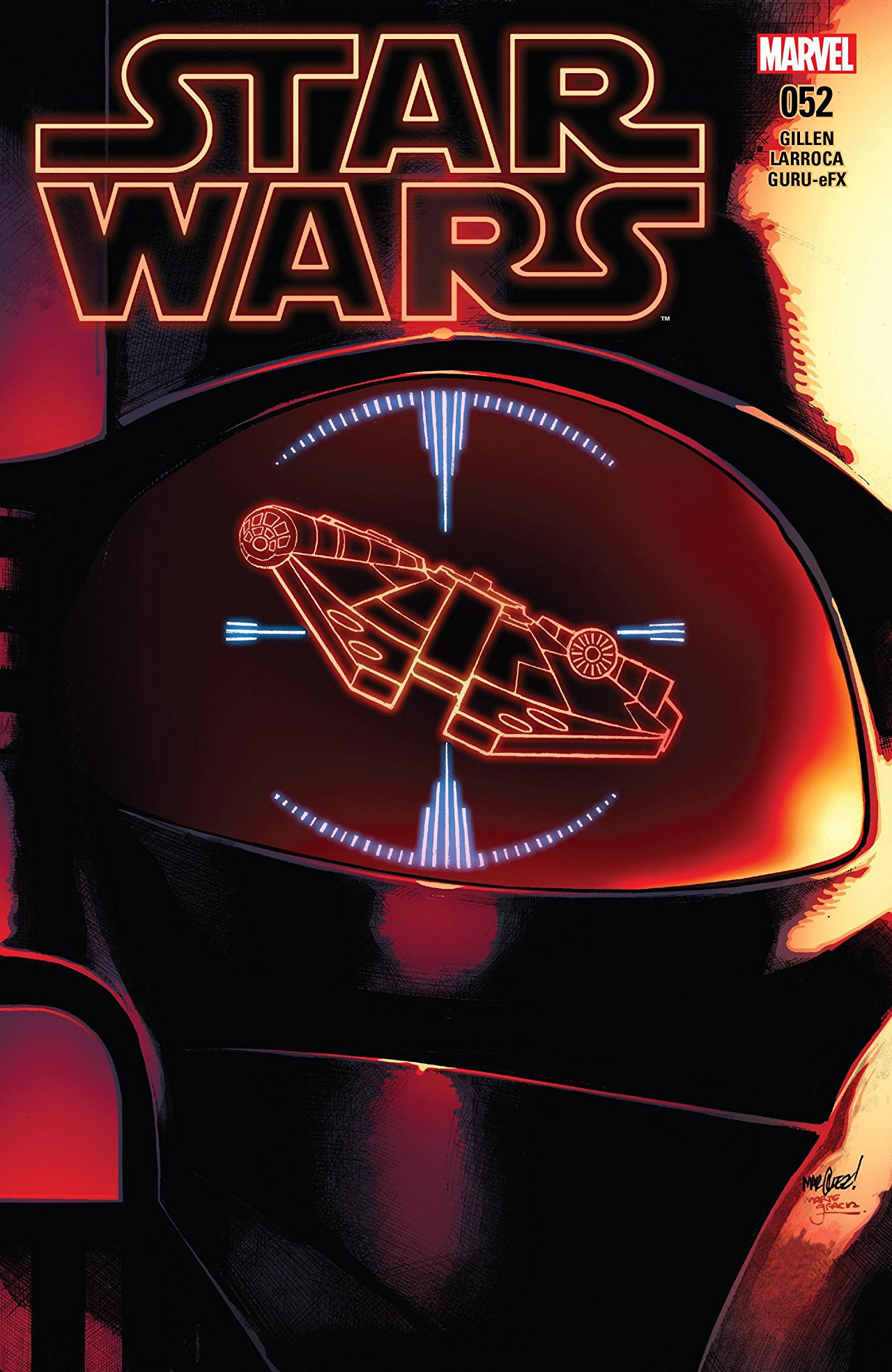 We take a break from the most amazing female villain for an action paced issue with a dash of sentimental tear-jerking. Since the issue 50 reveals, the Rebel Alliance has been trapped and dying while Imperial forces burn the Mon Calamari’s new Rebel fleet out of space. As revealed in the last issue Darth Vader has set his sights on the Millennium Falcon to keep the Rebels from obtaining critical information that could save them. That’s it. That’s technically the whole thinly stretched plot of the issue. However, before you scream, “SPOILERS!” or “Don’t summarize the whole issue in a review,” stop and breath. This, my fellow fans, is Star Wars. There is always more to a space fight than what is just on the action-packed surface.

Not all Star Wars comics have been successful in conveying ship to shop dogfights. However, Larroca’s panels toggling back and forth between ship and cockpit feels just like the Death Star run of Episode IV or the space race of Episode VIII. This is heightened by Guru-eFX conveying the motion through missile trails on the ship wide images, verse the star streaks found in the closer character shots. The Millennium Falcon’s detail makes her just as much a character as Han Solo, Chewbacca or Darth Vader. Full pages are rendered with amazing ship detail by both artist lines and color work. They also emphasize narrow misses, daring choices and sentimental honoring of the past. There are three main layouts found in the issue. The three full page spreads, long five panel pages when the point of view from aboard the cruisers, and the four to five panel mirroring pages that have every other panel bleeding into each other. This last one is used for the ship to ship communication or dogfights previously mentioned. While there are one or two page exceptions to this, it is amazing to go back and look at how much this controls the pacing and feel for action.

Once again Cowles lettering disappears into the background, allowing the art to speak for itself. A few key choices make the issue so natural and easy to read. A few examples include using a lightning tail on C-3PO’s dialogue balloons which quickly convey his metallic voice. Another example is the bleeding capitalized letters with a jagged font which cause Chewie’s vocals to be immediately recognizable. It wasn’t until I was through my second reading of the issue that the lack of sound effects from the outer space fighting really hit me. While the Star Wars movies are full of extraneous sounds, the comics instead allow the art to sell the excitement.

This also means there is a limited amount of Kieron Gillen’s dialogue. Instead of being overstuffed with heavy exposition or witty banter the story clearly sounds like the characters. C-3PO points out the obvious, that Han wishes to ignore. Han provides limited responses showing how busy he is with flying and surviving. The brevity, along with mass casualties, sells that they’re in a dire and fast-paced situation.

Some readers will be put off by the “stall” in the story for an issue long action sequence. The current villain does not make an appearance, nor does Leia. The story does not move forward much except to connect the dots in an emotional fashion to a prequel movie and show how the Rebels are able to escape the sabotage set up by the previous issue. In fact, fans who appreciate a time when only one woman is seen in Star Wars in the background might feel a kinship to this Han-Luke centric issue.

This plot shift from Han following through with his mission to Luke provides a smooth transition. With just two lines Gillen is able to make every Star Wars fan get stardust in their eyes. You’ll be hard pressed to either not breakdown into a sobbing mess or fist-pump with excitement. A burning squadron question gets answered. It’s these tiny little details that many fans wish were easter-egged into the movies. Allowing them to instead be nestled into the comics creates an organic experience that further underscores their canonical connection to the overall saga.