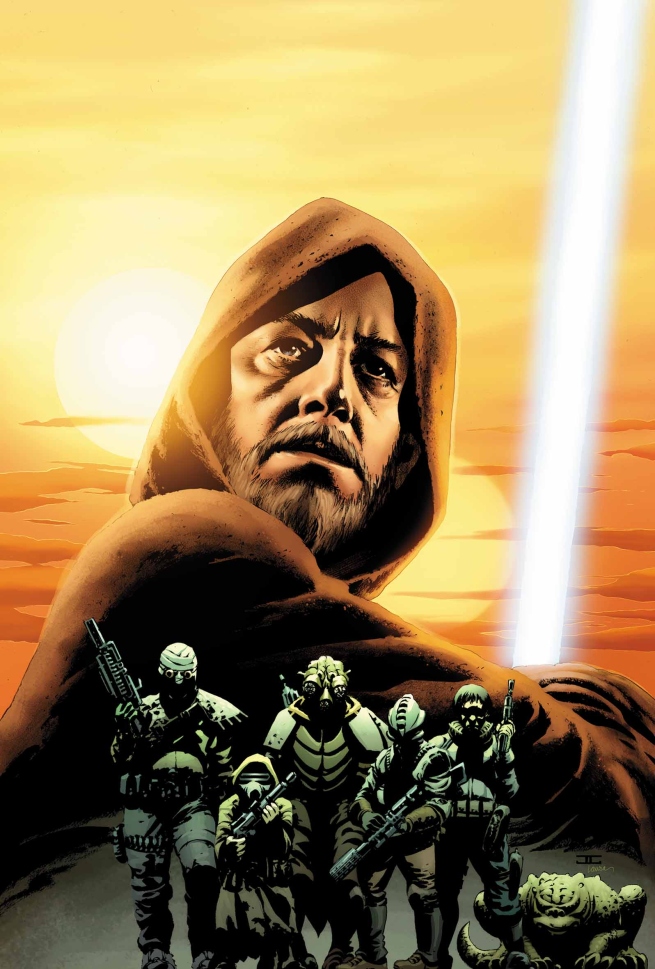 In the exciting universe far, far away of the new Star Wars canon — stories which previously might not have packed a large punch due to decades of a flooded narrative-market full of Sith Lords — Jedi from every era, and alternate universes which surely seem more dynamic. When stacked up against the previous mountain of now non-canon Star Wars content, a story like the one Jason Aaron crafts in Star Wars #7 might seem insignificant. But in truth, and partly because of a new canon free of other interpretations of Obi-Wan, Star Wars #7 is one of the most important comics Disney, Marvel, and Lucasfilm have worked on to date.

The set-up is simple: Obi-Wan’s journal, a McGuffin which has proven to be most interesting during its first arrival in earlier Star Wars comics, reveals a story to Luke about himself. Or, to be more precise, about Obi-Wan’s view of Luke when he was very young.

To be blunt, Luke Skywalker and Obi-Wan never had a great deal of depth to them in their film origins because, well, they were not explicitly meant to: Obi-Wan was meant to be a sagely guide for Luke as he set out into the larger world and Luke needed to be just bright-eyed enough of a teenager to hungrily seek his destiny. With some narrative hindsight, both characters always lacked first ground for their better or worse qualities to be explored. Did Obi-Wan ever have bad days? What were they like? Was Luke always a good kid? Jason Aaron answers these kinds of questions through the pages of Star Wars #7 with genuine intimacy and passion.

Obi-Wan, while having been fleshed out previously thanks to the Clone Wars cartoon series, is presented by Aaron in his first canon role as a survivor of the Clone Wars, albeit one who cannot reveal that he survived and one whose philosophical place in the universe is gone. It is heartbreaking to read Obi-Wan suffering from depression on Tatooine as he comments how his master never trained his to embrace fading away into nothing, alone.

Obi-Wan’s suffering and his desire to help others despite himself is a bold take on the character which, to this reviewer’s knowledge, has seldom been explored in comic form outside of a few older Star Wars Tales comics and some content from the Star Wars Legacy series. Star Wars #7 explores the darker moments of Obi-Wan’s exile, but in the end, it also shows some of his amazing inner strength.

What serves as the comic’s greatest moment is quite small but is needs to be addressed because this is what makes the comic work: young Luke’s expression of childish ‘bravery’ in the face of dangerous gangsters. Aaron’s young Luke is brave, but foolish. He stands up to danger even though it should surely mean a fate worse than death. This quality seems like the kind of thing Uncle Owen would spend years guiding him away from, but is also exactly what Obi-Wan (and, the readers) need.

With one simple expression by the talented Simone Bianchi’s art elevates the comic’s emotional core to wonderful levels. It is just too amazing to see something about Luke depicted to simply and so wonderfully through one panel. It is a great moment to ‘connect’ with Star Wars through this comic and Bianchi’s art is what makes the characters click with Aaron’s story.

Special praise must also be given to Bianchi’s depictions of Obi-Wan’s facial expressions. While his character has not yet transitioned fully into ‘Old Ben,’ thus putting him in a not-Ewan-but-not-yet-Alec position, it is Bianchi’s art which carries the weight of Aaron’s words. While reading Obi-Wan’s journal, if you get a moment, study his face. The expressions literally say so much about this short, sweet story.

If you have not yet picked up any of the Star Wars comics, pick up this one. It is a wonderful story, it presents characters we think we know in ways we do not expect, and it is simply fantastic.