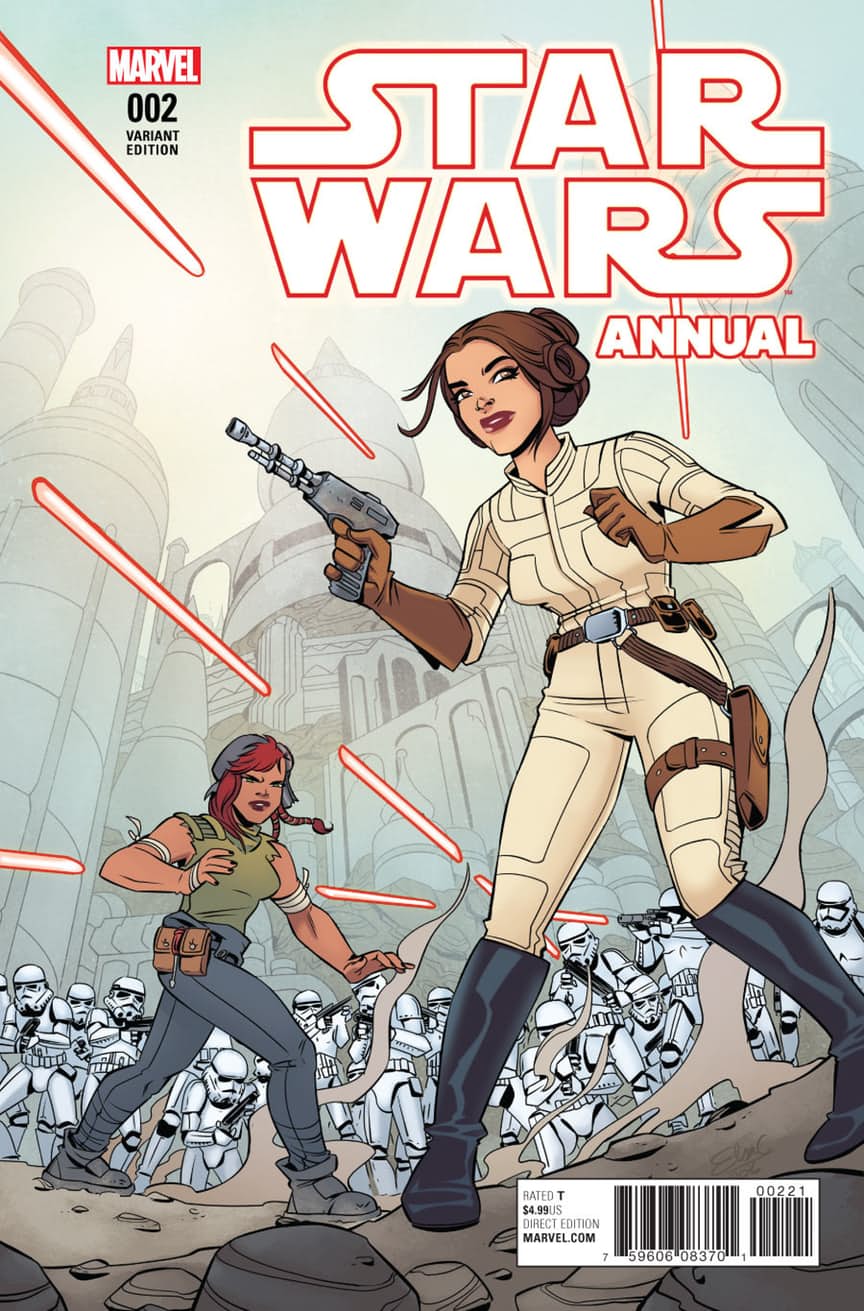 The resistance to the Empire by the Rebel Alliance is at the very core of the Star Wars universe. Yet, it’s easy for people who feel like they have no stake, to be upset at those they feel as warmongers. Since that does not play easily into the good guys vs bad guys world built in the original Star Wars universe, it’s a concept not generally explored.

That changes with this latest Star Wars Annual. The stand alone issue explores just what takes someone from merely just existing under tyranny, to resisting it. Princess Leia is injured at finds herself injured and her fate dependent on someone who has no love for the Empire, and zero respect for the rebellion.

While action and excitement can be easily found in this issue, it’s the quiet and desperate moments that own this story. The events over the last month in America, along with daily updates of changes in the news, have created a crisis of government for some, and perturbed annoyance, at those who are concerned, by others. It’s the latter attitude given off by the story’s main character, Pash.

Anyone not aware of the comic creation process would think that this book was put together in the last few weeks to reflect current events. Pash’s perturbance with the Rebel Alliance is not without merit. Kelly Thompson has woven a story where Pash’s justification for her anger and hardships are tied directly into the actions by the rebels and Galactic Empire. Time is taken over the first few pages to unfold who Pash is and what has happened on the planet.

The Emilio Laiso’s character design for Pash is invigorating. Pash is the opposite of stick thin or “classic” comic beauty. Well muscled, physically skilled, but also a scientist, Pash is a character designed to buck comic norms, with logical character reasons. Her physique and goals all filter back to her driving motives and anger.

The pacing of this story lingers, then flies, on the mostly overlapping panel layouts of Laiso. Sweeping views are juxtaposed with extreme close ups and tight character shots. There is little to know feeling of downtime, despite the heavy conversation and debate Thompson has Pash and Leia engage in throughout the story.

This is created by a combination of Laiso’s unique faces, made even more descriptive with Rachelle Rosenberg’s colors and key placing of letters by Joe Caramanga. None of the panels feel like the elements are fighting each other for space. It helps to create an emotionally dense and immersive reading experience. There are also key underwater sequences where Laiso’s art and Rosenberg’s colors are allowed to take over the narrative and drive the tension up for Pash and Leia.

The standalone nature of this story is not an exaggeration. There is no need to have read any previous Star Wars comics before to enjoy this story. Those with just the smallest cursory knowledge of the universe will be able to understand what is happening. There is a mixture of indictment and persistence from the characters that made me take stock in my own personal causes. Readers looking for a story of hope will enjoy this roller coaster.