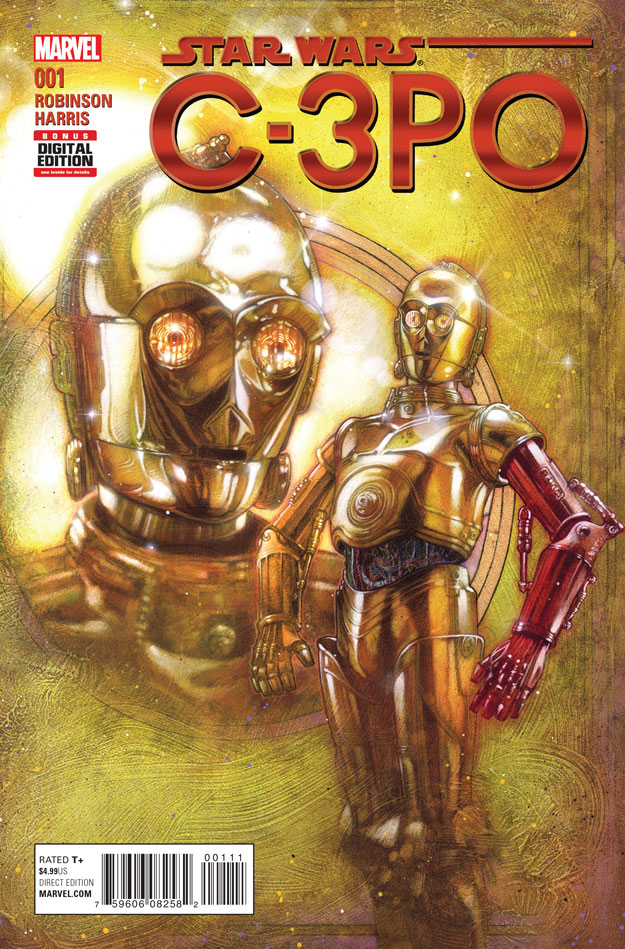 When I think about all of the story possibilities in the Star Wars galaxy of the Marvel Comics Universe, C-3PO does not leap to mind as a titular protagonist. At all. He only comes to mind as part of the ensemble surrounding any number of characters first introduced in the Star Wars film franchise. Except the creative team on this comic is the same creative team from one of comics’ greatest series ever – writer James Robinson and artist Tony Harris.

Even with a fan-favorite writer at the helm, the story of C-3PO’s solo adventures is a hard sell. He’s always been the straight man to the comedian, the uptight, virtual prop of a character that has a line or two designed to crack up audiences or underscore the tension. Unfortunately, in Star Wars: C-3PO #1, Robinson isn’t afforded the luxury of space, character development, or even humanity to play with. Metal Men would provide responsometers. The Vision has a tortured past and at least had human brainwaves at one point. C-3PO is a basic protocol droid prone to fits of verbally oversharing set on the hero’s journey.

Except C-3PO isn’t a hero. He’s barely a sidekick. Complicating the story is the fact that C-3PO is sent into the field with five other droids. By default, given that it is his title, C-3PO becomes the leader of said group. That group includes (apologies for misplaced dashes, as letterer Joe Caramagna spelled out every character when they were mentioned in dialog: PZ-99, a combat droid who conveniently is present for the most intense action scenes; C-O34, a construction droid with a vocabulary only slightly more impressive than Groot; 2MED2, a medical droid; VL-44, a cross between Fantastic Four’s H.E.R.B.I.E., WALL-E, and the multi-armed, tread-mounted droid from A New Hope; and OMRI, a Death Star Droid prisoner with knowledge of the whereabouts of Admiral Ackbar. No astromech droid and no power droid, just these six droids with 3PO at the point.

Robinson crafts conversation between OMRI and C-3PO that verges into philosophical pondering, as the droids discuss allegiance and purpose. Being from opposing sides, the two bipedal droids had me drawing comparisons to Enemy Mine, as the duo must eventually ignore programming in order to survive.

Licensed comics lend themselves to stiff drawings and droids magnify that. Rather than focus on emotions or movement that simply isn’t present in the stiff droid characters, Harris decorates the pages with the equivalent of still life drawings. His color choices are sharp and bold, with a lot more black regions in this story than one might expect from a comic about droids. The coloring adds to the story though, as the droids are neither overly emotional nor animated.

This is a comic with a purpose: tell the story of C-3PO’s red arm. It does that, but it fails to give readers much of a reason to celebrate. Robinson adds a bit of sentimentality to C-3PO, and his script sets up some stories for the future of the Star Wars brand at Marvel.

All in all, Star Wars: C-3PO #1 is not bad. It’s just not memorable beyond the completion of the assignment. The end result is by far more memorable than the journey. Part of that may be due to the delay (originally this issue was slated for a December release) and part of it may be that the expectations were ill-defined regarding the criticality of this tale. The journey for C-3PO is less important than the information in one of his traveling companions. The story of C-3PO’s existence, to be certain. Robinson and Harris did a fine job with the pieces provided, but this story just isn’t the best use of their talent. Maybe next time Marvel could have them take a look at some of the patrons of Maz Kanata’s place.