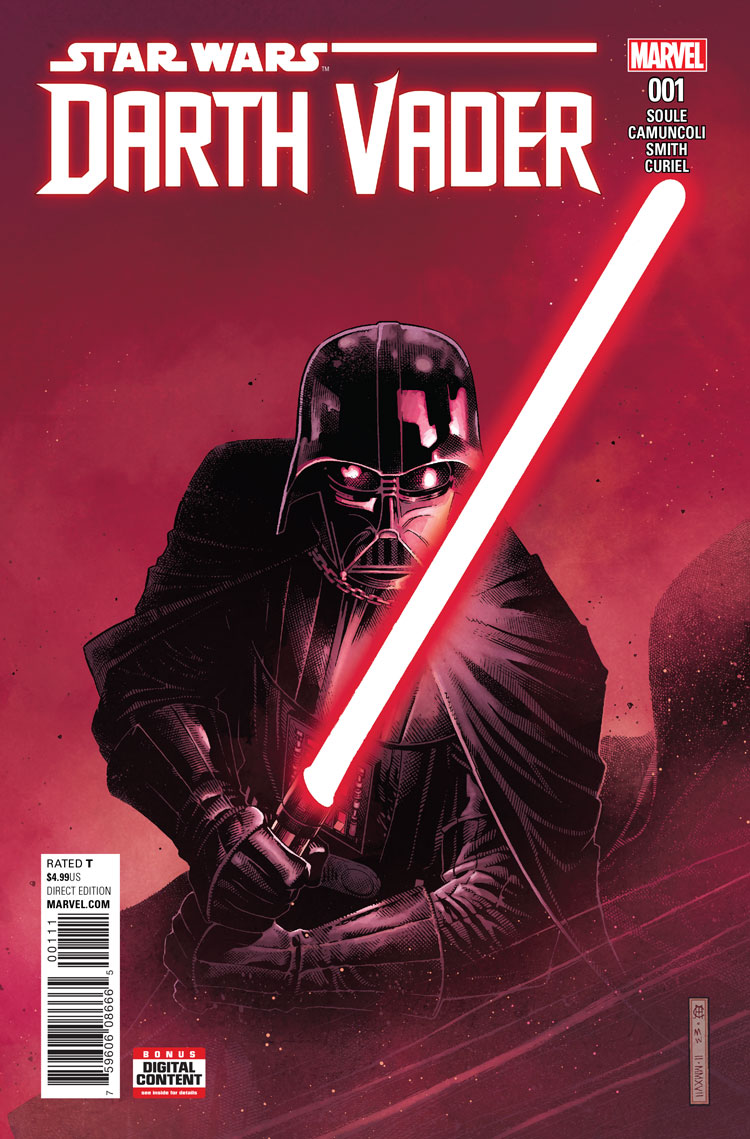 That’s right, this series picks up right after one of the most memorable moments of Episode III, when the rage hits peak levels and the Darth Vader everyone knows takes his first steps into the Star Wars U. In this first issue, the team shows readers the first steps of “Lord Vader” on his journey to being the ultimate force to be reckoned with.

Soule captures the awkwardness of the relationship between Vader and Palpatine well in this opening issue. Soule’s Vader says volumes in his nearly complete silence, with readers knowing the character is confused and in unbelievable physical and mental pain. When he lashes out later in the issue, you can feel the pain spilling forth and I bought the suffering in this issue. You can see Anakin leaving as Vader takes hold, which is no easy thing to sell when you’re writing someone who stays mostly silent. Soule deftly leaves the talking to those around Vader, capturing Palpatine’s awkward fear perfectly. The Emperor is scared of his apprentice, and Soule does an amazing job of balancing how he interacts with Vader. It’s angry, fearful and filled with rage…just as it should be.

Plot wise, the focus of Vader’s quest seems logical. While not an exceptionally complex tale thus far, the topic of this particular story does make it feel like we are following the first steps of this iconic character. For this reason, it doesn’t conflict with Gillen, Larroca & Delgado’s run, which was appreciated as that story left a brilliant stamp on the character and the Star Wars Universe.

Giuseppe Camuncoli’s pencil work is sharp and he and inker Cam Smith are a great combo to tell this tale. The linework has just the right balance of photo realism and style to make this comic feel dynamic and exciting. Vader exudes power, pain and rage at all times, which is no easy feat considering the team has nothing but a black mask to work with. The layout work is strong and I’m excited to see more of Camuncoli & Smith’s work in the future.

David Curiel’s colour work elevates the line work to the next level. Tone is everything with a Darth Vader book, as it has to have a Star Wars feel without being as optimistic and bright as a book featuring the core cast, or the “heroes” for lack of a better term. Darth Vader #1 is all about suffering and rage, which Curiel captures very well with his palette. The shading work where the mask is concerned is handled very well, as that iconic helmet can, at times, look awkward…but you won’t find that here.

The lettering is flawless in this issue. When I see Joe Caramagna’s name associated with a title, I don’t fret…and Darth Vader #1 is another example of why in a string of countless issues featuring rock solid work.

A comic like this only works if the whole team is working as a single unit, and that’s what readers get to see with Darth Vader #1. This series kicks off with a bang and wastes no time diving into the rage, pain and hurt that are Darth Vader’s first days. I’m all in for more of this, bring it on!