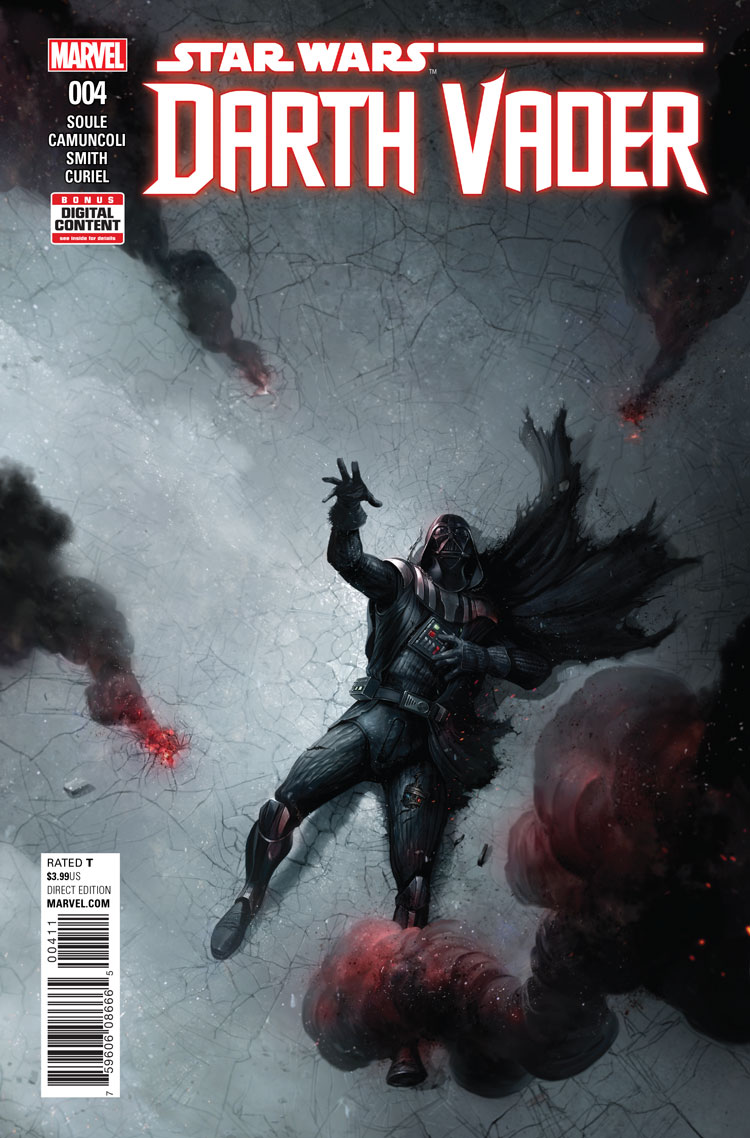 The fury of the Dark Lord of the Sith knows no bounds.

Soule, Camuncoli and the rest of the team deliver the finale of Vader & Kirak’s battle, one that readers know will not result in defeat for Darth Vader, but the fury of how he finishes this conflict with Kirak is telling of where this character is in his journey to becoming a Dark Lord of the Sith. The creative team is not mincing words here: readers are being given Vader the monster with this series.

This fits, considering the timeframe. This Vader is fresh from his defeat at the hands of Obi-Wan Kenobi and is far from the calculating villain from A New Hope. This Darth Vader is raw and cruel, emanating hate from every bit of his mostly mechanical self. It is an interesting time to examine, and even though the character is mostly silent through the issue, his rage speaks volumes.

Soule uses other characters to show Vader’s cruelty. He’s built Kirak into a somewhat stereotypical Jedi Master with ideals and values that show how Vader has fallen by acting as a mirror for the Dark Lord. He’s powerful but nowhere near the class of Vader’s rage, and the team shows that in a very impactful way at the end of this issue. There is no honour in this Vader. There is no hesitation to kill large amounts of people. There is only death and destruction. While I think that point had to be made to set the table for the character going forward, there were no twists or turns in this issue at all. The story played out exactly as I expected it would, which was somewhat disappointing.

Camuncoli’s pencil work is sharp, and I like how Smith inks his work. I’m a big fan of this duo working together, and Dav Curiel’s colour work creates a well rounded visual package. I was a bit thrown by the brightness of the issue overall, considering how dark the actual story is, and at times I felt like the mood of Vader wasn’t necessarily the dominant factor in the visuals. Things were almost too crisp and clean at the finale of the issue considering what was occurring, but the art is never poorly executed. The team uses some unique layouts throughout the issue and Joe Caramagna’s letter work is solid, as per usual.

Darth Vader #4 brings the iconic character’s first conflict with a Jedi in this series to a close, but I have to admit the final pages of this issue left me wanting more…and not in the “I need the next issue right now” kind of way, but in the “oh, that’s it?” kind of way. The story is not poorly executed, there just isn’t a whole lot to it other than showing Darth Vader is angry and powerful, which the team does convey well. This timeframe is ripe with storytelling possibilities for the Dark Lord, so here’s hoping the next issues take a less straightforward path.