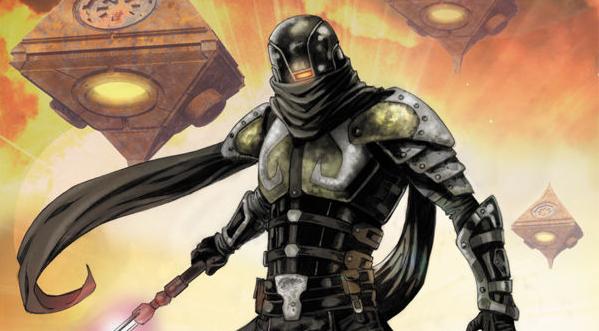 It begins. John Ostrander and Jan Duursema have come down from an epic run on Star Wars: Legacy, a series set in the future years of the film universe many fans know well and have launched themselves millennia backward in time to the very beginning of the Star Wars saga. The Force has just been discovered, it’s complexities are still being learned and we finally get to see the formation of the Je’daii, those who become the Jedi and the Sith, and where they learned to wield the Force. While some may think this is a niche comic, only appealing to and written for the most die-hard Star Wars fan, they are completely wrong. Ostrander and Duursema have crafted an excellent first issue that is accessible and interesting even if you haven’t seen the films or have never delved beyond the films before. This is a whole new cast of characters, just like in Legacy, and Ostrander is great at building a new world within a very strictly defined one. The opening pages of this first issue are some of the strongest pages I have read in the past few months. Ostrander’s narration of the discovery of the Force is poetic and flows amazingly well, covering a ton of information while also being light and letting Duursema’s art shine. Ostrander skillfully  transitions the historical parts of the issue into a story and I found that he tells a more gripping tale in half an issue than many comics seemingly can in twice the space. This is going to be a more raw version of the Star Wars universe and if issue #1 is any indication, it is in the hands of a strong writer.

Ostrander shares storytelling credits with Jan Duursema and rightfully so: this is a cohesive creative unit and the art tells as much about the birth of the Jedi Order as the words do in this issue. Duursema continues her high quality of penciling in this issue and there are no inconsistencies, even amongst the varying races of the Star Wars galaxy. The art is the shining highlight of many pages in this first issue and Duursema easily handles much of the storytelling in the initial pages. This is a strong creative duo that is completely in sync and we, the readers, get to reap the benefits of this great tandem.