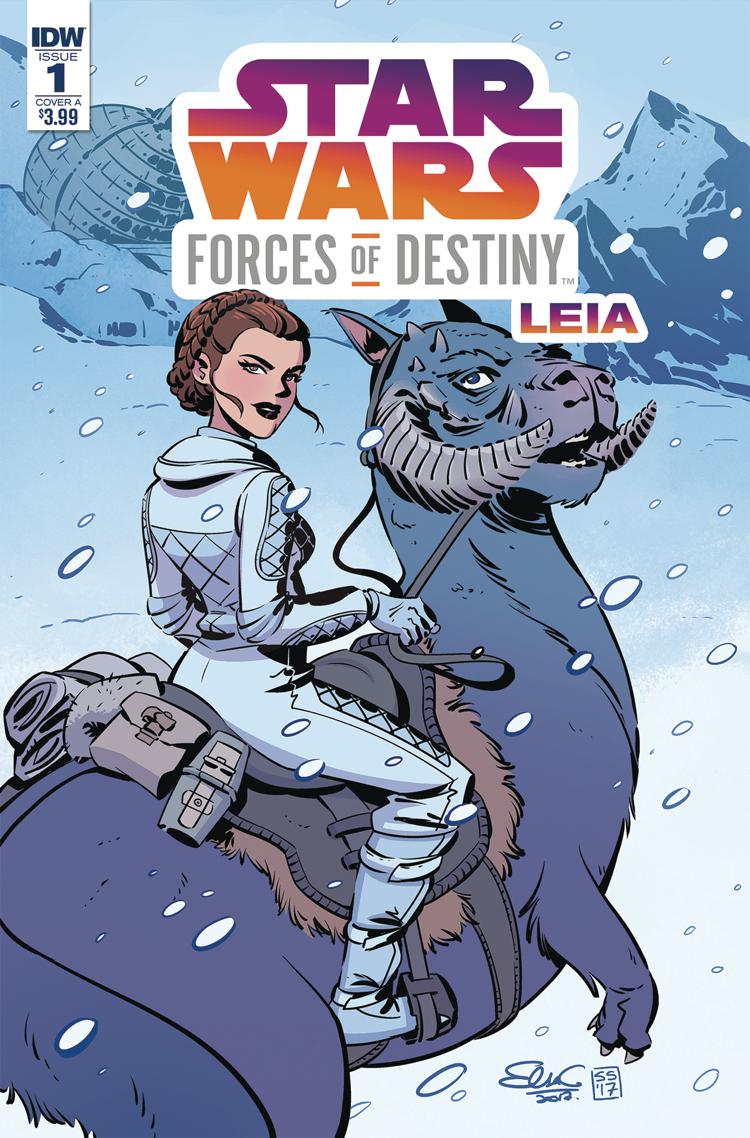 In the early days of the first trilogy of the Star Wars saga there were a lot of books and toys for young fans to enjoy. However, most times they were just adventure story’s that pit our heroes against some kind of new weird creature and planet that had little to do with what we had seen in the series before. In fact many times the characters, ships and weapons they used were illustrated and portrayed incorrectly.

Now with the franchise being monitored a lot more closely we are getting tons of content that aligns with the movies that have established it. Comic books like Star Wars: Forces of Destiny – Leia are a joy to read because they stick to the basics of what makes Star Wars so popular while giving us new content.

Elsa Charretier’s and Pierrick Colinet’s story is exactly what it needs to be. It’s a story full of hope, perseverance, and Leia. The timing for the release of this issue is perfect as we remember the loss of our Princess a year later. The story preserves the memory of what she stood for and the ideal for which we should be striving for.

Although Han and Hera are both in the story, it very rightly keeps the focus on Leia’s struggles and triumphs. They did a great job at capturing the Star Wars feel in this story with the character dialogue echoing our beloved heroes. It is easy to imagine the original actor’s voice say the lines as you read along. There is plenty of humor throughout the story that will make the reader chuckle out loud more than once. It’s perfect for a younger generation of fans while still being the Star Wars that an old generation of fans will be familiar with.

In some ways it feels more Star Wars than some of the current movies that have been released. There is only part of the story that feels out of place. It’s easy to guess why the scene is included due to the popularity of this character but it interrupts the flow of the story. However, this is only a small issue and the rest of the story is so much fun that it is soon forgotten. Overall it’s a great example for anybody to learn life lessons about getting back on the Tauntaun again and again.

Elsa Charretier’s style is a perfect match for Leia in this story. It’s a playful look that gives Leia and company’s adventure a fun tone. Charretier uses quite a few panels to tell the story but it’s not cumbersome at all. In fact it works great especially since some of the panels are used to create a larger image. It also gives the still images a very animated feel to it as well as a quick pace.

Altogether, the art of the panel layout is exceptionally beautiful. An especially impressive sequence appears during an avalanche scene and imparts the feel of the character being caught up in and lost in the snow. The facial design of the characters are all pretty similar to each other but with their costumes it’s easy to tell who is who. Han Solo who usually steals whatever scene that he appears in is skillfully kept in the background even when he has speaking parts. Rightly so, this is a story about Leia.

Sarah Stern does a really outstanding job on the colors in this issue. Though the story takes place on a planet dominated by the color white there is an abundance of lively colors. Most of the colors occur in the backgrounds of scenes to set the mood and really punches up the story as a whole. Where bright colors aren’t used in the background cold but friendly blue tones make up the base for each scene. It helps to make Leia, who is wearing very light colors, stand out from her surroundings.

The story is very text heavy with Leia sharing a lot of her thoughts and feelings about their situation but it is an easy read due to Tom B. Long’s lettering of the issue. It is very readable and keeps the text light and smooth.

Star Wars Forces of Destiny – Leia is one of the better Star Wars comics that you will find on the shelves right now. It captures the spirit of Star Wars and it’s character to provide the reader with a fun story that also conveys a message. It’s a children’s story that reaches adults as well and continues the legacy that we love. Don’t miss out on this book who’s story and art that are a must have for any fan.