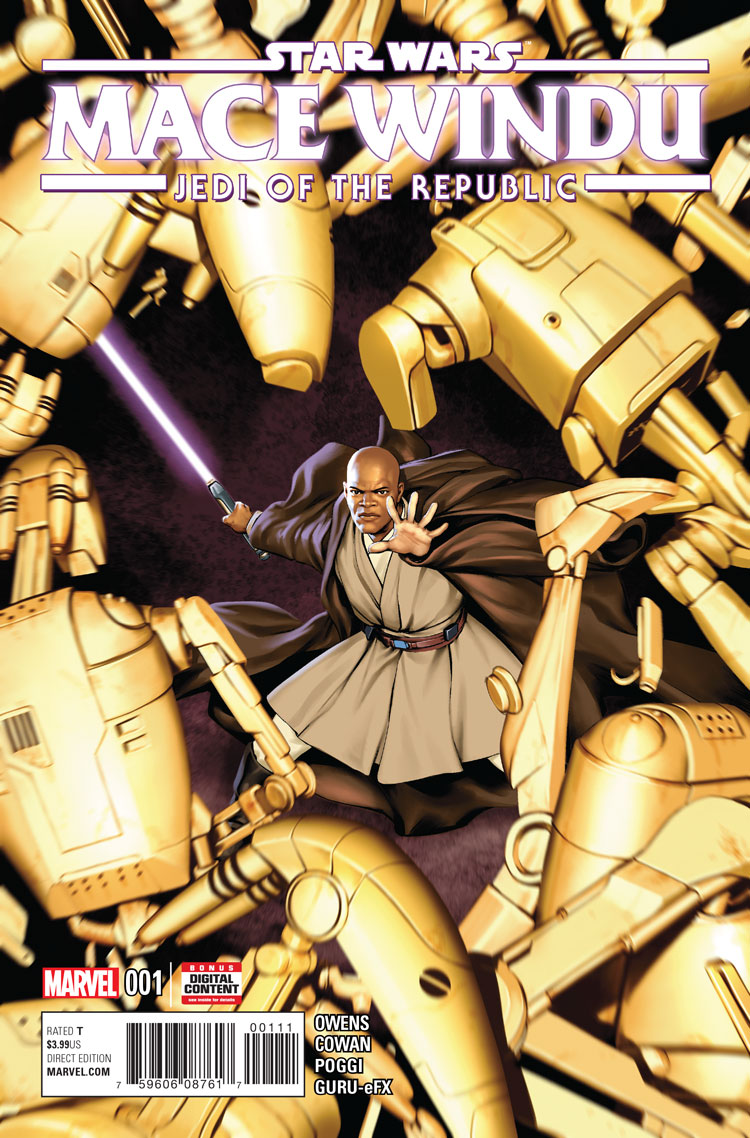 Mace Windu is one of the most memorable characters in the Star Wars Universe. He commands the council and commands the room, and is always presented as a stalwart leader.

In his solo series, I expected more of the same. The expectation was for Star Wars: Jedi of the Republic Mace Windu #1 to reinforce the strong personality that Master Windu has always shown, and provide an interesting window into his solo adventures. What this book delivered, though, is something completely different, and it feels like something is missing.

In this introductory issue, Mace Windu and a team of select Jedi leave their posts to go to war. This is, as any Star Wars fan knows, against Jedi nature. The discussion of the peaceful Jedi way in opposition to the responsibility of fighting for he greater good seems convoluted and drawn out.

Overall, the level of exposition makes the first half of the book feel sluggish and directionless. When new characters are introduced, more lengthy exposition intercedes with the action, veering the book off course. There are so many new threads starting in this issue, that the “big reveal” at the end and that reveals course of the comic comes out of nowhere, and therefor lacks gravity.

Though the plot started to piece together, the art was consistently distracting. Mace Wind is an iconic character. While a little artistic re-imagining is necessary for comics, there is little consistency n the way characters are presented. The stark differences between the depiction of characters drawn in the background or at a distance, compared to the same characters drawn in focus or close up, is jarring.

Some angles, especially for Windu, make the characters look completely different, and makes the jumps between characters and conversations difficult to follow at times. The shading is also intense at times, creating facial angles and dark, unnatural shadows that distract from the page.

Where the art truly shines is in when Mace Winds and his team land on the alien planet. The machinery and droids are well-drawn, and the backgrounds are amazing. The colors help the art along here, creating glowing flora, deep grey-blue skies, and incredible backdrops that set a new stage for the series.

As far as plot movement, there was not a lot of forward momentum here. The exposition was overwhelming. When it was disguised in dialogue, it weighed down conversations that felt convoluted and forced. However, the issue starts to bring pieces together toward the end. Besides some humor from the droids that fell flat and some liens that seemed out of character for droids, it seems like they might be the stars of this book. hopefully in future issues, things move a little more quickly and clearly.

This is not a bad comic, but it does seem to be missing something. It feels like an extended, illustrated book summary rather than the introduction to a new series. Mace Wind is a strong character, and hopefully his personality and the interesting new crew he has pulled together is enough to push this book forward. The concept of Jedi being forced into battle is intriguing, and this situation sets up the bare bones for what could be a great story.

With so many Marvel Star Wars comics on the market, the separate storylines and solo books can get lost in the mix. With Mace Wind, it may be the case of one too many individual characters getting their own title, when they can’t necessarily carry it. This is an old mistake for Marvel, and it would be unfortunate to watch talented teams and great creators get lost in the mix as the Star Wars comics overflow the comic shop shelves. Hopefully Star Wars: Jedi of the Republic Mace Windu can find its stride and bring it around with issue #2.