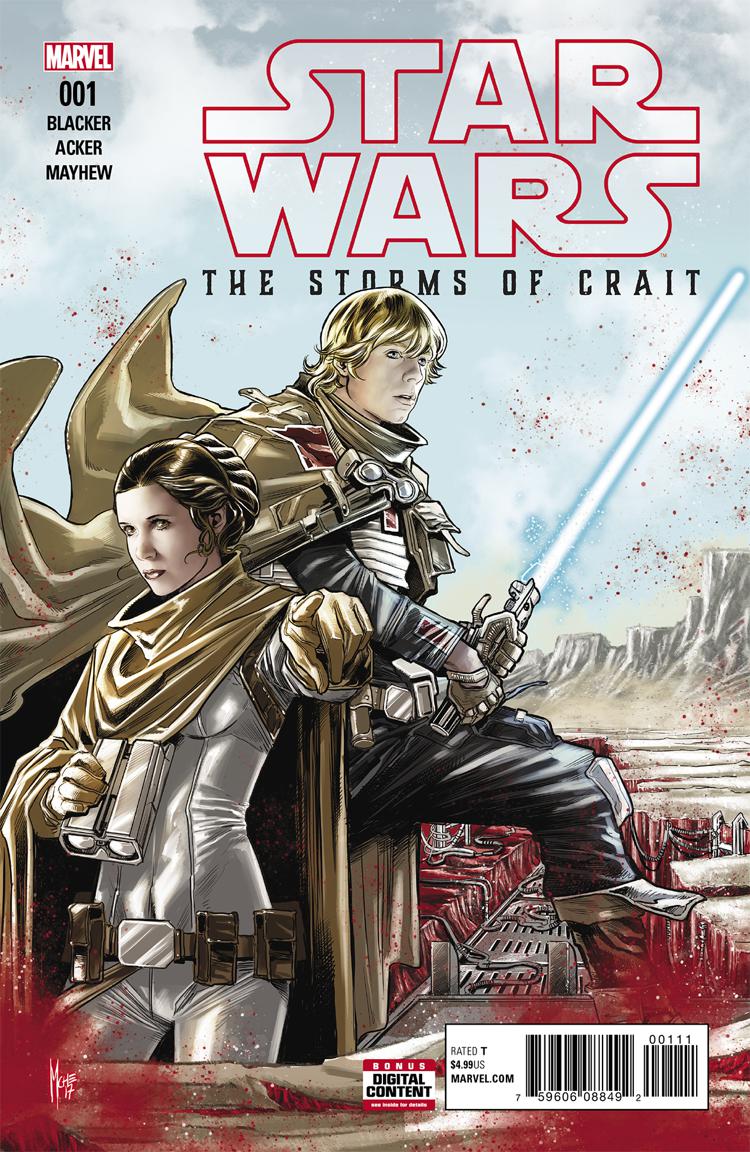 Leia, searching for a permanent base for the rebel forces, brings Han, Luke, and the rest of Red Squadron to the abandoned mining planet of Crait to scope out the area. However, will things turn out as Leia wants? Find out in this exciting issue of Star Wars: The Storms of Crait!

I have been a fan of Acker and Blacker since their I discovered their podcast the Thrilling Adventure Hour years ago, so I freaked out a bit when I saw that they were able to land a gig writing a Star Wars comic. They bring their great chemistry with characters, humor, and well-positioned moments of emotion to the issue, keeping to the true voices of the characters while adding their own touch.

While the relationships between the three original main characters are well-written, my favorite pieces of writing come from the discussions between Mon Mothma and Leia. Here are two great women in power talking through their differences, finding solutions to what they both want to do with the rebellion, admitting that each other have great ideas while not having to constantly be entangled in a dick measuring contest. I like that even when things may not go necessarily to Leia’s plan, Mon Mothma doesn’t rub it in Leia’s face – she admits that while the plan wasn’t exactly a success, she does believe the idea behind the plan is a good one. This kind of teamwork between leaders is great to see and refreshing to read.

Every panel feels like a realism depiction of a Star Wars scene. I’m blown away by the amount of detail that can be seen on the ships, the characters. You can see ever shadow that would be created by light, heck, every bump on each character’s face or even the slight dimple of a chin.

My favorite scene is a skirmish between the red squadron and the scar squadron.

Stormtroopers lay sprawled on the ground. Some are dead. One is about to get a hard kick to the stomach by a rebel. Another has two guns pointed at him. Wedge Antilles raises a chunk of metal above his head.

“I’m from the Red Squadron, you hear me?”

He hammers down the edge of the chunk of metal into the neck of the storm trooper, a small explosion ignited by the forceful entrance of the unknown object.

“We destroyed the Death Star!”

He stands a proud conquerer above the dead storm trooper, his eyes black with rage and adrenalin, his face cut by the fight, blood dripping down in streams, sand pounding onto his face like rain.

“You want to come after Wedge Antilles…you better bring a star destroyer!”

It is a powerful scene of war and animalistic anger. It’s one you don’t want to miss.

Read Star Wars: The Storms of Crait. Sure, it doesn’t exactly have too much to do with the movie besides the location, but it is a great story that should be read.