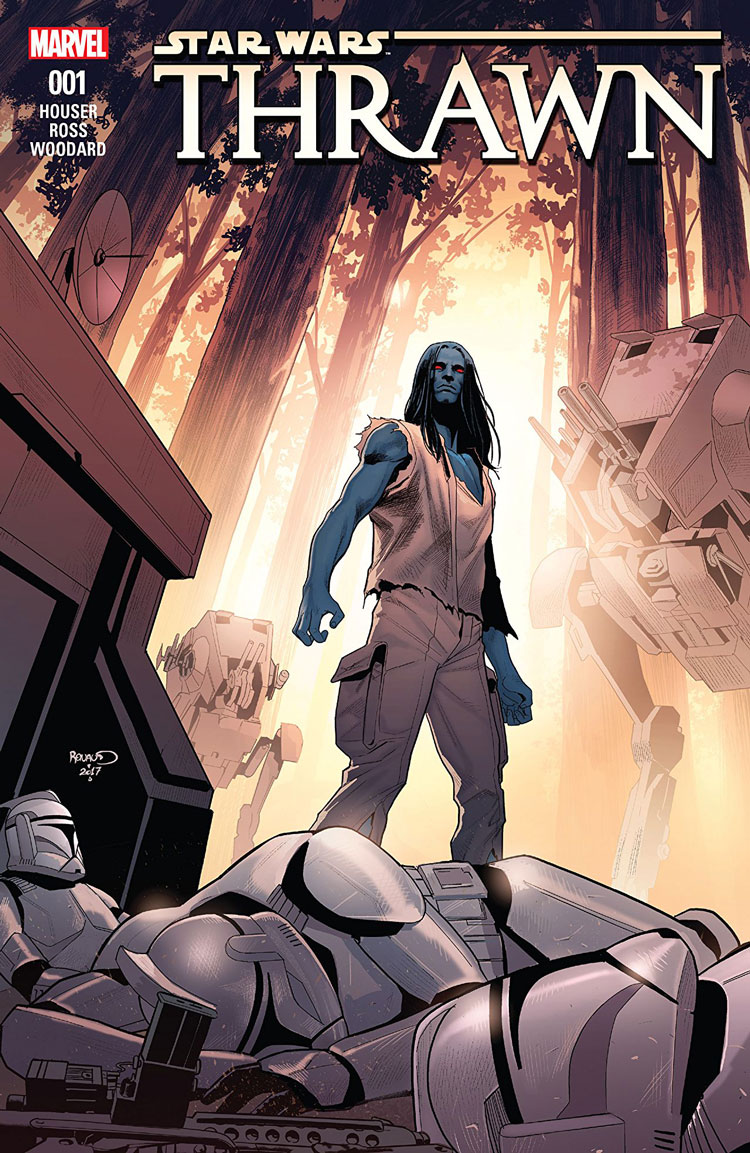 Timothy Zahn’s novel, “Thrawn,” has been on my to read list for quiet awhile. Between his center stage appearance in the now Legends labeled “Heir to the Empire” trilogy of Expanded Universe books, to Thrawn’s role in the Disney cartoon Star Wars: Rebels, he is one of the most captivating characters in Star Wars history. So, when I heard they were adapting the book for a Marvel comic, I thought, “I can get this read before the comic comes out.” It didn’t happen. There will be no direct comparisons or commentary of the comic verses the novel. If you are not aware of who Thrawn is: he’s an Imperial Admiral Who rose through the ranks quickly because of his ability to throne multiple steps ahead of his enemies. He is generally considered one of the most cunning villains in Star Wars history, whose intellect it’s striking and has a large appreciation for learning about the cultures of all of his enemies… often so he can use what he knows against them.

Instead of a “from the beginning” origin story for Thrawn, the comic focuses on Thrawn’s entrances into the Galactic Empire and rising through the ranks. There are a few panels and dialogue that hint at Thrawn’s history with prequel Anakin Skywalker. This keeps any potential redundancy or overlap with that era far away.

Line work in Luke Ross’s art and intricate shading in Nolan Woodward’s color creates detailed, rich scenes from the beginning. Opening on a jungle, on an Outer Rim planet, the art starts off with very structured nine panel pages, filled with these details. As the story progresses, and Thrawn appears, the paneling slowly begins to lose borders or overlap. It is a visual cue of the Imperial officers losing control of the situation and Thrawn showing off his skills. It is a pattern that repeats throughout the story. Key moments where Thrawn’s cunning comes into play is hinted at by panel structure.

The same is true in the appearance of the Emperor. However, this time color takes over the control. Gutters and borders go dark showing the Emperor as having the control, while recognizing Thrawn’s abilities. Houser’s dialogue does a great job of keeping it simple. A lot of power is conveyed in short phrases. Thrawn is the type of character that someone could easily have speak too much. If a writer were desperate to try and “show off” Thrawn’s ability to outsmart others in the room, speeches could get longwinded. However, this creative team has struck a great balance with less is more. This is much more indicative of the character that fans currently enjoy.

There is some smaller commentary and parallels made about racism, bullying and othering within society, schools or military ranks. It’s mostly in the treatment of Thrawn as an alien and Vanto as someone from a territory outside the main planets found within the Empire. There is no great morals or lessons here. Instead, it’s used to highlight Thrawn’s cunning and ability to stay a step ahead of those out to get him.

A unique relationship is created between Thrawn and a character named Cadet Vanto. Vanto is someone who does not have great ambition and instead is secure in his roll he assumes he will play as part of the Empire. However, knowing Thrawn’s language, and acting as a translator, Vanto is inadvertently dragged in to play a more prominent role in the Empire than he wishes. In the beginning it is happenstance. By the end of the issue it is directly because of Thrawn’s manipulation. If I wasn’t familiar with Thrawn before I would almost wonder if it was because that was Thrawn’s only way of showing affection or gratitude. A way of showing Vanto friendship, and that he knows what’s best for Vanto. However, thinking of Thrawn’s character from other media, I more wonder what Thrawn has up his sleeve, not seeing friendship, at all.

In the end, it’s most a “talking heads”comic with great facial detail that is richly colored. This combined with fascinating character dialogue makes the issue very engrossing. Fans of the Darth Vader and Doctor Aphra comics will love this addition that provides insight into yet another Star Wars villain.