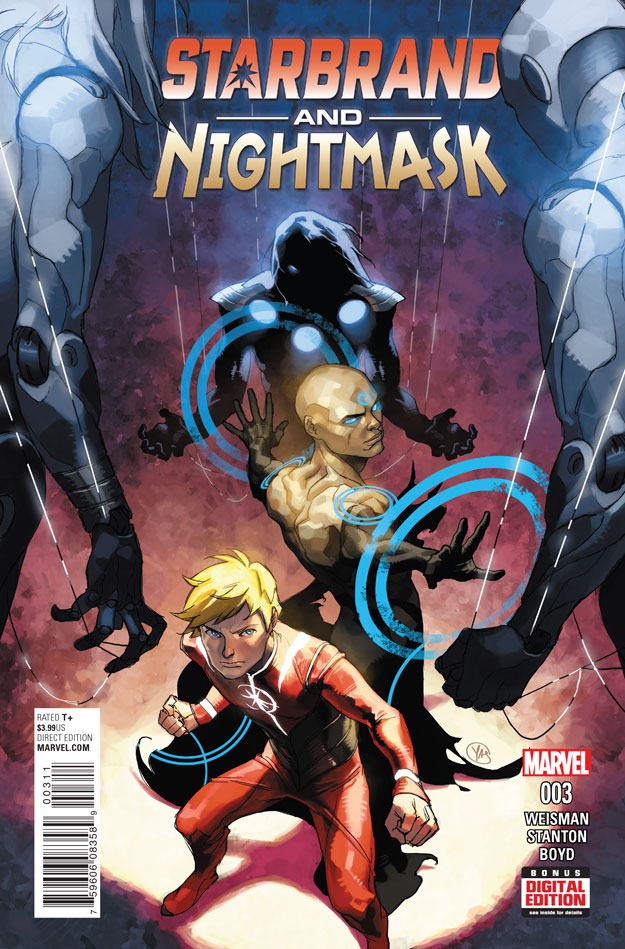 Well, that story was rather piercing.

The story is beginning to coalesce as an onlooker observes Adam and Kevin in their civilian lives. Meanwhile, the threat of Graviton, Nitro, and Blizzard is far from over, leading Adam to investigate potential cosmic involvement while Kevin defends himself against the three villains. As Adam peels back more of the mystery surrounding him and Kevin, his partner may be in dire straits as we move into the next chapter.

This issue was much heavier than the previous two. Kevin recounts his previous experience with becoming Starbrand and though this scene is short, it is rife with immense emotions. Adam is trying his best to figure out what’s going on, only to be met with cosmically cryptic information. I have my theories about what this series will amount to as we approach Marvel’s spring crossovers, and Starbrand And Nightmask #3 is ever so slowly confirming them. There’s a wonderful opportunity for this underdog comic to have some drastic effect on the overall Marvel universe.

Greg Weisman strikes me as a writer who uses small elements throughout a story to build to a much larger climax. Adam notices some strange elements surrounding him and Kevin, but also comes into contact with strange entities that point to issues of a much more grand scale than have been revealed thus far. Weisman’s use of the characters and their individual worlds drives the story by capitalizing on their inherent differences. Adam is calculating and logical, while Kevin is impetuous. These attributes come to a head for the characters by the end of the issue, and I’m ready to see what they lead to in future issues.

The art in the series thus far has captured the youth and slight naivete of our main characters, and in this issue it has a striking effect. Domo Stanton and Jordan Boyd’s style clashes with the deeper and more serious tone of the issue to create a rather jarring effect. Stanton illustrates the wide range of setting and emotions of each of the characters, and I like that Stanton’s art catches the various juxtapositions from campus to space. There are so many different settings that are essentially next door to each other but vastly disparate, paralleling the contrast between Adam and Kevin, but also their lives as students and heroes. Boyd’s work enhances this effect with bright and lively colors, helping create a world that is lively and diverse, small and immense all at once.

With other series coming out that lead up to Civil War II, I am curious as to how this series is going to progress. I’m realizing that Marvel may have a long haul setup ahead of us, and Starbrand And Nightmask has a rightful place in that order. This issue is upping the ante on the critical situation ahead of Adam and Kevin, so the next issue is bound to be pretty explosive. I’m glad Marvel gave this series a chance, because there’s a lot of potential both within its pages and in its relation to other series. Hopefully there’s going to be some big game reveals and connections as the series moves forward, and I’m excited to see where Adam and Kevin’s adventures take them.