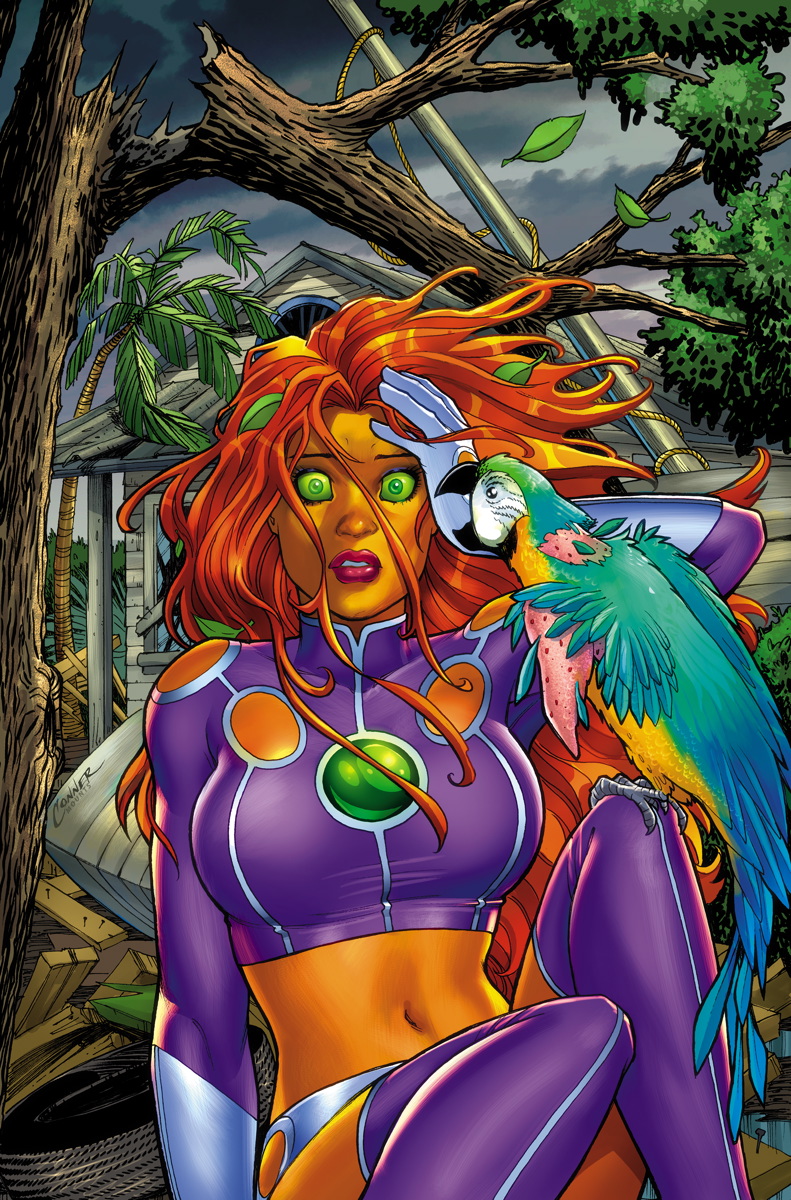 Starfire #1 created a lot of buzz as the character went in a new direction, heading to Florida and showing her strength. All the best aspects of the first issue have followed through to the second, and I’d argue Starfire has more heart than any other comic in the DC lineup.

I don’t mean that as a criticism to DC, but rather a compliment to Starfire. This issue isn’t about a hero smashing a villain in the face, or any kind of big disturbing mystery. This issue is about a girl trying to become part of a community, and helping out with a disaster. The laser focus on Starfire and this small community makes this story feel like it is in its own little world, which allows the personalities of these characters to shine. They are a likable lot, and not all that unlike Clark Kent and his interactions with Smallville, I find myself drawn in and caring about these small town, “normal” characters as much as I do some of the heavy hitters in the DCU. Conner and Palmiotti are doing a great job showing that as much as Starfire headlines this book, and her voice is awesome, regular folks can have just as much heart and personality as the aliens and powered-up heroes of the DCU.

There is a lot of humour in this comic as Conner and Palmiotti highlight some of the eccentricities of humanity through Kori’s literal interpretation of language, and I love that aspect of the character. Some of their wordplay is very clever and it all adds to the lighthearted nature of the character and this comic. They walk the fine line of having Kori not understand aspects of human culture without ever painting her as being stupid, which is very nice.

Emanuela Lupacchino is a great fit for this series, and her artwork in issue #2 is superb. The power of the hurricane is evident on every page and her pacing and layouts are engaging and dynamic. You can feel the chaos of the storm in her artwork and Kori, the star of the show, explodes from the page. The colour work by Hi-Fi takes Lupacchino’s strong pencils and makes Kori glow, quite literally, and she is very striking in this comic, in a non-exploitive way. Lupacchino’s work walks the same line as Conner and Palmiotti in showing this character as being strong despite some of her past interpretations. Lupacchino nails some of the comedic elements of the story as well, and this issue shows what a great fit she is for a character like this.

This comic is a breath of fresh air. Starfire #2 is a fun comic with clever writing, great art and a strong female lead. These characters are engaging and entertaining, and I never thought I would be praising a comic about Starfire and a hurricane, but here I am. It deserves every bit of praise heaped upon it, and if you liked any aspects of the first issue, the second issue will be a winner for you.