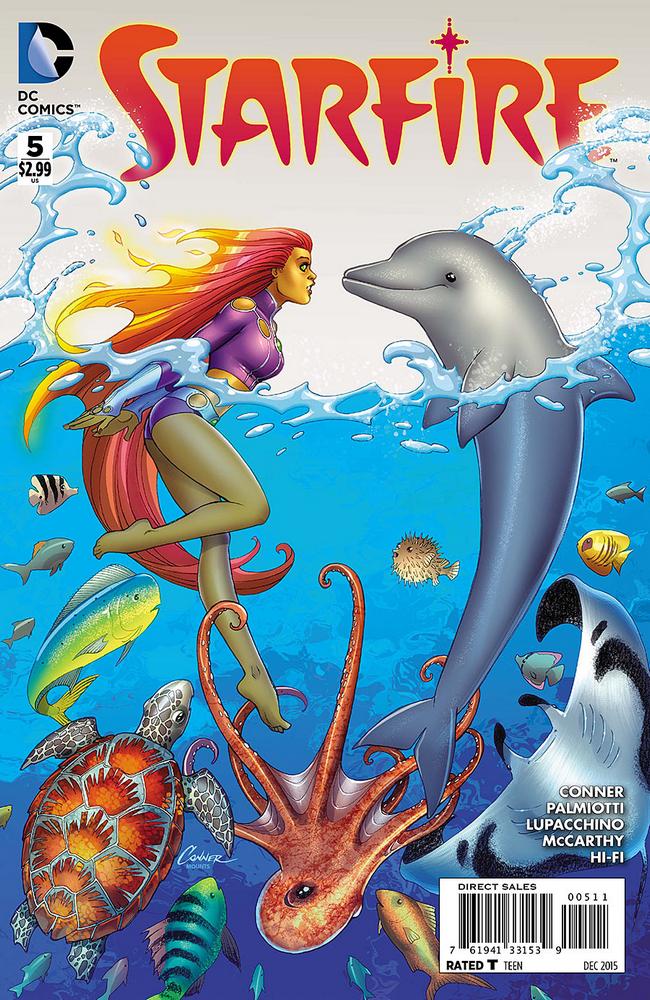 It’s a Day in the Life of Starfire, as the Tamaranian Princess settles into life in Key West with her new friends, a new job, and a first date that ends not exactly how she’d hoped. Call it Sex and the City for the super-hero set. Call it Gidget for the 21st Century. Just don’t call it Ishmael.

There’s a lot of joy to be had in rediscovering characters in a new and somewhat unpredictable setting. As a fan of the New Teen Titans throughout the 1980s, I’m not sure I ever could have predicted Starfire would work as a solo star. I was always partial to Donna Troy, the Mary Tyler Moore of the DC Universe. The woman who could be everyone and anyone’s friend. Starfire… she was a character that circled around the sun of Nightwing or the other heroes. She wasn’t the sun.

Koriand’r is definitely and finally the sun, with a full collection of satellites orbiting around her light. And it’s incredibly delightful to see.

Conner and Palmiotti take a fairly banal story layout in Starfire #5 and fill it with character moments that just make me want to know these lovely lovely people, not the least of which Starfire herself. With the naivete slightly dimmed down and the empathy and sensitivity of spirit turned all the way up, Kory is the person everyone wants as their friend. With good reason. Her warmth and (sometimes inadvertent) wit makes for genuineness that you don’t see a lot of in comics, or the world. This is a good person, good right down to her core, and when so much of what we read is about goodness overcoming the taint of evil, just plain goodness is a terrific delight.

The dialogue the writers lay out between Kory and her date, the mysterious Doctor Soren — as well as that with her bevy of friends — feels just so right for the princess. But it’s moments like the hatching of her egg stone that shows best who Starfire really is. She treats everyone with respect, unequivocally, and wishes them the best. It’s making me smile just thinking about it.

Lupacchino breathes this kind of powerful light into Kory throughout these pages that really captures her spirit perfectly. Starfire’s body language always reads as effortless and comfortable, and so having pencil work that conveys such ease builds on that emotional read. The colors by Hi-Fi definitely give Starfire that inner and outer glow, but doesn’t let her “alienness” feel out of place among the multi-racial cast or tropical setting of Key West itself. The art team has really pulled out all the stops to give this sense of a place where Kory really does fit in, where she can sit in a coffee shop and not be out of place. It’s not that she’s inconspicuous. Far from it. But she is part of it all. Not hidden. Integrated.

There’s so many opportunities for cheesecake in this title that are either thankfully passed by or embraced and owned with respect to Starfire’s agency by Lupacchino. When we see Kory in skimpy clothing, it’s not at the other end of a (metaphoric) teenage boy’s telescope. There’s no flaunting, nor self-consciousness in the artist’s renderings and that makes all the difference in how far Conner and Palmiotti can take the humor. I laughed out loud at a boob joke which A) is totally not my thing, and B) is normally something I squint my eyes at. But the feel of the page, the personal connection Lupacchino has built between me and the characters, and tan atmosphere lacking in exploitation cuts through those standard expectations for me. I can laugh because it’s funny, but also because there’s not a pile of problematic content my brain needs to sort through first.

Truth be told, if you’re solely looking for a beat them up adventure every month, Starfire is probably not going to make your pull list any time soon. True enough, this issue feels like a calm before a storm, but it also feels like something that I could embrace on a monthly basis — a world of characters living their lives with funny stuff happening and an occasional earth-monster to fight. I daresay, it would be hard not to want more of what we get in issue #5 once we’ve seen how lovely a character Koriand’r really can be. Because like Atlee, Stella, Benji, Sol, and all the other inhabitants of Key West, I want to be Starfire’s friend too.